The SuperCrypt drive might be fast, as we’ve seen, but that’s not its only feature. As the name suggests, this drive features a robust encryption scheme to help you protect your data from prying eyes. Utilizing a 128-bit AES cipher, your data is going to be for all intents and purposes, very secure.

The scheme isn’t quite as robust as some other solutions on the market, however, and that’s where Super Talent’s “SuperCrypt Pro” comes into play, which cranks up the effectiveness of the AES algorithm to 256-bit. Not only is the cipher strength increased, but also the method of encryption, so if you are truly serious about protecting your data, the latter solution is going to be better. Unfortunately, Super Talent doesn’t currently offer a “Pro” version of the drive in a USB 3.0 model… yet.

Using the encryption on this drive is simple. After plugging the drive in, you’ll see something similar to this: 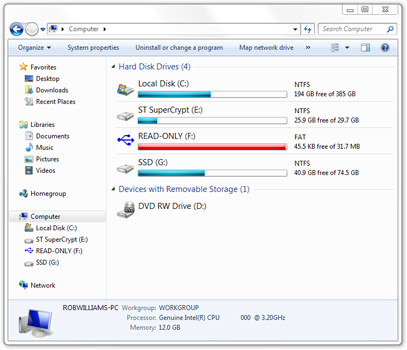 The F: in the image is a read-only drive that’s just large enough to house the encryption software, while E: is where your actual data is stored. By default, the encryption is disabled, so to enable, you need to allow the auto-run to work, or you can access the lone executable in the F: drive to launch the process. 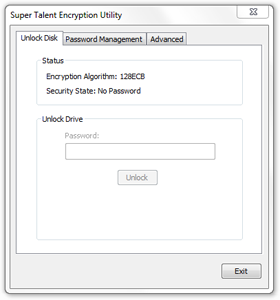 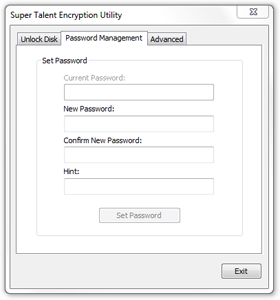 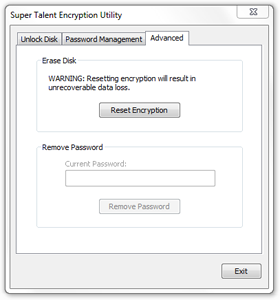 After launching the tool, you need to head to the Password Management section and input a password. After setting, the drive will require a password each time you want to access the data (or rather, each time you plug the drive in). No password, no data… it’s simple. To remove the protection, you need to head on over to the final tab, Advanced, and click “Reset Encryption”, at which point you will need to type in “ERASE MY DISK” and hit enter. This resets the drive to factory status, meaning all data on there will be lost. You don’t need a password to this, so if you end up forgetting your password, the drive isn’t going to be bricked.

In quick tests, using the encryption feature on this drive didn’t affect the performance at all, which suggests that there’s a special hardware chip that takes care of the task, rather than this being a completely software-driven solution. The benefit there is no performance degradation, which is important given that most people who purchase this drive are doing so for that reason.

Super Talent has mentioned to us that it plans to release a tool in the near-future that will remove the encryption feature from this drive, primarily meaning the removal of the read-only partition, for those who don’t care about encrypting their data and have no intentions of ever using it. The company said it wouldn’t be likely that it would release another tool to add the feature back on, so you’d have to be certain about removing it to avoid regretting the decision later.

As Super Talent’s SuperCrypt is the first USB 3.0 device I’ve really had the chance to benchmark and test thoroughly, coming up with a conclusion here is a bit tough. In the weeks and months ahead, we plan on testing copious amounts of USB 3.0 devices, so we’ll be able to develop a better understanding of what’s out there, and where one drive might excel compared to another.

Having no basis for comparison at all, I’m left impressed with Super Talent’s offering here. I admit that the design of the drive itself doesn’t do too much for me, but it’s a vast improvement over some of the company’s other products (aesthetics have never been Super Talent’s fortÃ©). This is a rather stark contrast to say, OCZ’s Enyo USB 3.0 drive, where the company wanted to make the drive look just as good as it performs.

All of that aside though, the SuperCrypt drive performed exceptionally well, with both the drive’s read and write speeds being quite brag-worthy. Below is a screen capture that pretty much sums up just how fast the drive can get in an optimum setting. This was taken after a cold boot, so very little, if any, caching was going on. That’s fast. 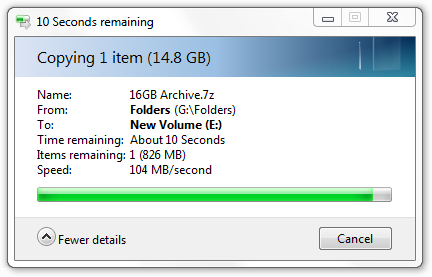 Currently, Super Talent’s SuperCrypt drives are not that inexpensive. The 32GB model we’ve taken a look at retails for $170 at Amazon.com, with the 16GB selling for around $120. By comparison, the company’s Express Drive, also USB 3.0, sells for $120 for 32GB. The speed is far degraded, but is still quite impressive compared to a typical USB 2.0 device. Super Talent told us that the Express Drive 32GB could reach 90MB/s speeds in real-world tests, and we hope to soon get one of these in, since the price-point is a bit more manageable and speeds still excellent.

When all said and done, I’d recommend the SuperCrypt drive, but that’s going on no basis for comparison. I’m impressed, but as I’ve yet to test out other USB 3.0 drives, I can’t outright state that this is one of the best drives on the market. I hope to get more into our lab soon (an OCZ Enyo is waiting for me, but has remained untouched due to Computex). If you want to get a better view of how this drive and other USB 3.0 storage devices compare to each other, stay tuned to the site as we’ll be working hard to get lots more information up.