The chassis market is full of common names, but it’s not often a new player comes along that really impresses. Tagan is one of those rare companies who delivers a full-size case that is well worth your consideration.


With everything as it should be, the finished product should look something like this when behind the clear side panel. 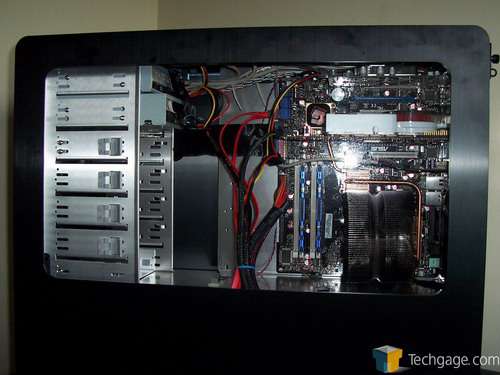 The last thing to cover is front LCD display and fan controller. With the A+ logo on the left, lit up in a light blue, the thermal probe results, as well as fan speed are shown in a bright red. This is a neat feature but I do not like the fact that individual fans cannot be controlled independent of the others.

Whatever speed one fan is spinning at is the speed that all of the fans are spinning at. The speeds are controlled with the two buttons on either side of the LCD display. The left button speeds up the fans and the right one slows them down. Simple and to the point but ultimately not as complete as most would like. 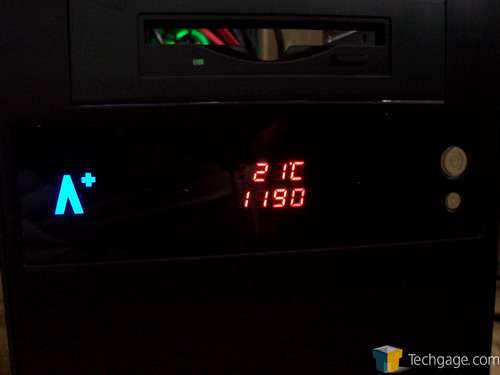 As in all of our past case reviews, we will look at the cooling capabilities of the case and compare it to past results. The hardware used has remains constant with the only difference being the case itself. Our results do provide a decent idea of the cooling capabilities of each chassis but do contain a slight margin of error. It is difficult to maintain the exact same ambient temperature from evaluation to evaluation so please keep that in mind when reading the graphs.

In our tests, we report the temperatures of both the CPU and GPU when at an idle state, as well as under 100% load. To get the cores of the E6600 working at full steam ahead, CPU Burn-In is used, one instance on each core. This is setup to run for an hour with the caseâ€™s side panel in place. At the end of that hour, the temperature is recorded using Core Temp Beta 0.94. As stated earlier, the fan on the back of the case is installed to pull in outside air. To accommodate for this, the Zalman 9700 is installed in the same fashion. Air is brought in through the fan and the pulled through the Zalman. 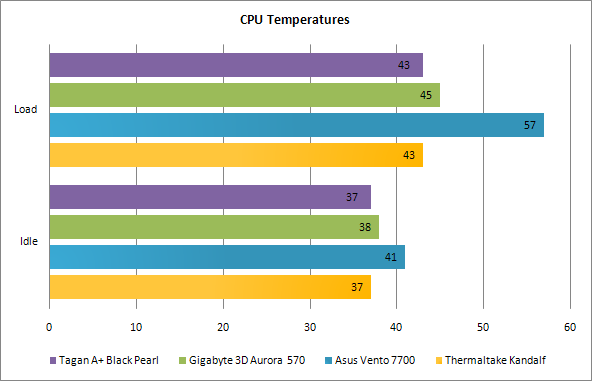 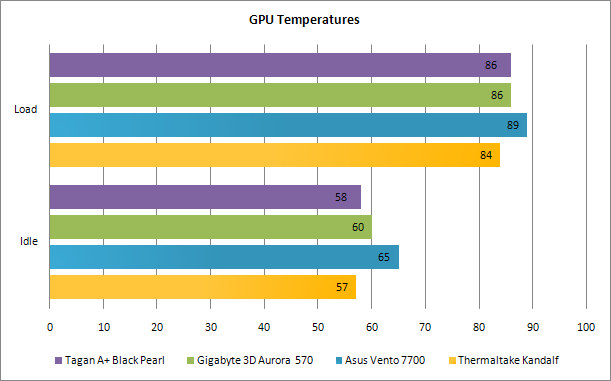 While not the best performer, the Black Pearl is right up there with the Thermaltake Kaldalf, the best performer in the group. While the lower the temperatures the better, we really cannot complain with what we have seen out of Taganâ€™s A+ flagship case. The performance of air cooling is average and the graphs reflect this but the true beauty of the Black Pearl lies in the features. There arenâ€™t many cases that I have seen with more room, more expandability and more potential than the Black Pearl.

The all aluminum, thick aluminum at that, design makes the case light and the single piece used for the main part of the body adds to the stability. The top mounted I/O ports along with the area seemingly designed with water cooling in mind make this case the single best case this editor has ever worked with. Add onto that attention to detail included fan controller and the Black Pearl is a gem with gads of potential under the hood.

With that in mind though, our experience was not exactly a bed or roses. The fan controller, while a nice addition, could have had a bit more functionality and just underneath it, we would have liked to have seen holes for the front fan to breath a bit more freely. We also feel that a hole towards the back of the case, on the bottom of the motherboard chamber would be a nice addition as it would allow more areas to route cables to the motherboard.

With all of the ups and downs taken into consideration, itâ€™s clear, at least to this editor, that the pros far outweigh the cons. Itâ€™s because of all this that the Tagan A+ Black Pearl earns a 9 out of 10. It also earns an editorâ€™s choice award for itâ€™s great potential. The only down side is the price. Weighing in above $200, the Black Pearl isnâ€™t cheap but for what you get, a clone of a very good Lian Li, your getting your moneys worth.