Taking It To The Limit: Overclocking NVIDIA’s GeForce GTX 970 & 980

by Rob Williams on September 26, 2014 in Graphics & Displays

We’ve established that NVIDIA’s Maxwell-based graphics cards are impressive, but can they continue to impress when it comes to overclocking? As it turns out, yes – yes they can. Given their ability to push clocks far beyond stock, we’ve even decided to take up a challenge: Can an overclocked GTX 970 match a stock GTX 980?

With our look at NVIDIA’s Maxwell-based GeForce GTX 980 and 970 out-of-the-way, I thought I’d spend some time taking a look at them again, but this time from an overclocking perspective. When we were briefed by the company a couple of weeks ago, it made a point to say that Maxwell was a very overclockable architecture, and as the results here will prove, it wasn’t joking.

For GTX 980 overclocking, I’ll be making use of NVIDIA’s reference card, whereas for the GTX 970, ASUS’ Strix will fill the role. Both cards will be interesting to look at from the overclocking perspective, but as the GTX 970 comes equipped with an impressive overclock already, it might prove to be the more interesting of the two.

Before we take a look at the results, I want to explain what I consider to be a good overclock. First and foremost, it has to be stable. If I can’t hammer the card with benchmark after benchmark and see it pass a two-hour stress test, I don’t consider it stable. I think overclocks should be realistic, and not push the boundary so far that a user risks their PC crashing while in the middle of a game. Secondly, I take care to not go overboard – I boost the power target by 10%, and the peak temperature by 5°C (which, as it happens, isn’t needed).

Let’s get right to it.

Since the launch of the GTX 900 series, I’ve looked around to get an idea of what these cards could be overclocked to, and I’ve seen many go beyond 1,400MHz. I simply couldn’t. Any time I thought I found a stable overclock beyond that, subsequent 3DMark runs proved me wrong. While I do believe this particular sample could go a bit higher on both the Core and Memory, the clocks I reached are definitely safe in terms of stability. 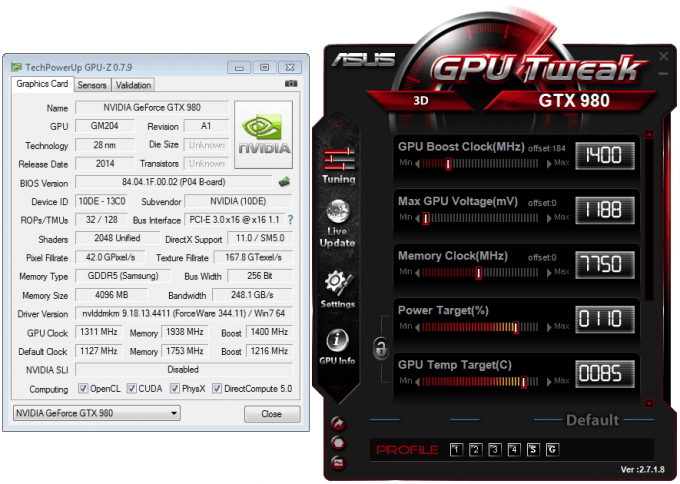 Because an overclock on a current NVIDIA GPU doesn’t take into account GPU Boost, any clock you set will in actuality go higher when playing a game. In my particular case, I saw the GTX 980 peak at 1,450MHz, with clocks at around 1,420MHz being seen more often than the flat 1,400MHz.

I’ll personally never bother with a GPU overclock unless it adds a substantial gain to the FPS, and with the GTX 980, we’ve got one.

In my look at the GTX 980 last week, I mentioned that with an overclock, the card might be able to hit 60 FPS in AC IV: Black Flag with the multi-monitor resolution of 5760×1080, and while that didn’t quite happen, it did come close (58 FPS). The overclock did however manage to propel the performance to 60 FPS for Sleeping Dogs and Splinter Cell: Blacklist.

I’d wager that for most people, an overclock with this card isn’t entirely worth it if you’re running 1440p, because as the results highlight, the card can already hit 60 FPS in most titles. If you do go with an overclock though, you might be able to take advantage of some of NVIDIA’s luxury features, like TXAA and HBAO.

I mentioned in my look at ASUS’ Strix the other day that ultimately, I think the GTX 970 impresses me more than the GTX 980 (at least from a bang-for-the-buck perspective), and as it happens, that carried straight on through to overclocking. NVIDIA’s reference GTX 970 is spec’d at 1,050MHz Core and 7,000MHz Memory. Because I don’t have the reference card, I have no way of knowing how GPU Boost will affect the clock, but I’d imagine it’d gain about 125MHz like the GTX 980 did. 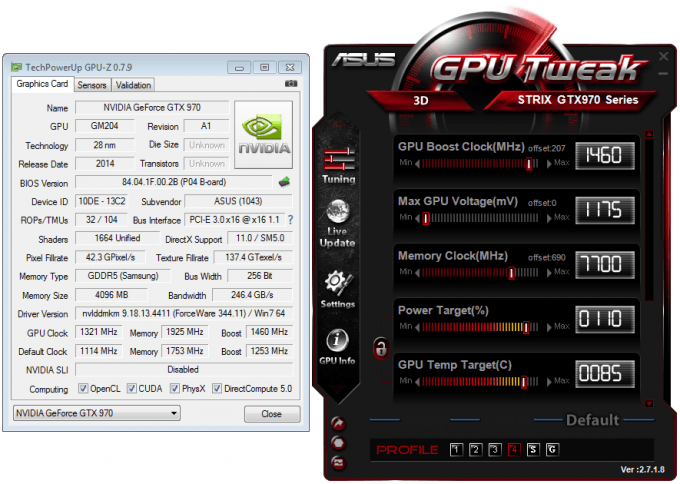 ASUS’ Strix card is already overclocked out-of-the-box, and it’s no minor one, either: +203MHz. With GPU Boost, I’ve seen the card peak at 1,303MHz. Given that, I couldn’t have imagined that the card would overclock much further. I just figured that ASUS kept shy of the ceiling and ran with it. I was wrong – I managed to tack another 207MHz on, making it an effective 1,460MHz. Once again, GPU Boost helped bump that further, with a peak of 1,510MHz being exhibited in my testing.

Think about this for a moment. The GTX 970 is clocked at 1,050MHz, and presumably could hit 1,175MHz with GPU Boost. And here, with this stable overclock, the card gains at least 335MHz to that peak. That’s unbelievable.

The overclock on this card isn’t just nice to look at, it manages to give us some sweet FPS boosts in our games, with at least +10% being exhibited. With this kind of gain, I can’t help but wonder if this overclocked GTX 970 could match the performance of a reference GTX 980…

When a GPU launch occurs that sees two models one step apart from each other being released, it’s always fun to wonder if the smaller of the two cards could be overclocked enough to match the bigger one. As far as I can remember, I’ve never been able to see that happen, and obviously, it makes sense why you wouldn’t. GPU vendors like NVIDIA wouldn’t willingly allow that to happen, would they?

Yup – they would. Check this out:

Overall, the cards are basically matched, with each one trading punches depending on the game. It might be worth reiterating the prices of these cards: ASUS’ Strix is $340, and the reference GTX 980 is $549. 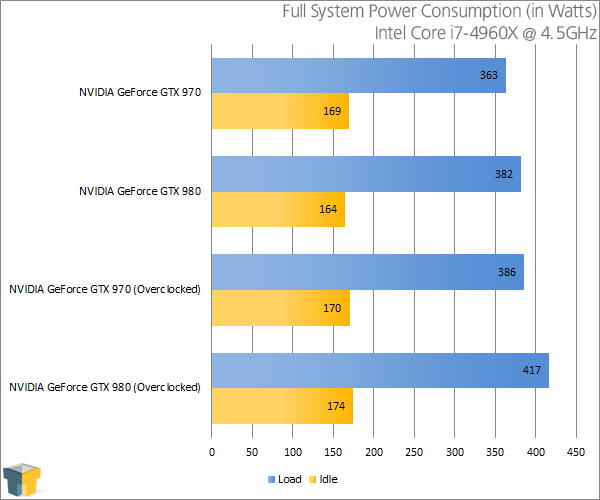 I have a confession to make: I’m not big into overclocking. While I appreciate competitions and big overclocks in general, I can’t remember the last time I actually overclocked my own gear, to eke that extra little bit of performance out of it. This is especially true with GPUs. I’ve always found that the added stress to the card simply wasn’t worth a ~5% boost.

Well… Maxwell has changed my perspective on that. I might be wrong in believing this, but I feel like normal overclocking is “safe” on Maxwell, or at least “safer”. The high clocks I reached did increase power consumption a bit, but according to our logs, they didn’t increase the peak voltage or the peak temperature – ASUS Strix’ still topped-out at 69°C and the reference GTX 980 peaked at 80°C. 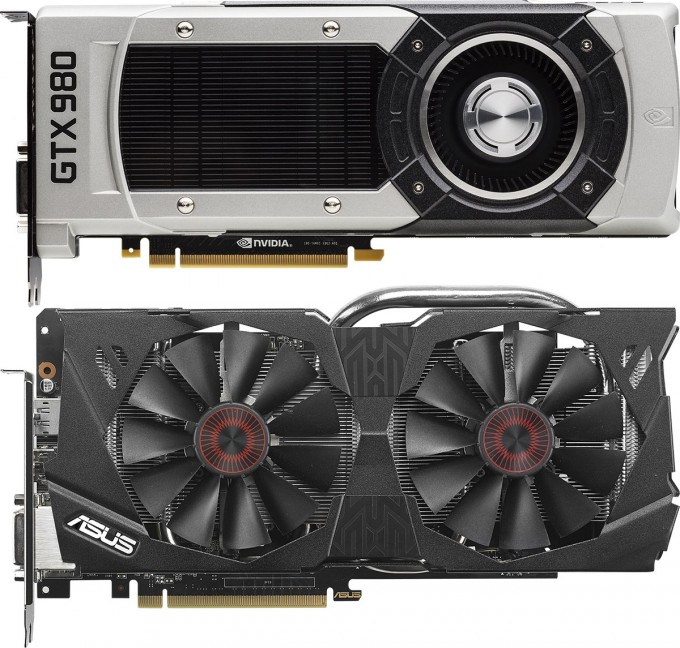 As evidenced by the results above, 1440p gamers don’t stand to gain as much as 4K or multi-monitor ones in terms of sheer framerate, as both the GTX 970 and 980 are powerful enough to handle that resolution without much issue to begin with. That doesn’t mean that overclocking is pointless with that resolution, though – it could allow you to bump up some settings you don’t often touch, like ambient occlusion and perhaps even anti-aliasing.

After taking a hard look at both the GTX 980 and 970 over the past two weeks, I’ve been left impressed. In fact, I can’t remember the last time I felt quite so impressed after a new GPU launch. And that feeling came before the overclocking perspective. These cards are simply nuts – in the best kind of way.