Having yet to test out a NAS, I wasn’t sure what I would run into during my time with the N2560. What I found was solid hardware, a well-thought-out Interface, and a lot more bells and whistles than expected.

Having 2GB of RAM certainly helped to cut down the amount of time needed to build a RAID volume, and the dual-core processor kept things feeling snappy. The drive rails are a bit different, since most units that I’ve checked into either use drive trays, or the drives simply slide straight into the bays. Regardless, they did the trick and kept the drives nice and snug.

Moving onto the Web UI, to say that it’s robust would be an understatement. Even with a few quirks, all of the options are there for even the pickiest of administrators. For less savvy users, the setup and configuration is about as easy as it comes, and having a full version of Acronis True Image Personal included is a huge bonus. Rob mentioned a lack of WebDAV support on the more expensive N5550, but it’s included on the N2560, which is great for those who wish to access their data from a mobile device. 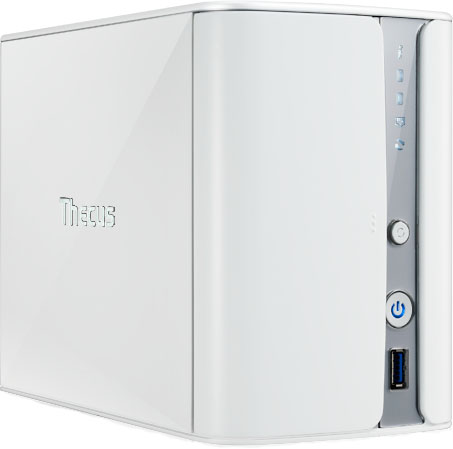 File transfer speeds are really nice across-the-board as well, although the storage limitation of 12TB, or 6TB if setting up RAID 1, might cause some to pass over this NAS. Again, this is meant for home or small office use, so 6TB of storage should be more than enough. If you’re looking for more, it’s likely that this NAS was never on your short list to begin with anyway.

Now here’s the catch. Jumping straight into a NAS can be pricey for most users, but the gains more than outweigh the price tag. The N2560 can be had for about $300 US, which might sound like a lot before even stopping to factor in the cost of drives to fill it. When you considering the features and performance however, it’s easy to forget about the Benjamins that you’re about to fork over.

In the Thecus N2560 you get a NAS that performs well, is small, quiet, has a low power draw, and is one that we wholeheartedly recommend.