by Rob Williams on September 26, 2012 in Networking, Storage

In an environment where uptime and data security is of paramount importance, a 5-bay NAS is an interesting proposition with its allure of huge storage and the ability implement a hot spare. Thecus’ N5550 only adds to the intrigue with its huge feature-set including a USB 3.0 port and 2GB of RAM. Let’s see if the other features can seal the deal.

With the flooding that occurred in Thailand last fall, many who were planning on putting together a NAS had their plans side-swiped. Who wants to spend $500 or so on a quality NAS and then $1,000 for 8TB of storage? Not me. Fortunately, prices have steadily come down over the past year, and while we’re not quite at pre-flood pricing, we do seem to have settled.

Last fall, a WD Green 2TB could have been snatched for about $80 with a good sale, but today, you can expect to fork over about $110. That means that for a typical 4-drive setup using 2TB drives today, you can score 8TB for about $440 – much improved over the $800+ that the same density would have cost 10 months ago.

To help usher in the fact that people can actually afford hard drives again, Thecus has brought to market a follow-up to its popular 5-bay offering, the N5500. The N5550 (note the third 5) brings a faster CPU, more RAM, USB 3.0 and a general fine-tuning of things. It also sports Thecus’ latest “OS”, dubbed ThecusOS 5.0. Users of one or two-year-old Thecus NAS products will notice similarities, so the bulk of what’s new is features that you’ve either been waiting for or just happen to stumble-upon. 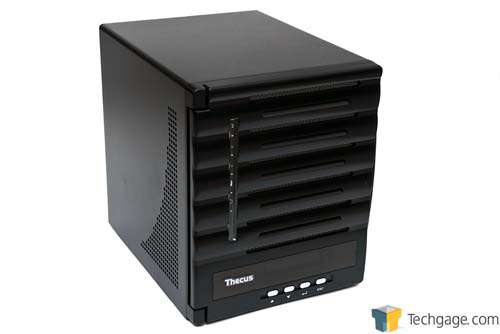 Thecus considers the N5550 to be an ‘enterprise’ product because it includes a fifth drive bay, whereas all of its official SOHO/SMB products include only four. But – most enterprises are going to want more than 5 bays, so more accurately; it’s an SMB/SOHO product based on that and pricing.

For business environments, the fifth bay will commonly be used as a spare, automatically introduced to the RAID in the event of a drive death, while for SOHO, users may consider using higher RAID levels that take advantage of all five drives. My personal usage scenario is 4 drives in RAID5 for content and backup, and the other for torrents and other randomness.

As seen in the photo above, the N5550 isn’t quite as attractive as the 4-bay N4200 series, with all of its OLED screen goodness, but it’s suitable enough. For a couple of reasons, Thecus stows most of the buttons behind the door, such as the power and reset. Some might find this clunky, but it does prevent accidentally turning the device off, as a single hit of the power will initiate the shutdown process.

Before we take a tour of the NAS, let’s first take a look at what it brings to the table with its hardware and software.

For SMB/enterprise use, performance is imperative, and for that reason Thecus has equipped the N5550 with one of the beefiest Atom processors around and doubled-up on the memory. This will not only keep the NAS running at top performance all the time, it’ll drastically reduce the amount of time it takes to rebuild a RAID array. The N5550 includes dual LAN ports, one WAN and one LAN, which can be joined together for things like load balancing or failovers. One of the best additions over the N5500 is USB 3.0, although it’s a shame there’s only one port made available.

HDMI and VGA outputs are included for those who may want to hook up a keyboard and mouse to the NAS and use it directly. There’s also an unofficial XBMC module available in case you want to go the full-blown media center route. Many other third-party modules can be found on the official Thecus forums.

The N5550 supports the regular gamut of RAID levels, but for some reason only ext3/4 and XFS file systems. Normally this wouldn’t strike me too odd, but many of Thecus’ previous NASes supported ZFS also, which is the route I would personally take if I had the option. It could be that ZFS is taking far too long to become ‘finalized’ that Thecus had simply decided against supporting it, but it still seems like an odd omission nonetheless.

In addition to the NAS being able to hot-swap drives, it’s also able to designate a drive as a “spare”, used only if one of the other drives in your RAID happens to drop off. Thecus also touts disk roaming support here, so if in the future your N5550 gives up the ghost, you’ll be able to migrate your drives over to another N5550 without the risk (I use the term loosely) of losing your data.

A potential downside is that the N5550 does not support IPv6, and I’m not quite sure that’s something a third-party module could even fix. Thecus might in the future, however, as it requires no hardware upgrade, but given the slow roll-out of the latest Internet protocol, the company must not see it as being a very important feature. In truth, it probably isn’t, but if you’re behind an ISP that does offer IPv6, the option would be nice to have.

Like most NASes, this one runs on a variant of Linux; Red Hat to be exact.

On a desktop, a 2.6.38 kernel would seem horribly out-of-date (it was released spring 2011), but for a server / NAS where stability matters, it’s actually quite modern. While Red Hat acts as a base, this is actually a very scaled-down version of Linux, so normal Red Hat commands, such as “yum”, are not going to work. Any software you want to install needs to be handled through the NAS admin itself, which means it needs to be in module form.

Please note that our information tables above are grossly minimal compared to the official ones, so if you want to know everything that this NAS is capable of, I’d highly recommend looking at the official product page.