The first-ever NAS we took a look at was a dual-bay Thecus N2100. We are returning to those roots today by now taking a look at the single-bay N1200. We were pleased to see that Thecus once again delivered a well-built NAS that’s not only strudy, but packs in numerous useful features as well.

It’s been over a year since we looked at our first network-attached storage device, the Thecus N2100, and in that time, we’ve taken our fair share of looks at other offerings from other major players in this industry segment. We’ve worked with Synology, D-Link, QNAP, Vantec and Matrox and found them all to give users, in one way or another, a centralized place to deposit those files we can’t afford to lose conveniently on their home network.

As we have stated time and time again, a reliable backup procedure is an absolute necessity, eliminating the possibility of a single point of failure bringing down your entire collection of data. Fortunately for us all, one event has happened recently that has allowed the simple NAS to permeate homes across the world… the price per gigabyte in today’s hard drives.

What once was a distant hope, 500 GB drives and higher have come down to a price that almost anyone can afford to purchase, and BYOD NAS companies have been close behind offering their goods for anyone interested.

This has undoubtedly been a very good shift in the storage market. As more and more households create their own home networks, the ability to access the family’s data from one centralized location has been a long time coming. No longer does the PC designated as the “storage” computer need to stay on at all times. No longer do clunky workgroups need to be setup either. Network-attached storage allows your data to be shared by simply mapping the devices drive to your local PC and for those not familiar with this process, most companies provide applications that will make setting-up easy. Now is definitely a good time to be on the lookout for a NAS of your own.

While NAS is available in many different varieties, ranging from single disk to multiple, RAID 5 capable machines, we are looking at another single drive box, the Thecus N1200. While most NAS boxes allow simple Ethernet connectivity with an additional USB or eSATA port for expandability, Thecus has taken the conventional set of connectivity and thrown it to the wind. Coming equipped with a four port 10/100 switch, the N1200 adds to its value by providing extra connectivity for those that could use the extra ports.

Our first impressions of the N1200 were ones of excitement. While the N2100 that we looked at in March of ’07 was built out of plastic, the N1200 comes equipped with an all metal body with the only plastic on the NAS being in the front bezel. Designed to be set upright, I suppose you could set the thing on its side if space is of concern to you (risking that pesky red ring of death… wait, wrong device). Being as well designed as the N1200 is, I can’t see why you wouldn’t want to use the thing vertically. 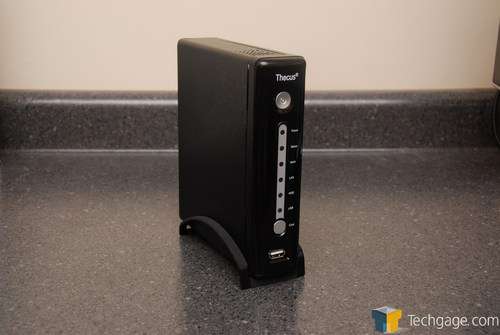 Taking a closer look at the front panel, we can see a set of buttons, a lone USB port and six led indicators. Running from the top down, we see a large silver power button, LEDs for power, status, WAN, LAN, hard drive activity as well as USB. Wrapping up the front of the NAS is a silver button labeled “copy”. This is used to copy the contents of and attached USB drive onto the installed drive in the N1200. The all black look works for the N1200 and when the activity lights are doing their thing; the device is a rather nice looking. 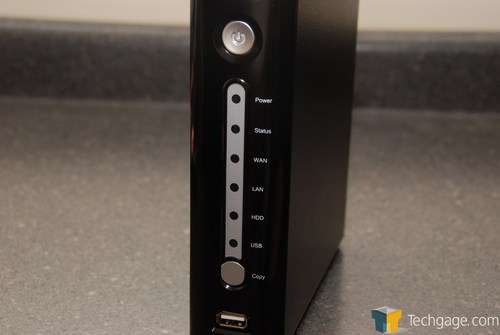 Flipping the N1200 around to the back, we can clearly see the built in 10/100 Mbps switch. Moving from left to right, there is a power connection, reset button, 1 WAN Ethernet port, 4 10/100 Ethernet ports, USB and eSATA ports and a Kensington lock slot. If you notice in the upper right hand corner of the N1200 there is a wireless symbol. For those who can find a compatible wireless card, there is a slot for it on the N1200’s motherboard. One thing to point out is that each port on the back of the N1200 is well marked, hopefully eliminating any confusion that could come up. 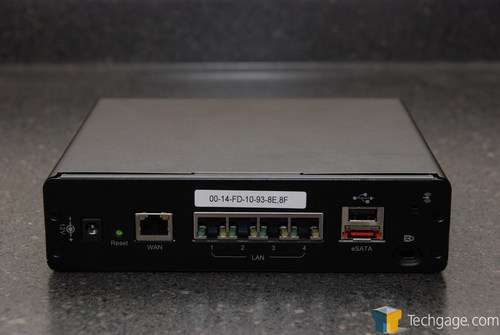 On the bottom of the N1200 there is a single 30mm fan. This actively cools the installed hard drive and has two speeds, normal and hurricane. It will be interesting to see how well it keeps the internals cool, as well as at what cost to your ears. Just above the fan we can see a small Phillips screw. This, along with one other screw on the other side of the N1200, must be removed in order to get the NAS apart to install a hard drive. 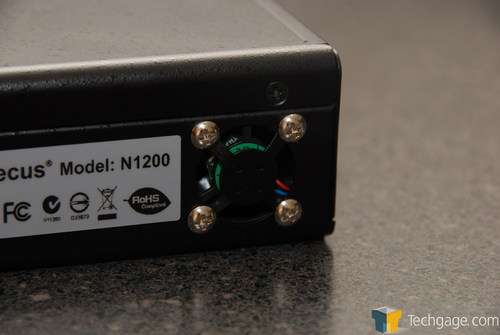 One the two screws are removed, all that is needed to split the N1200 apart is to gently pull one side opposite of the other. When putting the NAS back together, we must make sure the tabs align properly; otherwise the two sides won’t sit even with each other. 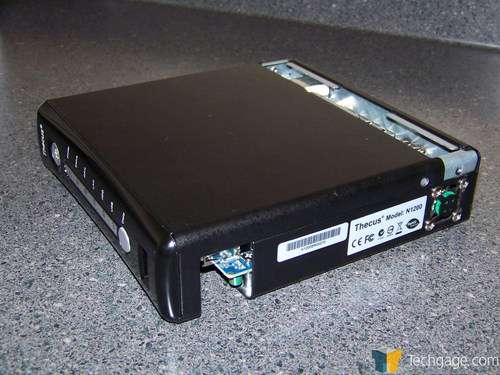 With the N1200 open, there is a simple hard drive tray that holds the disk drive. Secured with four screws, the tray is slid into place, locking the power and data connections in place and then in turn, is secured to the motherboard of the N1200. As in all of our other BYOD NAS reviews, our 750GB Seagate Barracuda test drive is used. 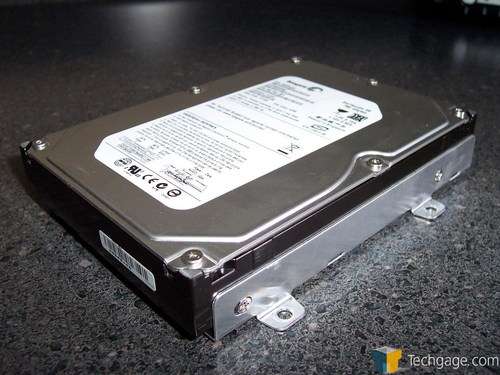 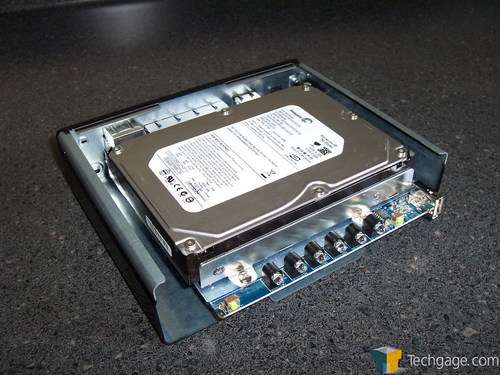 When everything is in place, simply set the N1200 in the included stand and your ready to set up your NAS. To protect desktop surfaces, the stand for the N1200 is covered with a felt like material everywhere that touches the surface of a desk as well as the surface of the NAS itself. 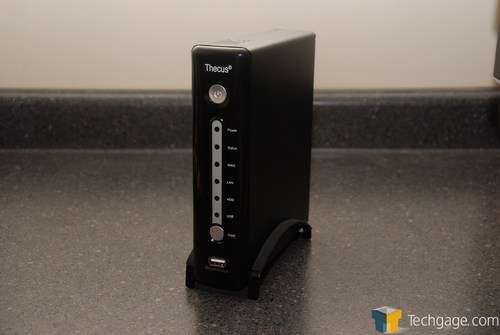 Bundled with the Thecus N1200 is a quick start manual, a software disk and a warranty card. Like with the QNAP and Synology devices we have looked at in the past, the disk included with the N1200 contains a locator application, software for the NAS itself as well as documentation in .pdf form. 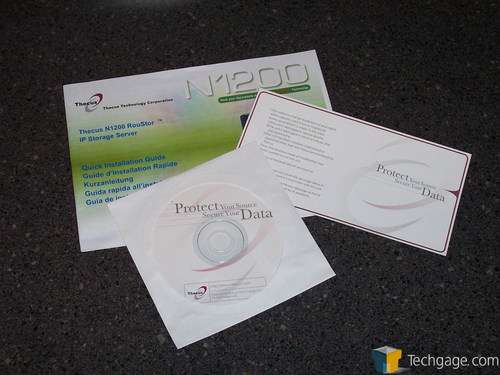 Aside from the stand, Thecus also includes a short length of Cat5e cable, a hard drive tray, power adapter and cord. This is certainly nothing that stands out but certainly enough to get you going right out of the box. 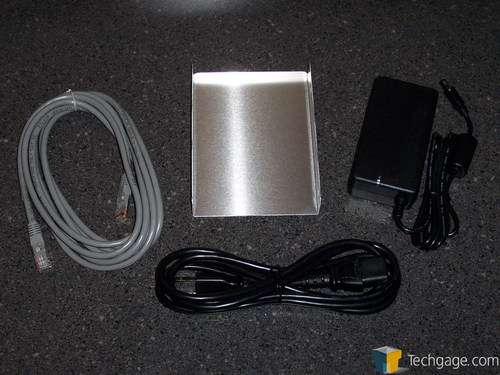 Taking a closer look at the PCB itself, we can see that the Intel IOP processor is kept cool with the help of a small aluminum heatsink. The seven fins on top of the sink should help heat dissipate away from the CPU and out the breather holes on the top of the N1200. Surprisingly enough, Thecus has placed 128 MB of RAM on the board of the N1200. This is interesting for no other reason than that for a “home” oriented NAS device; this is a considerable of system memory. Unlike its bigger brother, the N1200’s memory is integrated into the motherboard whereas the memory on the N2100 could be expanded by simply putting another stick of RAM. 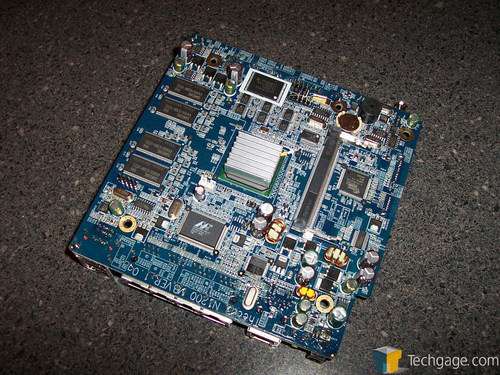 Taking a closer look at the memory, we can see that the 128 MB of RAM is provided courtesy of Samsung. There is also a Marvell Ethernet controller chip located just above the CPU. 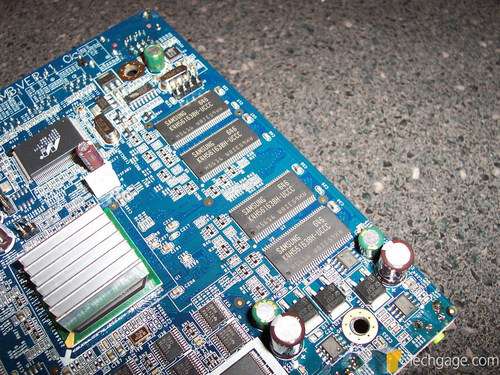 We finish on a Silicon Image SteelVine SATA chip. This chip controls the SATA port for the hard drive as well as the eSATA port located externally on the back of the NAS. The most interesting thing about the chip is not what it does but where it’s located. Positioned directly beside the wireless PCI card bus, the SATA chip would sit underneath the wireless card should one be installed. As of writing, there are only a few supported cards and more information can be found at Thecus’ website. 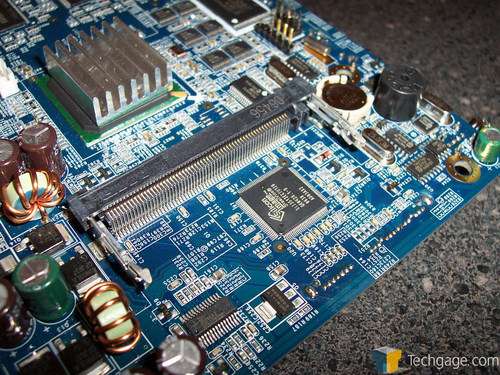 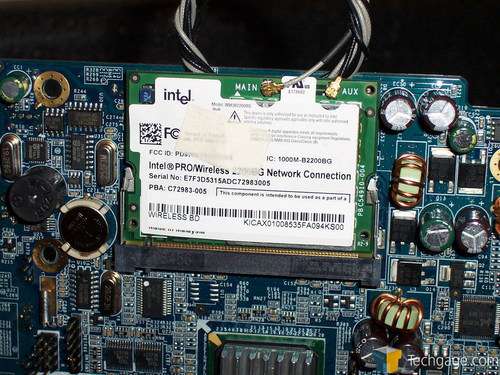 Now, let’s take a look at the setup and software.