As is the case with most server cases, the Eureka offers a great deal of space to work in. The motherboard tray is not only marked well, allowing the motherboard standoffs to be installed correctly, but it is also removable. This is something that we would like to see more case manufacturers use in future designs. Itâ€™s a simple premise but one that is greatly appreciate by everyone that I know. 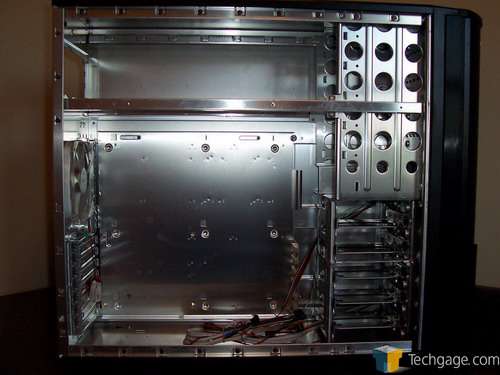 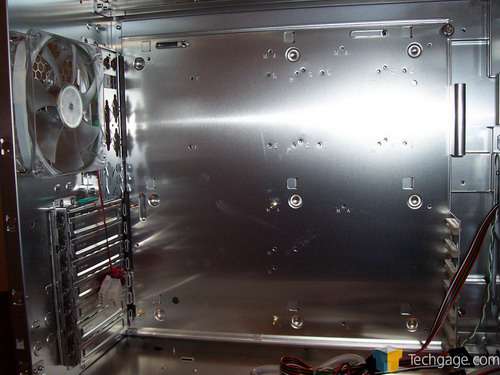 At the front of the case, the hard drive trays are rotated 90 degrees. This is another thing that we would like to see more and more case manufacturers start doing as it makes installation a breeze, but also helps sometimes with cable management. 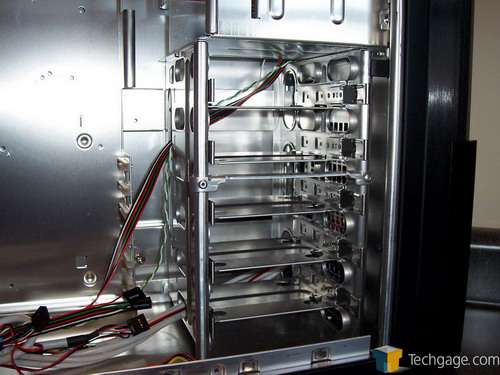 As the next picture implies, the hard drives are attached to a small frame that in turn, slides into the rails. Itâ€™s as simple as that. 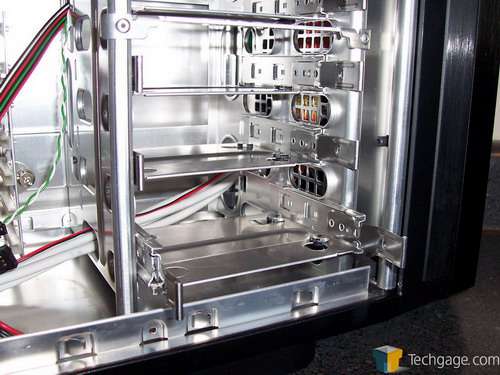 The rails themselves are constructed out of aluminum and have four raised areas on the bottom. These holes are used the mount the hard drive onto the rail. 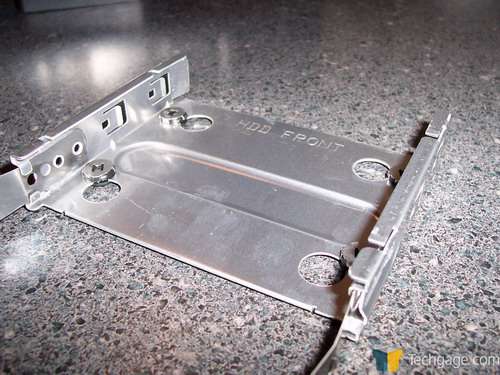 The inside of the drive bays only have small round holes that the rails sit on when the drive is installed. 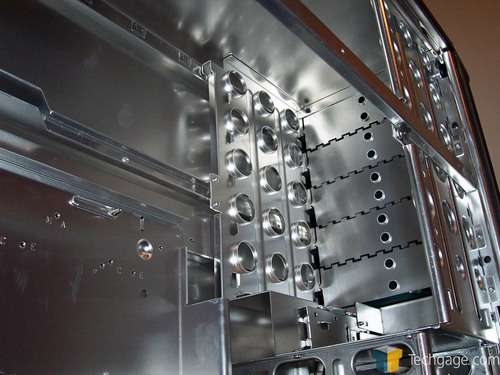 To control the front power and reset buttons, as well as use the side mounted USB, FireWire and audio jacks we first will need to use the included connectors. There is a cable for each and each one is long enough to reach across the long case if needs be. 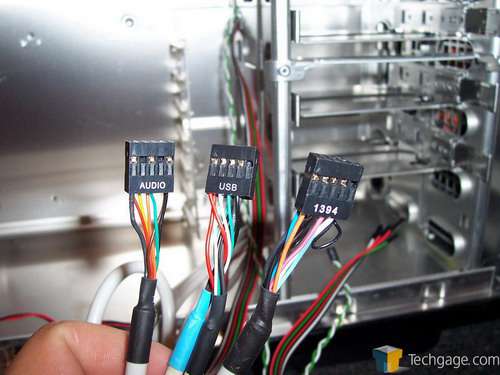 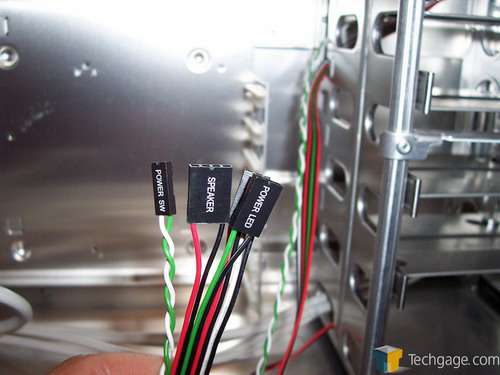 The back of the case includes a single 120mm blue LED fan and an I/O shield. 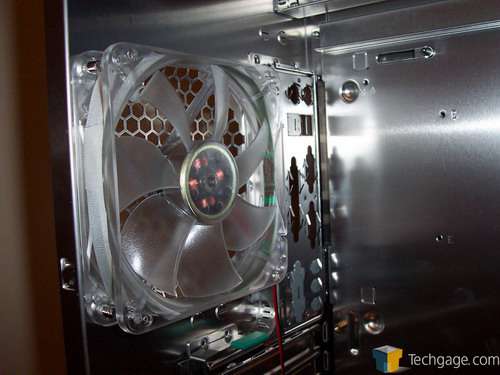 As stated earlier, the Eureka uses a tool less back to secure the PCI slots. This removes the hassle of securing each card with a screw. This is something that I can personally live without but it is a feature that many people will find handy. 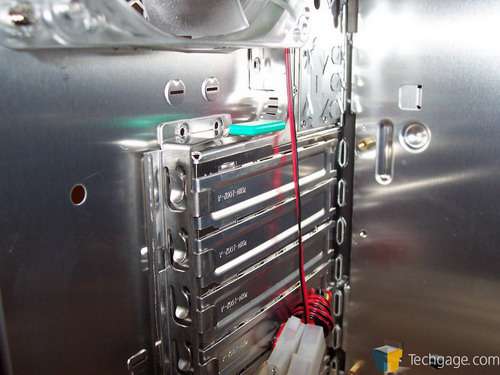 The most notable feature of the case, aside from being made entirely out of aluminum, is the removable motherboard tray. The ability to completely remove the motherboard tray significantly speeds up the installation process and is just a convenience feature that every case should have incorporated into itâ€™s design. 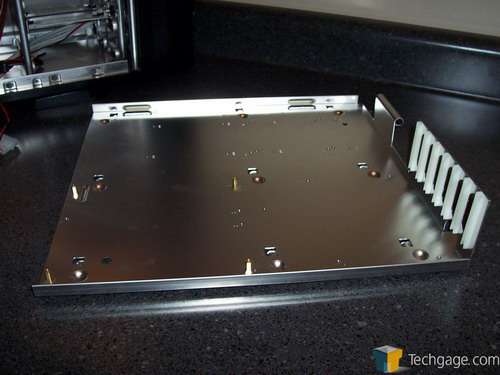 Once the standoffs are installed in the correct ATX holes, the motherboard is installed. In our case, the DFI ICFX3200 is used as a test board. 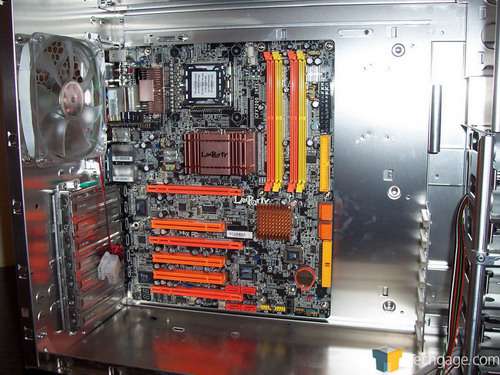 The only other true server tower that we have reviewed recently has been the Cooler Master iTower 930. We are happy to say that installing hardware into the Eureka was a much easier experience thanks to the extra large interior and the removable motherboard tray. The front and rear 120mm fans provided sufficient airflow although with the front door closed, there is little open space for the front fan to draw in air at.

The side panel felt flimsy, as did the handle on the side panel. Being made of the same aluminum, only shinier, the motherboard tray felt rather flimsy too. This is the unfortunate trade off when trying to make a very light case. The LED fan is a nice touch and the hard drive mounting mechanism is top notch and one that I would like to see used in more cases.

One very unique feature of the case is Thermaltake’s choice of hiding the drive rails inside the bay covers. This is a nice way to keep them out of sight, only to be seen when they are to be used in taking the place of the bay cover itself.

With nothing installed in the case, the Eureka is incredibly front heavy but the weight is somewhat leveled out when the addition of hardware. I do not personally like the extra length that the door adds but the perforated look does give the Eureka a very unique and classy look and the side mounted USB, FireWire and audio jacks are a nice addition as well.

While not a favorite of ours, the Thermaltake Eureka is a home server case that we would recommend to anyone in the market for a very light case with plenty of room for expandability. The Eureka earns a 7 out of 10.