Taking a break from making stellar gaming chassis, Cooler Master looks to invade our desks, not to house our multiple GPU systems, but rather our ever increasing storage needs with their iTower 930.

Over the last few weeks, we have taken a few looks at products normally found in servers and enterprise environments. These would of course be our recent reviews of the Thecus Y.E.S. box and the High Point RocketRAID 2310 controller card. While both are more commonly found in server environments, they are priced right and are well suited for the home users and small businesses alike.

What if, however, you donâ€™t necessarily need an external device to back up your information on? What if you could add the convenience of hot swappable drive bays so commonly found in business servers? As more and more users are abandoning their now dated parallel ATA drives in favor of SATA drives, it would be nice to actually be able to use one of SATAâ€™s primary selling points, the ability to remove a non-critical drive (one that houses the systemâ€™s operation system) and install another one in its place.

Keeping with the home server theme, we are taking a long look at Cooler Masterâ€™s iTower series 930 ATX case. With its four front facing hot swappable drives, the 930 isnâ€™t exactly being marketed towards the extreme gamers like many of their other cases have been in the past, but rather, to those who have a lot of media and apparently have that media on scattered among many separate drives.

Regardless how one uses it, the fact that the iTower 930 enables the end users to easily hot swap drives in and out, directly out of the box is certainly a plus. This opens the case up for many possibilities, most of which being server related. Assuming your motherboard supports SATA RAID, or you have a separate add in RAID controller card, you suddenly have a case that allows you to pull out a failed drive and install a new one, and by doing so, allowing the RAID array to rebuild itself, thus eliminating annoying down time.

Uses for the hot swap bays aside, throughout this review we will be looking at the case as just that, a case. And while we certainly have ideas for different uses for the iTower, we will be judging it on what it fundamentally offers to the end users and how easy it is to work with.

The iTower is packaged in typical Cooler Master fashion. Multiple pictures of the case itself can be had, as well as information you need. One thing to notice, and this is thankfully becoming more and more common, is the RoHS logo on the front of the box. Itâ€™s good to see companies finally jumping on the environmental bandwagon. 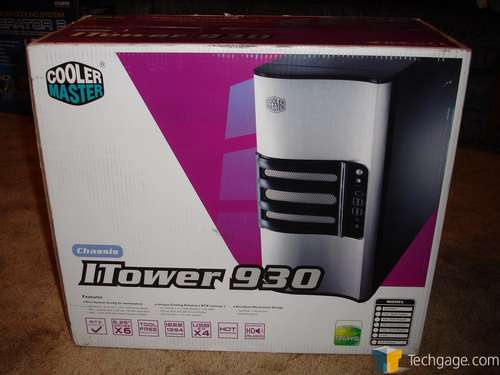 On the back of the box, there are multiple pictures of the exterior and interior of the case, as well as information in six different languages. 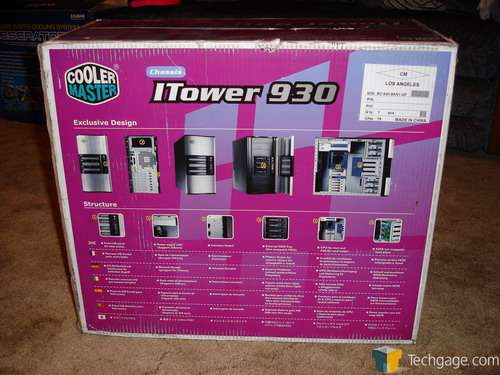 Once opened, it should be pointed out that Cooler Master ships their cases in sturdy Styrofoam in an attempt to protect them from errant delivery handlers. 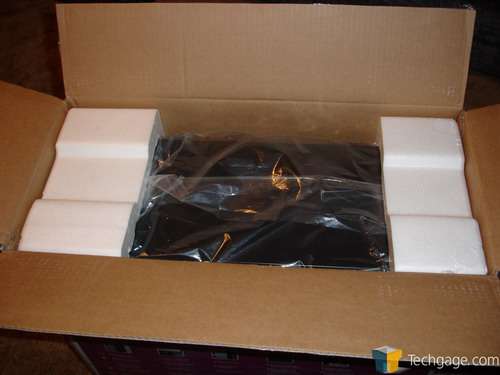 The front of the 930 should be easily recognized as a Cooler Master chassis. Using their popular wave look, Cooler Master has produced an elegant and relatively simple looking case with its only stand out feature being the black center door that hides the four bay hot swap drives. To the right of this door is the generous I/O panel that includes 4 USB ports, a lone firewire port as well as the obligatory headphone and microphone jacks. 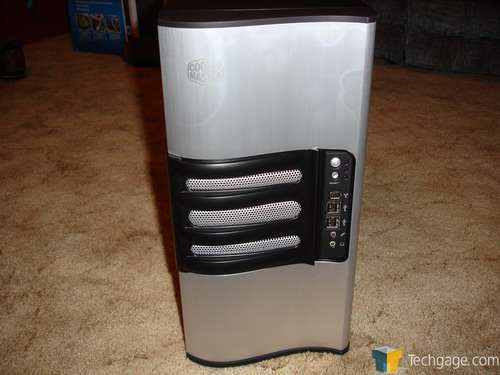 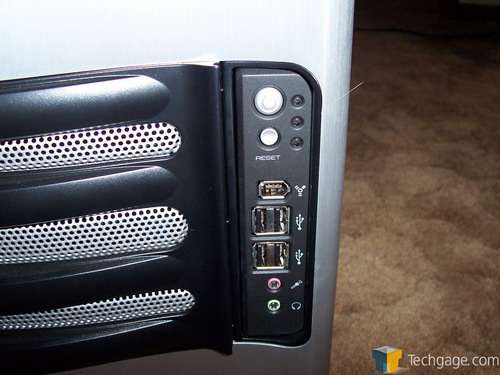 Moving around to the back of the 930, we find a 120mm exhaust fan, the open space for your I/O shield and the opening for the PSU. Notice the large thumb screw just under the space where your PSU will be housed. This is to be removed, allowing the back panel to be removed as well. This is necessary when installing your power supply.

Due to the rather close quarters inside the case, the PSU will have to be installed from the back of the case. While this is somewhat of a cumbersome method, there isnâ€™t any other way around it and ultimately, isnâ€™t that difficult of an operation. Also on the back, just to the right of the PSU space, there is a small round metal tab that sticks through the back edge of the side panel. There is a hole in this tab that allows a lock to be placed on the case, further protecting your system internals from the occasional wondering hand. 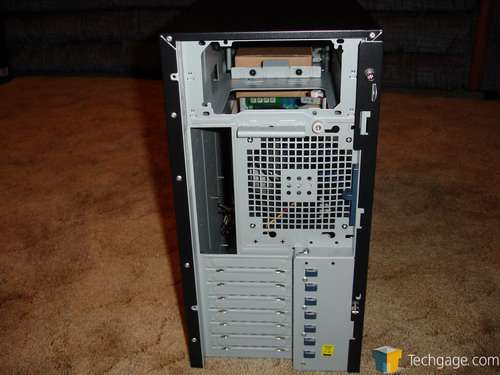 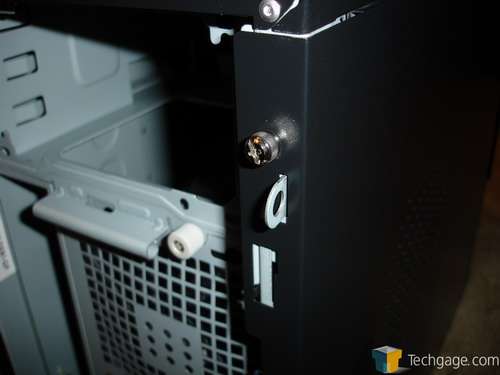 Another little extra that the 930 provides is a small lock at the back of the case. This, when pressed down, will lock the door in place, not allowing the side panel to be removed once the two thumb screws are removed. While not anything special, it does function well in keeping the side panel in place should the thumb screws be absent. 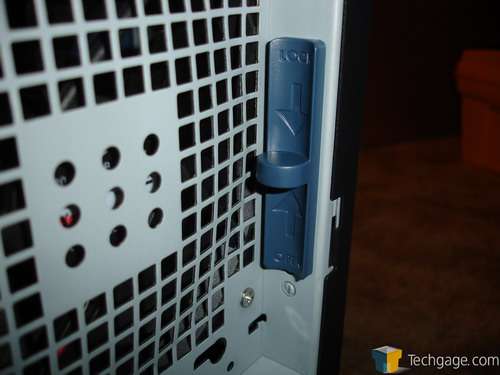 Moving along to the side of the case, the side panel lacks the usual flair or recent PC chassis that we have looked at here at Techgage. Clearly the iTower is not geared towards the gaming community at large. This isnâ€™t to say that gamers canâ€™t find functionality in its design, but itâ€™s not exactly something that will draw much attention at your next LAN party. Sometimes however, that isnâ€™t such a bad thing after all.

Getting back to our focus, there is a rather large section of perforation near the back of the side, allowing cool air to be pulled into the case and across the video card and motherboard. 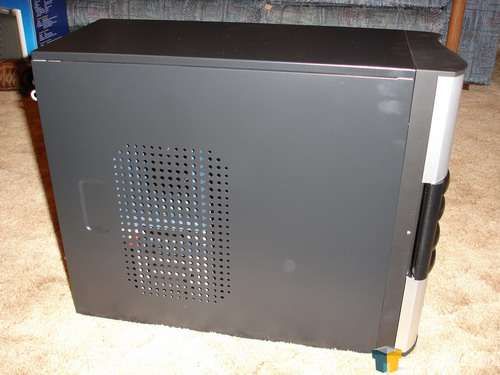 To aid in keeping the case in place, as well as dampen vibrations, the iTower has four rubber feet on the bottom. 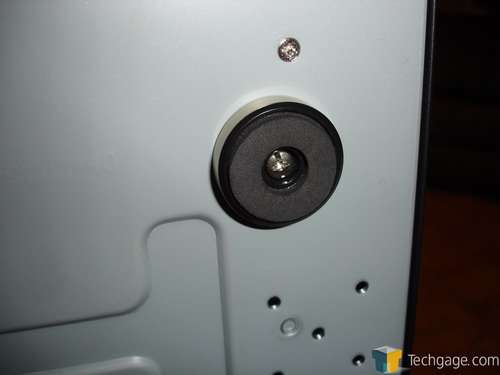 You know what the outside looks like. Let’s take a look inside now!