For this review, Iâ€™m using my friend Zachâ€™s machine again, which you may remember from my earlier review of the Antec SOLO case. Itâ€™s not the most blisteringly high-end machine, though it does have significant potential for heat generation with its AMD dual-core processor operating at 2.2GHz, and a hot ATI X1800XT graphics processor.

ATITool was used to stress the CPU, Northbridge, and GPU, and the same test with default settings was run for each configuration tested. For each temperature measurement, the motherboardâ€™s onboard data acquisition system and internal thermistors were used. Through all testing, Cool nâ€™ Quiet features of the motherboard were enabled, as they will likely be in actual use. ASUS Q-fan was disabled, so that the CPU cooler would always run at the fanâ€™s full speed. Under load, temperatures were allowed to stabilize for 10 minutes during each test. The three-speed case fan was set to HIGH speed during thermal testing.

Fairly impressive as well was the drop in system noise after installing the TMG coolers. The most significant noise reduction was with the change from the stock ATI cooler to the Thermaltake TMG AT2. The AT2â€™s blower generated a soft whoosh of airflow, and a barely-detectable whine produced by the blower wheel itself. Any noise contributed to the AT2â€™s noise signature by its blower motor, however, was inaudible. Personally, Iâ€™d prefer to use the AT2 with a variable-speed or automatic fan controller, or splice its leads into the old connector on the video card itself, in order to use its onboard thermal control function for complete silence when idling. 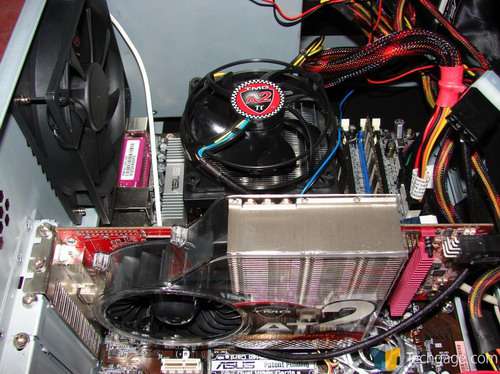 The A2 cooler on the processor sounded much like any case fan while running at full speed, though with ASUS Q-Fan enabled, and the fan spinning at about 1500 RPM, it was virtually inaudible as well. Iâ€™m a stickler for noise, and Iâ€™m known among my enthusiast friends to have an almost obsessive aversion to computer noise. However, I could certainly live with the noise level produced by the A2 cooler, when used with the motherboardâ€™s automatic fan control function.

One concerning thing I noticed upon firing up the A2 cooler for the first time was a very high-pitched metal-on-metal whine. This went away after about five minutes of operation, however. Iâ€™m not sure what this means, or whether you should be concerned by this. If the whine doesnâ€™t go away, itâ€™s an almost sure sign of absence of lubrication in the motor. Also, Thermaltake claims that the A2â€™s fan is spring-mounted, much like the similar Arctic Cooling products (whose fans mount on compliant rubber studs), but Thermaltakeâ€™s spring-loading method doesnâ€™t provide any true isolation, since the fans are still retained by plastic studs. It would have cost Thermaltake less to simply attach the fan with the plastic studs alone. 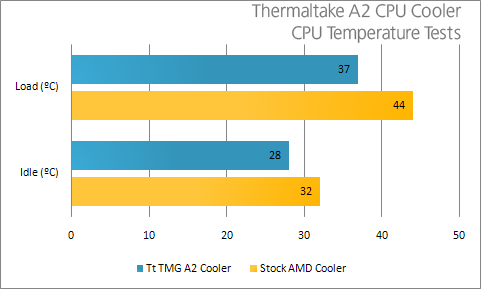 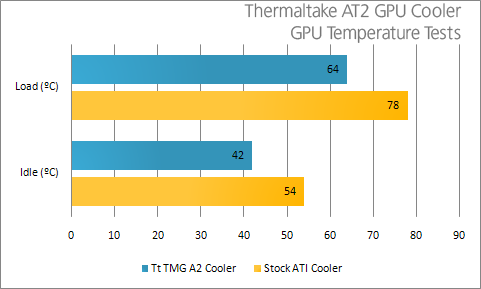