With this particular cooler, there is no way to latch or connect it to your laptop. It’s only a matter of setting your laptop straight on top of the cooler, then plugging it in. As long as your notebook still has sturdy rubber feet in place, you should run into no problems with this. The cooler also has rubber feet on the bottom, but they are primarily there so that the cooler doesn’t scratch your desk. They have no real grabbing power, so you can slide it around quite easily.

One thing that I did immediately like, even before turning it on, was the increased height that it gave the laptop. I found it more comfortable to type and navigate on, but this will certainly vary on your sitting position and how high your desk/table is. It definitely worked out to my favor though.

In order to test the effectiveness of the cooler, I concurrently ran both HD Tach’s Full Bench along with Super PI’s Blend torture test. I first ran these tests before the cooler was installed and then straight afterwards. The testing environment temperature was the same between both tests, as they were done 30 minutes apart. The tests were run for 15 minutes, which was sufficient time to really heat things up. Since Motherboard Monitor could not track any of the temperatures, I used i8kfan to keep track of them. This is not the most accurate program out there, since it’s designed for a different model Inspiron, but it proves accurate for the most part.

After the first test without the cooler, the CPU load temp sat at 63°C while the HDD was 57°C.. both very high. I’m lucky it was actually a cool evening here, because in the summer I’ve seen the CPU reach 73°C. The idle temps (30 minutes) without the cooler were 33°C for the CPU and 39°C for the HDD. 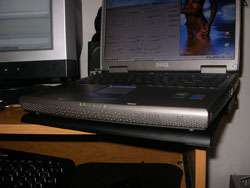 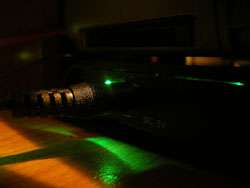 With the cooler in action, I ran the same tests once again. The idle CPU temperature stayed at 33°C, but the HDD shaved off 2°C to sit at 37°C. This could be primarily because the cooler lifts the notebook off the desk enough to allow better airflow. After the Super Pi and HD Tach stress tests were run, the cooler managed to take another 2°C off the CPU load to hit 61°C. Not such a huge difference there, but I suppose any loss is a good loss.

Where the cool did make a pretty sufficient difference though was with the hard drive temperature. We went from 57°C down to 48°C! That’s quite a healthy difference, especially since a lot of the temp that you feel more than likely comes from your hard drive and not the CPU.

So the question that this review really boils down to: Is this worth buying? I am unsure of the retail price, because I have not been able to find it at any online e-tailer. I am waiting for Titan to get back to me, and I will include a link to where it can be purchased. At any rate though, this is meant to be a value cooler, so I am sure that it will not be more than $25US max. At that price, I would recommend it, but not if you expect unbelievable cooling power.

The cooler looks great and does work, and works well even though it’s extremely quiet. If the cooler had built in USB ports, this would certainly be a win win situation, and your purchase decision should likely be based on that fact. If you don’t need more than one USB port, (unless your notebook actually has more than two), then you will not have a problem. I just hate having to remove my mouse or the cooler from the port in order to get pictures of my digital camera for instance.

Overall, this is a great product from a super crew over at Titan. I definitely look forward to see what they come up with next, because as we seen from the Robela, they are certainly innovators.