Glued to your current wireless setup but want to make the leap to 802.11n? With the TEW-637AP, it’s very possible. By adding this to your existing network, you open up all of the “n” benefits, while retaining all of the settings on your current router. Is 802.11n worthy of such a unique upgrade?


To test out the 637AP all that we did was simply install it and set it up. After the TRENDnet easy-N-upgrader was setup, we used it for a week as the only wireless access point in the building. Having shut off the wireless radio in the TEW-633GR, the only wireless signal running through the building was the b/g/n signal and having said that, the range of the 637AP was absolutely impressive. Speeds of the AP were on par with the TEW-631BRP that we evaluated a few weeks ago.

Given the 637AP’s small size, being able to both expand and upgrade a home user’s current wireless network is a great advantage over buying an entirely new router and setting it up the way you want. That said, the entire idea of getting the 637AP to upgrade to an N network is a bit silly for a large majority of users. The reason being is that for the price of this AP ($50 online) plus a Franklin, you are suddenly in the range of TRENDnet’s own TEW-631BRP and while ugly, you’re getting an entire routing package… hardware and a robust web interface with far more options than most will need.

This put the 637AP in strange territory in the sense that unless you are absolutely in love with your existing wireless network, what’s the point of getting this unit when you can get a full blown router for just a bit more? One other disadvantage of anything wireless N is that you need the corresponding adapters to even be able to use the faster wireless protocol.

Once wireless N becomes a standard (eventually… honest) we will see more and more devices with these adapters built into them, making a wireless N routing upgrade that much more alluring. As it stands now though, there are the hidden costs associated with making the jump to wireless N. I know this isn’t TRENDnet’s fault and I know that it doesn’t only affect them but what it does do is place the 637AP about $10 higher than I personally would like to see it at.

From a functionality stand point, the TEW-637AP absolutely owns. Its ease of setup and installation coupled with its performance and range make the device more than capable to live up to any users wireless demands. As marketed, it does exactly what TRENDnet states it will. It takes an existing network and upgrades it to a wireless N network. 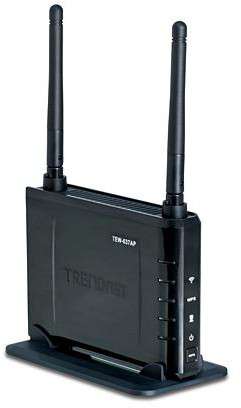 While I appreciate the addition of the gigabit Ethernet port on the back of the 637AP and understand why it’s there, most home routers in use today only use 10/100 port speeds and for those of you scratching your heads that the thought of running a 300 Mbps wireless N connection through a 100 Mbps port, almost nobody will find this to be a bottleneck. That said, I think that the inclusion of a gigabit Ethernet connection on the 637AP was a smart move on TRENDnet’s part.

From an actual application standpoint, I have a few suggestions for TRENDnet. Start marketing the 637AP as an actual access point as well as a network upgrader. This is what the product does but nowhere does it mention it on the packaging. Also, if possible, drop the price a bit. Even a $10 price drop would separate it more from the bargain priced TEW-631BRP.

We loved that router in our tests and given the fact that good wireless N performance can be had for under $70, what’s the point? I can’t see too many people so in love with their home network that they won’t even consider an upgrade. Even though the 637AP performed extremely well and as promised, I personally would shell out a bit more for a complete router rather than pick up the 637AP… then again, that’s just me.

All in all, the TRENDnet TEW-637AP is a very good product that needs to come down in price a bit to be a real viable upgrade option. What I would use this product for is a simple access point. In my home I use wireless N. Having reviewed a fair amount of routers, I appreciate the performance and enjoy the benefits of the protocol. About 200 feet behind our house is a large barn that we have built a room in to keep saddles and anything else we want to protect and keep out of harm’s way.

I placed a desk in there and occasionally have taken my notebook out with me and by placing the 637AP in the far corner of my home, signal strength increased dramatically. Uses like this are what I would recommend the 637AP for. For those looking for a quick upgrade, I would ask you to consider this but those who aren’t really partial to their current setup (most of you out there), I would simply recommend picking up a new router and skipping over this device. It works and works very well but as it’s priced now, I would get the 631BRP on the cheap and use it for wireless N.