Tt eSPORTS, the professional gaming branch of Thermaltake, consists of various peripherals essential for any gamer to maintain an edge over their opponent. Continuing with our review of the product range from a couple of weeks ago, we have in the lab the Tt eSPORTS BLACK gaming mouse.

Gaming mice of any sort are up against a very broad range of competition, since nearly every tech company going has some kind of peripheral arm. Logitech, Razer, Cooler Master, SteelSeries, GIGABYTE, Saitek… the list goes on and on.

The BLACK is one of three mice in the Tt eSPORTS range, being the mid-range offering of the three. The other two include the low-end AZUREUS and the top-end BLACK Element – from a 3 button optical, up to a 9 button 6400 DPI multi-colored offering.

The BLACK comes packaged in that lovely black and red box art again. It is more of a retail styled box, complete with Velcro-sealed front cover to let you see the mouse. Graphics are dotted over the place detailing features, in 15 languages no less. 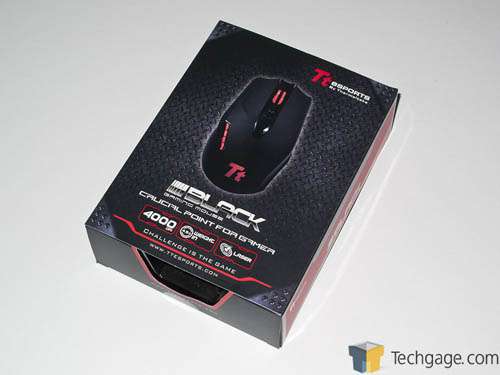 Opening the lid we see the mouse sealed away and some more information on the inside of the front panel. 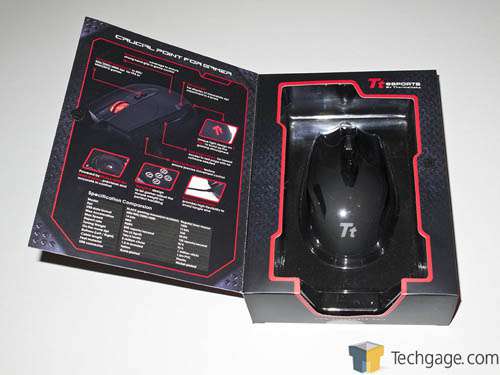 As is common with the eSPORTS range, a small padded bag is provided for you to carry the mouse to LAN parties and the like – in addition to the manual and warranty information guide. 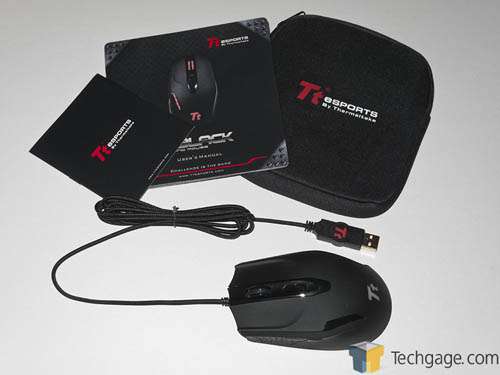 Design wise; on the face of it, looks to be a slightly modified ambidextrous grip. It’s quite long and deep, so it’s certain to elevate your hand somewhat, though the design is not of the usual tapered nature. A mouse for larger hands it seems. 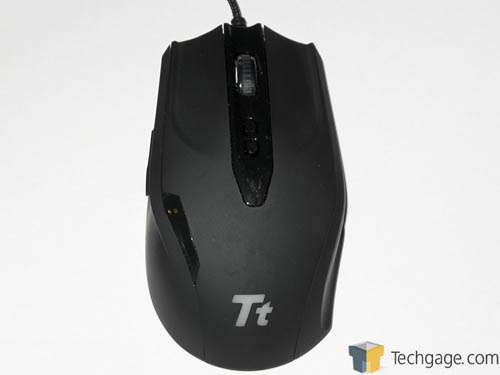 However, the left side has a textured surface and a side button, leaving the right side bare. This essentially leaves us with a right-handed mouse. 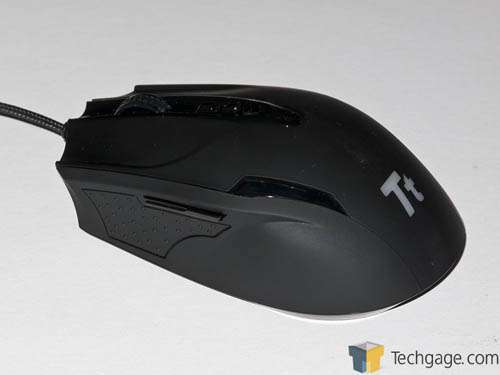 The use of a single thumb button is a strange choice, as most would expect the usual two – back and forward control – or at least two for easy access in games.

The whole mouse has a rubberized coating for grip, a popular choice these days, though a little thin on the BLACK.

On the underside, that all-too-familiar gold, the tell-tale sign of the Phillips sensor. This does mean that the evil pick and place diagonal drift is back. Another strange design choice would be the inclusion of a Teflon disc under the sensor. As detailed in the R.A.T. 7 review, this can cause a rather serious issue with dust collection. 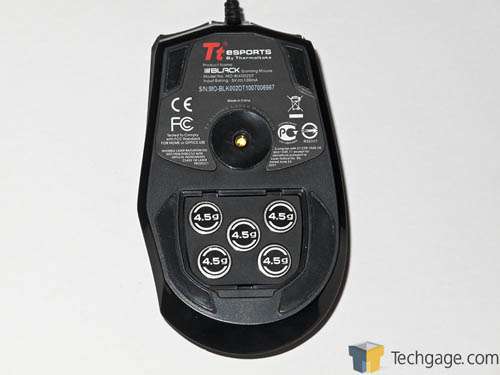 What aggravates it with the Tt BLACK, is that the outer rim of the disc is not beveled. This meant that there was noticeable scratching on the underside as it scraped over the mouse mat. It wasn’t at all aggressive, but after a while, it could wear down a mat. My only advice would be to remove the ring, both to prevent scratching and to stop dust gathering.

The BLACK is not a heavy mouse in the slightest, even with the included weights. There are five 4.5 gram weights tucked away on the underside, hidden away by what looks like a battery compartment for a similar mouse design (just not this mouse). These weights are supported by a piece of molded rubber, so they are not likely to rattle around. 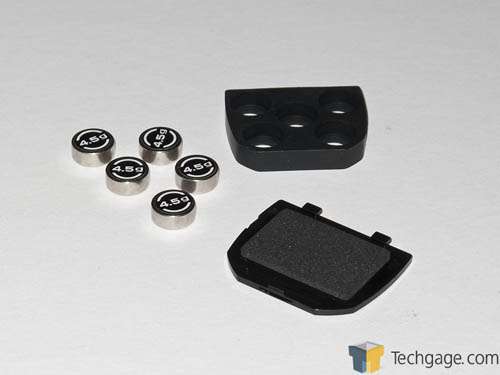 The placements of the weights makes the mouse back heavy, rather than as a central mass, resulting in the back end dragging along the mat when picking and placing. Without the weights, there’s hardly anything to it and it becomes extremely light. Speaking of lights… 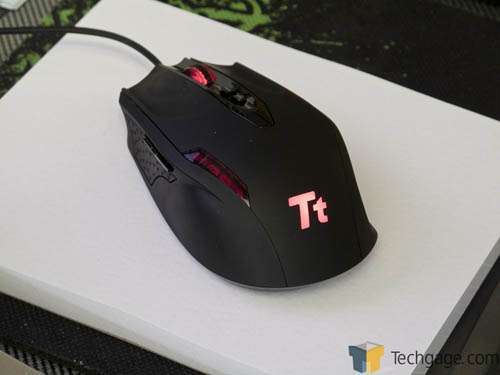 What gaming mouse can be complete without a set of lights to back it up? The Tt logo on the palm rest and the scroll wheel both light up by the power of red LEDs. These are not the super bright variety and are not likely to blind you in the middle of the night.

These lights can be controlled via the software, covered on the following page. The Tt logo pulsates slowly, on and off, over 5 seconds. The only problem with this is that you can not force it to be just ‘on’, only pulse or off. While the pulse is slow and not distracting, it is a bit annoying that it cannot be forced on all the time. The scroll wheel does not pulse, but can be controlled on and off via software.

There are also 4 LED indicators on the side to show the current DPI level.

The pulsing light, Philips sensor and light-weight design all seem to remind me of the original Razer Lachesis, a mouse not reviewed here at Techgage, but one I personally own. The shape is different, but the overall feature list is very similar, minus a couple differences.