When Thermaltake showed us around its Tt eSPORTS line-up at Computex, I got to test out the configuration software for a little bit, and I have to say, I’m surprised by how little has changed. The major version number jumped from 1 to 2 since then, but overall, the software looks almost identical, and has the same level of functionality.

The Challenger Pro allows up to 40 macro combinations to be used, and being that there are 10 macro keys, it means you will have to use the macro profile change key at the top of the keyboard to switch between them.

On the main screen of the application, you’ll be able to adjust all four profiles independently, and back up all of the settings to your computer if you want to. That would be useful if you wanted to use more than 40 macro keys, because it would allow you to switch between these saved profiles on the fly. Additionally, you could create a profile file for each game you play, and load the respective one before jumping into your game. 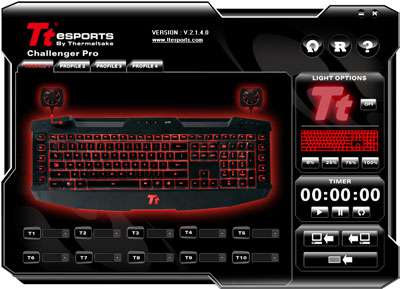 If you don’t want either the keys or the Tt logo lit up, you can control that here, along with the brightness level of the keys. You can control the latter on the keyboard itself, but this piece of software is required to turn off the Tt logo. Catering to addicted gamers, there’s also a “Timer” here, allowing you to record how long you’ve been in a game.

To create a macro, you need to click on the drop-down menu next to any one of the “T” keys. Here, you can also choose some simple pre-defined actions in lieu of creating an actual macro. 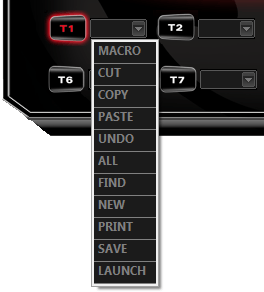 Once the macro setup pop-up is visible, creating a macro couldn’t be much simpler. You need to hit the record button, then type or click away. For fine-tuning, you could adjust the time delay for each action after the fact if you want, which in some cases might be necessary depending on the game and the macro. 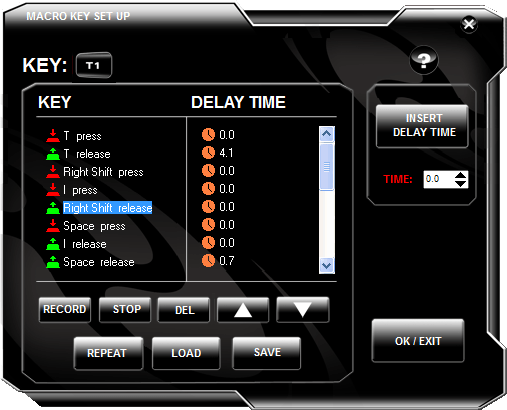 To choose which execution style the macro will have, you can click on “Repeat” and choose between “One-Time”, “Repeat when press and hold.” and “Repeat until next key is pressed.”

One immediate downside I discovered about creating macros on this keyboard is that thanks to the limited amount of on-board memory, the raw number of actions you can have assigned to each T key is small, 20 in all. That might seem sufficient, but consider that a single key press is two actions.

I’m not sure of the reason for this, and I’m also not sure if that’s something that could be remedied, but I’m hoping so. This IS a gaming keyboard, after all, designed for “professional” gamers, so to see such limiting macros is a bit strange.