With the summer heat right around the corner, you need to figure out a good way to keep your CPU cool. Has Ultra come to the rescue with their ChillTEC cooler? As the name suggests, it uses a Thermo-electric Chip to help moderate the temperature of your CPU. The big question is though: Is this Totally-Enormous-Cooler worth your $130?


As we mentioned earlier, we are cooling an Intel E6600. Being used on the DFI ICFX3200 motherboard as our test bed, the results will be compared to the stock Intel cooler as well as the previously mentioned Zalman 9700. The entire bench includes:

This hardware will be used on all three coolers and it will be interesting to see how well the Ultra ChillTEC compares to one of the best air coolers available on the market today. Keep in mind though that the Ultra uses a TEC while the others simply push air across some fins.

First up, the idle temperatures at the stock 2.4 GHz are recorded with the PC sitting unused. The PC is powered on and left for an hour. After that hour, we recorded the temperature using IDE Smart Guardian. After the allowed hour, we got the following results. To get the load temperatures, we ran 2 instances of CPU Burn-In as well as a pair of Prime 95 sessions. After an hour, the temperatures were recorded. 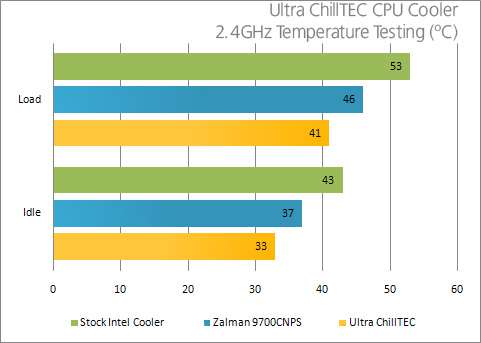 We repeated the process but this time, the CPU was overclocked to 3.2 GHz and had 1.4v running though both cores. The same process was used to find the idle and load temperatures. 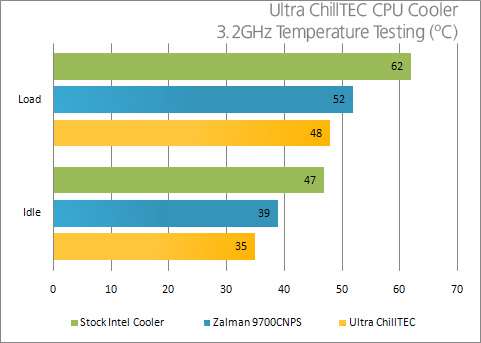 As you can see, the temperatures scale nicely on each cooler and as it should, the ChillTEC comes out on top each time.

One might ask why we did not use the CoolIT coolers that we have used in the past. With the Ultra working like it does, we didnâ€™t feel that it would be a fair comparison. What the Ultra does is crank up the power to the TEC when the temps start to jump. When they are at an acceptable level, the cooler works as any other, without the help of the TEC. This is something that we would like to see Ultra allow the end user to control more in the future.

When the testing was done, there were a few things that we liked about the ChillTEC but many more that we disliked. First off, the control module was just about worthless. It looks decent in a black case but thatâ€™s just about where it ends. The temperature readout never worked once, unless I am to believe that the CPU never got above 26 degrees. Then we move onto the man digging.

I canâ€™t imagine what was going through the minds of the engineers that originally produced this but I donâ€™t think it was a productive meeting. I understand that the guy digs faster the harder the cooler is working but what a silly thing to show. That and he never once started to dig any faster considering the temperature reading never budged from 26 degrees.

From there, the fan speed kept going up and down in a predictive fashion. Every few seconds, the fan would spin faster and then would spin back down. Even with headphones on, this was annoying.

At the end of the day, the Ultra ChillTEC is an OEM product from a manufacturer one can only assume is in China. The cooler is exactly the same as the Vigor TEC cooler, but with an Ultra badging. This is really a non issue but it is something that with a little effort from the engineers at Ultra, can be truly Ultraâ€™s own. They could redesign the control module to allow the user the ability to control the power going to the TEC. This would add quite a bit of bite to a solidly designed product that Ultra already has.

With all that said, the Ultra ChillTEC earns a 7 our of 10.