Keeping data backed up or synchronized in Windows isn’t always the most self-explanatory of processes, and it’s because the OS doesn’t make it easy to do either of them. Fortunately, there’s a solution that happens to be free, feature-rich and most importantly, reliable. It’s called SyncBack, and deserves to be in your virtual toolbox.

For as long as I’ve been using Windows, which for the record has been since 3.x, I’ve been left oblivious about the best process for synchronizing data under the OS. Now, syncing data seems like a truly simple thing, but for whatever reason, Windows doesn’t make any option immediately clear. At the same time, it’s difficult to find any third-party solution that can sync reliably… and especially one that happens to be free.

Being a full-time Linux user, I’ve heavily relied on “rsync” over the years, a CLI tool. I’d call it “simple”, and for the most part it is, but because it allows some extremely fine-tuned synchronizing, the program can be as simple or as difficult as you need it to be. To show off many of the things rsync is capable of, I even wrote an article based on it three years ago.

There may be a command-line application built into Windows for syncing, but if so, I haven’t found it. Being that I’ve been in Windows a bit more lately due to, ahem, a gaming addiction, I decided to set out and find a reliable, free syncing program for Windows.

After perusing many different software websites, I ended up ultimately discovering “SyncBack”. 2BrightSparks, the program’s developer, offers commercial versions of the application for those who need them, but for more basic use, it also gives people the opportunity to download a completely free version, void of any sort of bloatware or nag screens.

Being that I was testing the free version, I had expected to see a lot of semi-important features missing, but that’s not the case at all. Unless you have specific syncing needs, chances are that the free version of SyncBack is going to do the trick for you. Kudos to 2BrightSparks for availing people a free solution!

When the program is launched for the first time, it should ask you if you want to create a profile right away, and for all intents and purposes, that’s going to be the easiest way to kick things off. But even if not, all that it takes to create a new profile is to click the “New” button in the bottom-left corner. 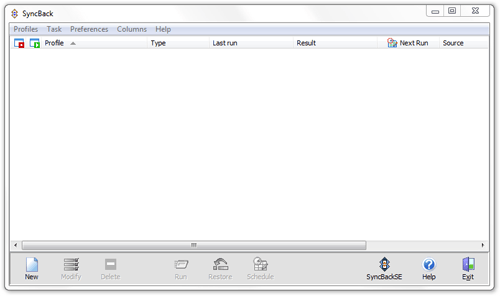 “Backup” and “Synchronisation” might sound like similar processes, but there’s quite a large difference. To backup means that your files are simply copied over to a backup location, without concern of whether or not a file exists on the target that’s no longer available on the source. Synchronisation is different in that it allows you to keep data in two folders completely identical.

If your goal is to simply backup data from one folder into another, that option is going to be suitable. But if you want to make sure that the data is 1:1 (including permissions and usergroups) with both the source and target folders, then synchronisation is what you want.

Once selected, you can name your profile, and I recommend you name it in a rather specific manner if you are going to have more than one profile. For my testing, the main sync scenario I experimented with was keeping a folder on my NAS box synced with my music folder on my local machine, and so I named it “NAS Box Music Folder”.

Being that SyncBack up to this point looks like a very simple application, the next screen might look complicated, but it’s not, trust me. It will require some reading though, because where data backup/sync is concerned, it is possible to make a mistake that you’ll regret.

For most people, you won’t have to leave this main screen, since the six listed profiles are bound to prove suitable for a lot of people. There are additional tabs, though, including “Advanced”, “Copy/Delete”, “Filter” and “Sub-directories” which allow fine-tuning of any of these profiles. Or if you are a power user, you can simply click on “Custom” and create your own. 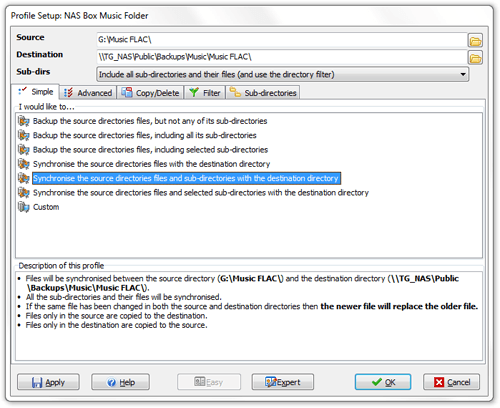 I am not going to exhaust all of the options here, because there are far too many scenarios to tackle. But I highly recommend that you look through them to make sure that your profile is perfect, because once it is, you’ll appreciate the fact that you took the time to do so.

Because I was merely looking to sync up my music folder with one on the NAS box, I chose the fifth profile in the list, for “Synchronize the source directories files and sub-directories with the destination directory”. There is just one additional thing I had to modify, which was, if a file no longer exists on the source, I don’t want it to keep it on the target. 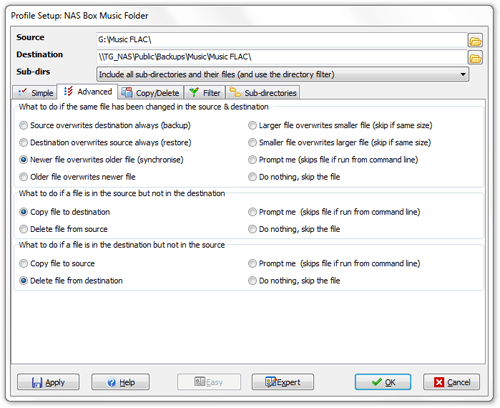 That’s an important distinction to make, because by default, no sync process will assume that you want to delete anything, and if they did, and that wasn’t your intention, then clearly there’d be a foul mood on its way. I wasn’t looking for that though, but rather wanted to folders to be 1:1 with each other, so for that, I went into the “Advanced” tab, and under “What to do if a file is in the destination but not in the source”, I made sure “Delete file from destination” was selected.

If you think that there are no files you want to retain, but don’t want to take a chance, you can also choose the option to prompt you if a file is to be deleted. That means you’d have to be at the PC, however. The better option would be to simply give the “OK” to your profile and then run a simulation, which the program prompts you to do before running the real thing. Once you do, you will see a screen like this: 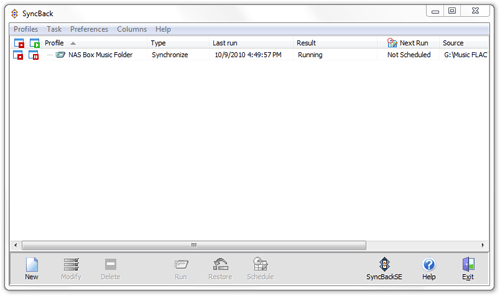 If you have a lot of files/folders, this list might be split into more than one page. If so, it can be a bit tedious to go through each one, and that’s one thing I wish was a little bit different. I’d like to at least see an option where the results are listed on just a single page, which would make it easier to look through for those with faster PCs.

In this list, it’s important to look at the “Differences Summary” pane, which tells you the current status of the given file. As you can see, I had some files not in the destination, and then some not in the source. If files exist in both places, but the file sizes are different, then by default the program will overwrite the target. 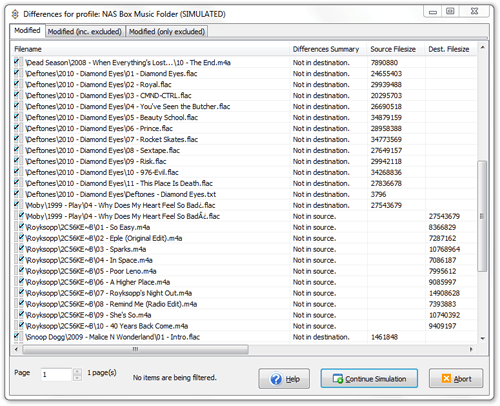 One thing I like about syncing is that it helps me spot out problematic files, and in the case of my music folder, I had a couple of them. In the image above, for example, you can see that the song, “Why Does My Heart Feel So Bad?”, on Moby’s “Play” album, has a bad character in it. Because of this, even though the file was on my PC, it couldn’t be copied to the NAS – at least, not without screwing up whatever special character was at fault. In the end, I had the same song on both the source and target, but with different filenames.

This is mostly an NTFS limitation, and because of it, it’s important to make sure that none of your file or folder names have any non-standard special characters (/ : ” ?, etc). If you rip music and grab the album information via some database, you can sometimes see resulting filenames like this, and if so, it’s imperative to fix it once it’s noticed to prevent issues down the road, such as this one.

A second problem I had is almost identical to the first one (I have no idea how I run into these). One of my Röyksopp albums, “Melody A.M.”, somehow had a corrupted folder name, and for that reason, I could never access it in Windows. I could access it fine in Linux, but for some reason, Windows saw it as “not being found”. This is an issue even chkdsk wouldn’t fix, so my solution was to simply go back to Linux and rename it there.

If you run into a situation where filenames are corrupt like this, the best idea is to abort the simulation and then go fix the files manually, and then run the simulation again. While fixing the files, you can keep this simulation box open, but it’s important to not run a sync without running a fresh simulation, since the program might not have caught the changes you made in the meantime.

When all is well, you can click “Continue Simulation”, which will likely bring you back right to the main screen, at which point you can right-click the profile and run it. Similar to a simulated run, you’re going to get a popup that will show you the changes, but this time, you can actually execute the process. 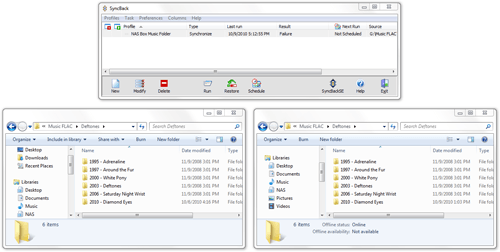 As you can see above, one folder that was pointed out to me as not being on the target, but on the source, was an album by the Deftones. Once done, the folder was indeed on both the target and the source. You might also notice a “Failure” result in the application itself, and that again comes back to the previously mentioned corrupt filenames. If there is indeed a failure, the program will load up an HTML page that shows you the results, like this: 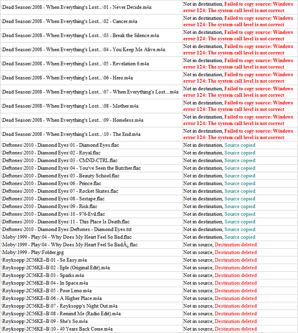 The errors in red are the files that couldn’t be transferred, and as mentioned earlier, it’d be wise to go fix the files on your local drive and then run the sync process again. The only reason these errors came up for me, is that up to this point I hadn’t corrected the file names, since it required me to boot into another OS – something that at the time wasn’t convenient.

Once the process is finished, it doesn’t mean that the fun is over. If you want to make sure that a folder is continually kept in sync with another, you can easily set up a schedule right through the application. After configuring it to your liking, SyncBack will produce a task in the Windows Task Scheduler that will run at regular intervals… making sure that you won’t have to worry about manually syncing a folder ever again. 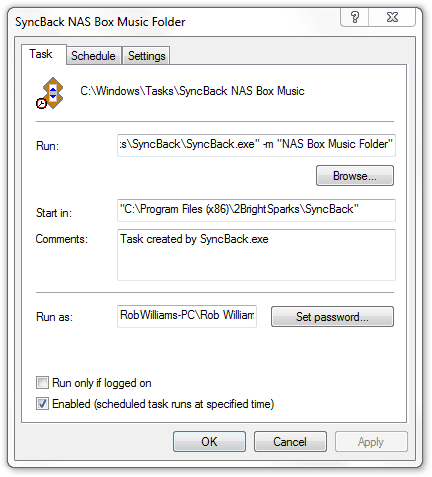 Hopefully by now you are inspired to download SyncBack and keep your data backed up, given that the program is free, and also pretty simple to use. I have made the mistake of having poor backups in the past, and I couldn’t have regretted it more. Don’t make the same mistake, and keep your data safe! There are no excuses!