The past few years have been good to external storage. It’s gone from being uncommon to being a complete fixture in our daily computing lives. Four years ago, flash-based thumb drives were put on an altar in the same way that a Ferrari might have been. They were rare to see, and oh so expensive. Not so much anymore though. You can carry around 4GB in your pocket for less than $50, whereas 4GB two or three years ago was unheard of.

Thumb drives are not the only popular type of external storage though. In fact, it’s one of the absolute few. You can either carry around a 4GB thumb drive or a 4.5GB DVD, or now, a 25GB next-gen disc. Of course, discs are not that easy to carry around and look completely odd when thrown in your pants pocket. So what about those who want even more storage, but are looking to retain a small form-factor?

That’s where Vantec and 2.5″ hard-drives come into play. We first took a look at Vantec’s own NexStar 3 2.5″ enclosure last November and since then, I haven’t stopped using it. In fact, the same Toshiba 200GB drive hasn’t left it. Currently I use it to back up my primary Linux system with the help of a bash script, which works quite well. There are three reasons why I love the product overall. I can carry around 200GB in an enclosure that’s thinner than my wallet, although slightly longer. It also looks great, and lastly, it performs well. Copying to the enclosure happens at a minimum of 20MB/s, so performance is hardly slow.

Today we are taking a look at two new Vantec products, the EZ Swap EX and NexStar SX. The NexStar SX is primarily a fresh coat of paint on a product we already use, but it’s a mighty-fine coat. The EZ Swap EX is completely different though. Hot-swap bays for computers is nothing new, but hot-swap bays that use 2.5″ are not as common.

When all installed, the EZ Swap EX accepts the included hard-drive enclosure. It’s like inserting a floppy-disc… just a floppy-disc that happens to hold an insane amount of storage. Before we jump into our thoughts though, let’s take a quick look at what you will receive when you decide to purchase the product.

The box is comprised of a black/orange color-scheme and displays all of the information you should need to know. The exact model we are taking a look at is the MRK-250ST, while the MRK-250FD is the model you will need to choose should you have an old-school IDE-based hard drive. 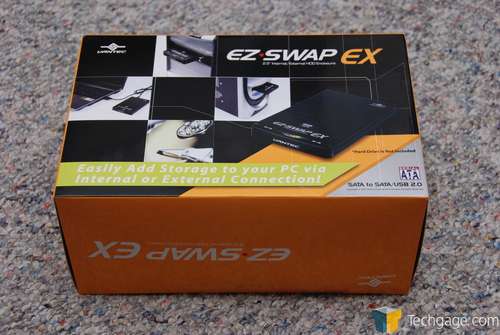 First things first… the plastic mount that slides into your 5.25″ drive bay. It screws in just like any other 5.25″ peripheral. You can then install the actual drive bay within the mount. 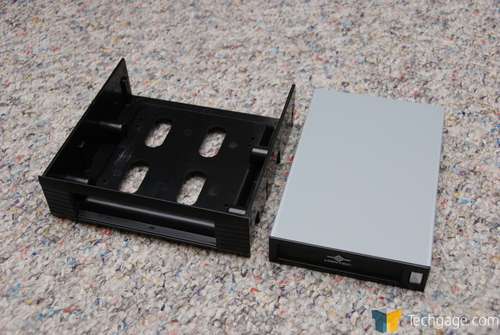 The enclosure itself is quite small, very similar to other 2.5″ NexStar enclosures. It includes only two parts, one of which you connect your hard-drive to, and the other which acts as the chassis and protection. The front of the enclosure lights up with drive-activity. 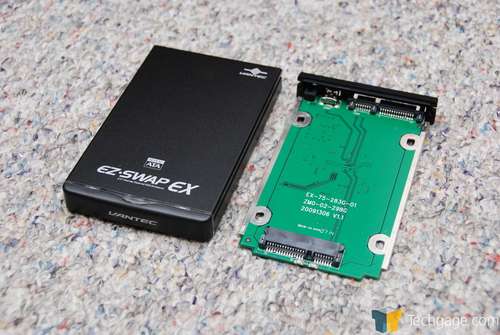 In case it’s not obvious enough, this is how the enclosure slides into the bay. Also is a picture of the entire product installed into our Antec P182 chassis.It blends in quite well, and even though the drive sticks out, the door on the case shuts just fine even with the drive protruding a tad. 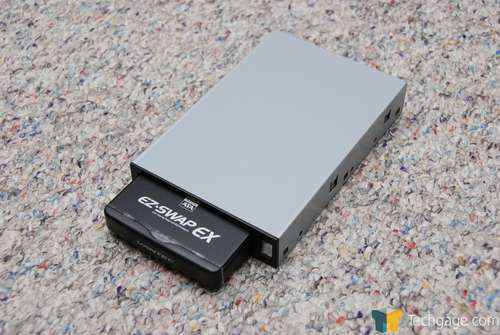 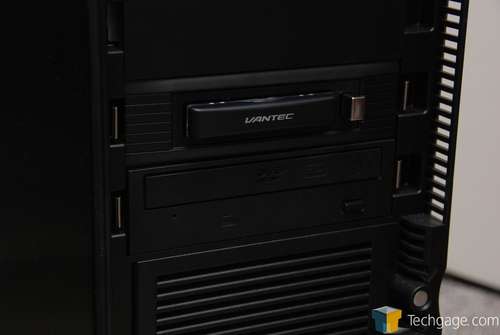 That’s essentially all there is to it. You will need to connect an S-ATA cable from the back of the installed bay to an available S-ATA port on the motherboard and also hook up a floppy-drive 4-pin connector as well. Vantec has included a 4-pin Molex to 4-Pin FD connector adapter in case you don’t have a floppy power connector free.

Let’s jump right into a look at the NexStar SX and also our performance reports.