I admit it… I love this enclosure. It’s by far one of the best looking ones I have ever seen, and looks far better in front of you than in a picture. After first turning the unit on, the large LED on the top lit up purple, and then blue. The LED adds that extra touch to make this look just as classy as Vizo planned it to be.

Performance wise, it’s just what I expected from a USB port. Taking My Pictures folder, which includes 2,393 files to equal 2.60GB, took only 96 seconds to copy to, and 117 seconds to copy from. This effectively made the write speed 27.8MB/s, and read speed 22.2MB/s. Oddly enough, I expected the drive to have a faster read than write, but that’s not how it turned out in this case. So, the speed you will receive from the unit is equivalent to a high end thumb drive, which is what I expect from an external enclosure. 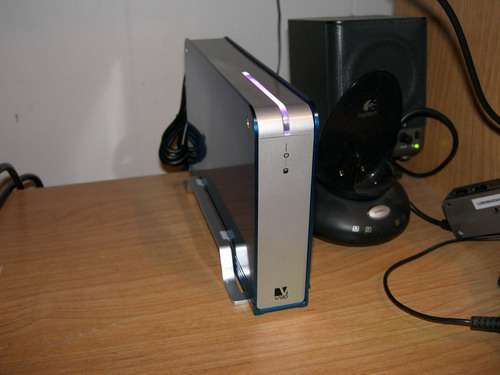 If you are using a S-ATA drive, the Read/Write will be far higher than what I accomplished.. more than likely twice as fast. Because instead of going through a USB port, it will be plugging directly into the motherboard, which means you could technically play games off of it if you wanted to. Once I get a spare S-ATA drive, I will be testing this out.

There are only two single things that I don’t like about the unit. The first thing is the lack of ventilation. It’s a very secure fit for your drive, but there is no real breathing room. If you use your drive constantly for hours on end, it may not fare to well in there. There is a little bit of real estate still available in the back, so a small opening for hot air to come out of would have been appreciated. The second issue is that the drive does not include a Firewire connection. An available Firewire connector would have benefited anyone who doesn’t have an available USB slot, which is very common on laptops. 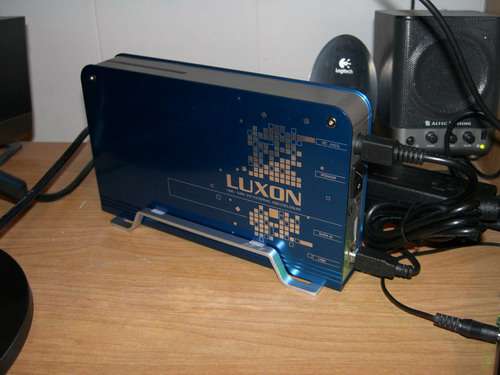 In the end, I am giving the Vizo Luxon an 8 out of 10. With future models, I’d love to see better ventilation and hopefully a firewire connection. The biggest issue you will personally have with the enclosure is finding it for sale. After much searching, I was unable to find it on any e-tailer’s website. As soon as Vizo let’s me know where you can pick one up, I will edit the review to reflect that.

If you wish to discuss this review, you can do so in our related thread. You do not have to register in order to reply to our content threads.