Thanks to the rising popularity of SSDs, it’s become a little challenging writing a review for a mechanical drive. However, while HDD performance pales in comparison to an SSD, it still matters. Kind of – allow me to explain.

If all you’re using a hard drive for is to store data, performance is clearly not a major issue. If you kick-off a movie on either an SSD or a mechanical drive, for example, the performance won’t seem too different. Where things change is if you skip through the file – faster storage has obvious advantages. That leads me to the main point where hard drive performance can matter. If you work with these stored files a lot, such as for your personal projects (video, audio, images, et cetera), a faster drive is undoubtedly appreciated. SSDs might be affordable for a modest drive, but they’re still outside the realm of possibility when you need to store terabytes of data.

To WD’s favor, that’s what will sell its 4TB Black drive. It’s for those who need both high storage and high performance. I’d still be quicker to recommend WD’s own VelociRaptor for a nice blend of both factors, but it carries a price-premium and maxes out at 1TB – it’s not exactly sharing the same target market as this Black drive. 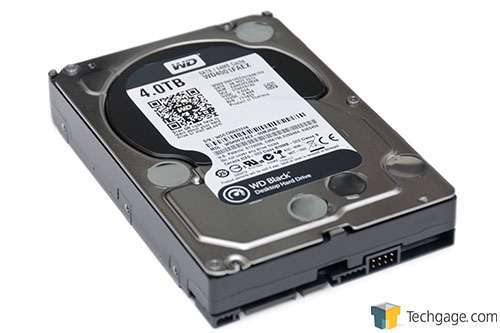 That all said – does WD’s Black 4TB properly fill its role? Yes and no. As far as 4TB storage is concerned, your options are limited, so if you need that kind of storage now, you’re buying either this drive or HGST’s (a WD company). Currently, the HGST drive retails for $310, while this Black retails for $330. While we haven’t tested the HGST drive, based on specs alone I’d expect both drives to perform similarly.

On the topic of latency, I found that to be an odd point about this drive. Given the beefier platter size, you’d almost expect the 4TB drive to be faster than the 2TB model, but not so. In fact, this Black 4TB even managed to get out-performed by WD’s own Green drive (2TB). That seems a bit silly. Transfer-speed wise, while the 4TB model still doesn’t beat out the 2TB one, its performance is close.

With a drive like this, you have to take the good with the bad. Since WD employed 1TB platters in its Red series drives, I had hoped that we’d see that carried over to this Black drive, but it’s clear that WD hasn’t yet optimized those platters for faster speeds. Had WD been able to put those platters in this drive, we would have seen far-improved performance I’m sure.

When all said and done, WD’s Black is a solid choice for those who need massive storage, but it’s impossible to ignore HGST’s drive which retails for $20 less. It’s expected that Seagate will release its first 4TB drive early this year, so it will be interesting to see how that drive will fare in the performance department.

To wrap this up, I have to say that it’s a little disappointing to see that the price of the HGST 4TB drive went up in price pretty significantly once the Black 4TB model was released. When we first talked about the Black 4TB in November, HGST’s drive retailed for $279.99. Post-release, it jumped to $309.99. Coincidence? I have my doubts. That said, even at $330, the drive offers a good value in comparison to the 2TB model ($0.0825 per GB vs. $0.09 per GB).