For notebook users, “size matters”. We’re not only talking about density here, but also physical size. Having the best of both worlds just hasn’t been an option for most people, because when a top-tier model gets released to the market, offering unparalleled densities, it’ll almost always feature a 12.5mm height, which most notebooks don’t support.

I have little doubt that when Western Digital unveiled its first 1TB mobile drive back in July of 2009, many shrugged at its 12.5mm requirement. Rinse and repeat when the company followed-up with an ‘Advanced Format’ variant this past January. For those with excellent patience thresholds, though, the wait for your 9.5mm 1TB hard drive is finally over.

With its WD10JPVT, Western Digital finally delivers a 1TB mobile offering that most people can take advantage of, while at the same time improving both power efficiency and shock resistance. WD pulled this drive off by implementing two 500GB platters under the hood, which until last week (Toshiba press release PDF) was the areal density leader for mobile drives. 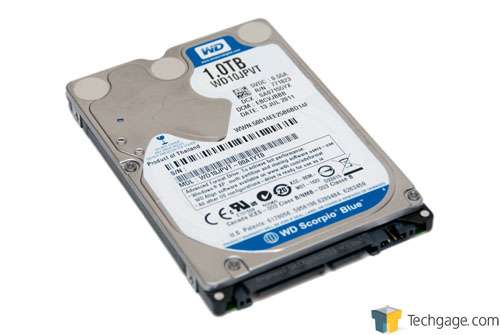 In a match-up between the 9.5mm WD10JPVT and 12.5mm WD10TPVT, WD’s latest drive increases the shock resistance from 350Gs to 400Gs, and decreases active power consumption from 1.7W to 1.4W – a minor, but appreciated decrease.

In addition to those improvements, Western Digital touts some other features unique to its drives that it points out in its press release (its competitors have similar technologies). ‘Shock Tolerant’ is one, tied to the fact that this drive boasts the best shock-protection on the market. ‘Advanced Format’ is another. Drives with “PVT” in their model name support this, and in essence means that the drive uses 4,096 byte sector sizes rather than 512 byte, for the most part improving the read/write/copy throughput speeds of larger files.

Cool, quiet and reliability are three factors that we’d hope any hard drive vendor would stress in developing their respective product, and Western Digital claims that both its ‘WhisperDrive’ and ‘SecurePark’ technologies will keep the drive quiet while also ensuring it has a long life ahead of it.

Another thing that WD states sets it apart from the rest is its FIT Lab, which we first learned about last year with the company’s launch of its SiliconBlue SSDs. In this lab, WD performs tests on hundreds of drives and systems to ensure absolute quality when the product leaves its door and reaches yours.

Currently, WD offers two classes of Scorpio mobile drives, Black and Blue; the former targeted at the high-end/enthusiast user; the latter for everyone else. Competition-wise, the Scorpio Blue series could be best compared to Seagate’s Momentus LP, which offers the same general performance claims overall. Density-wise, WD offers the much larger drives, as Seagate currently only offers up to 640GB for its Momentus LP series.

From this table, it becomes clear that the Scorpio Black drives would be preferred over the Blue for the sake of raw performance, but currently there doesn’t exist a 1TB option in that series – even at 12.5mm. In addition, as the Blue series offers better power consumption and acoustics, it might actually be preferred by some.

Western Digital’s latest 1TB drive may have one thing working in its favor, though. As its areal density is greater than that of the 750GB Black we’ll be testing (500GB per platter vs. 375GB), we could well see both drives match up in some tests.

As this is the first mobile hard drive review we’ve done in quite a while, we’re starting from scratch and introducing a more recent methodology. We’ll be receiving more mobile drives in the near future so that we can built up our test database as we do with much of our other content. That’s said, let’s take a quick look at our test system and benchmarking suite, then get straight into some results!