Where’s the Challenge: Have MMOs Become Too Easy?

by Rob Williams on July 5, 2013 in Editorials & Interviews, Gaming

When World of Warcraft launched in 2004, the world of MMO gaming immediately felt its impact. Competing titles didn’t stand much chance, and some were even canceled before release – all because they didn’t follow the standard that Blizzard inadvertently created. Is this a problem? For those who appreciate a rewarding experience, it can be.

Generally speaking, you could probably make the argument that games in general are made easier nowadays, although I wouldn’t agree with that entirely (given the fact that a lot of games have difficulty levels and MMOs don’t – unless you’re joining an Asian server, yuk yuk).

Do the masses simply not want a difficult experience? No, of course not. That’s the reason World of Warcraft became easier over time, and the reason it became so popular. People like to see results quick – that’s just the society we live in. I admit that I’m not the most patient person around, but with MMOs, I consider going from level 1 – (max) to be a journey. As a good friend of mine used to say, the journey should be about the experience – not the experience points.

Mark Kern seems to agree, as he states in his article:

“When the bar is lowered so that everyone can reach max level quickly, it makes getting to max level the only sense of accomplishment in the game. We lose the whole journey in between, a journey that is supposed to feel fun and rewarding on its own. Nobody stops to admire a beautiful zone or listen to story or lore, because there is no time to do so. You are fed from a fire-hose of quests that you feel compelled to blaze through, whose content is so easy and quick to accomplish, that you are never in one place long enough to appreciate the incredible world around you. We feel bored by these quests, simply watching numbers on our quest trackers count down to completion before we are fed the next line of quests. And you don’t feel satisfied from playing the game because it never challenged you.“

I couldn’t have said this better.

With those words, I imagine Rift is a lot like World of Warcraft. As mentioned before, I’ve almost reached the max level, after about 150 hours of gametime. In all that time, I’ve explored most of the game’s landmass. In AC today, I still stumble on things I’ve never seen before. Part of the reason is because of the huge landmass, but the other reason is that the game isn’t focused on the “end game”. You feel more compelled to explore because you know that the fun isn’t being withheld from you until you taste that magical number.

Rift is the opposite. Sometimes my quest book is so loaded, I need to hide some of the entries for a time until I can get through the other ones. Go from point A to point B, collect 10 things or kill 10 things, and then go back to quest giver who leads you to another quest giver in a new location. Rinse and repeat until level 60. Better still, the game even tells you exactly where to go on the map for these tasks, more often than not.

I make that sound pretty boring, but in truth, it’s not… that much. I’m not upset that I’m already almost at the max level, but I certainly don’t feel like I’ve “earned” it. I sit here thinking, “what the heck did I do to get here?”. I’ve passed through some areas so fast, I can’t even remember some of them.

I sit here thinking, “what the heck did I do to get here?”. I’ve passed through some areas so fast, I can’t even remember some of them.

Fast progression isn’t always the goal of the developer, and I’m sure a lot of them would like to avoid it. But sometimes, due to the game’s design, it might become almost necessary. Many consider the “vanilla” World of Warcraft to be the best, because it wasn’t quite as easy as the game is today – thus, it was more rewarding. But as the expansions and level cap increases came out, current players began to feel a sense of urgency to reach the top as quickly as possible, and new players wanted to rush in order to join their friends. This is another specific point that Mark raises:

“…xp was increased so that it was easier to level through all the old content to get to the “new stuff” of the expansion. Gear from the a new expansions first quests made raid gear from previous expansions a joke. And the level curve became faster and faster until we reached a point where everyone is just in a race to get to max level, and damn everything else in between. Why care about level 20 gear when you would blow by levels so fast it was obsolete before you even logged off for the night?“ 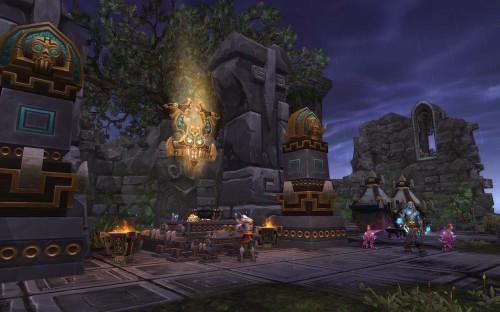 World of Warcraft: The MMO on which all most others are based

He goes on to mention that as a result of this inherent fast progression, quest designers have been forced to keep things as simple as possible. It’s the reason we see so many “kill 10 of these” type quests, instead of epic journeys.

Mark is the founder and team lead at Red 5 Studios and claims his company’s Firefall MMO does in fact focus more on the journey than the end game. I can’t verify this as I’ve never played the game, but I’m tempted to at least check it out and see how that holds true.

While Trion Worlds’ latest game, Defiance (reviewed here), also has its share of mediocre quests, its “end-game” essentially begins as soon as you create your character. A 10 hour old character could likely get along just fine with a 100 or 1,000 hour character. That’s one of the reasons I ended up enjoying the game so much – I didn’t feel like I had to level. I just teamed up with people and did some quests that I thought were fun, while seeking out bigger and better equipment.

If Firefall does in fact bring us an MMO that rewards players with a genuine feeling of satisfaction, then I think it’s great, and I’d like to see more of it. It saddens me to think of some classic MMOs that never reached their full potential, namely because World of Warcraft set a trend that they didn’t follow. I even partook in testing out a couple of MMOs that were canceled before release – nothing could compete with WoW in 2004 and the years that followed.

I’ve written about twice the number of words that I set out to, so now it’s your turn. What are your thoughts? Are MMO difficulties a la WoW just fine, or do you appreciate an actual challenge – even if it’s painful at times?