Windows 10 Is Broken: Fix It, Microsoft!

by Jamie Fletcher on October 30, 2016 in Editorials & Interviews, Software

It’s been over a year since Windows 10 rolled out to the masses. It’s been a year since the complaints have been rolling in. One of the most critical oversteps is Microsoft’s draconic control over system updates. It’s high time this was fixed without having to resort to low-level system hacks and workarounds.

I’m going to be rather unapologetic and upfront about this, as this lingering issue has been going on long enough and will continue to get worse as more people switch over to Windows 10.

Microsoft’s attitude with Windows Update is bad for business and bad for consumer expectations. Windows is not a software library or a fashion statement, it is plainly and factually, a tool. It facilitates the actions of other software which lets people do work or provide a means of entertainment.

When a tool stops you from working, deliberately and by design, it’s a bad tool.

Windows Update in its current form, deliberately and by design, stops you from working at indeterminate times, and often without consent. This makes Windows 10 a bad tool, and it needs to be fixed. 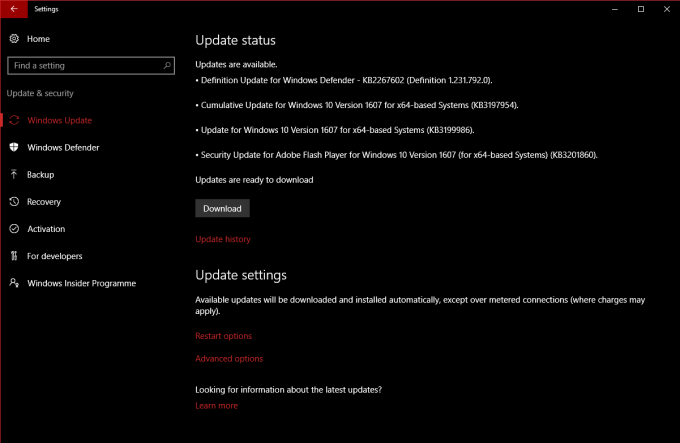 The Problem With Updates

First of all, let me clarify a few things about what the big deal is. With the introduction of Windows 10, Microsoft changed the way it handles updates. Part of this change was to get people to install critical security updates as soon as possible, to prevent widespread outbreaks of malware. A noble and lofty goal that’s worth pursuing.

The way this was achieved was a core change to the way Windows Update operates. In the past, users could change Windows settings so that it would either notify the user of any new updates and optionally download, without actually installing them. This meant users could install at a time convenient to them, or when the system reboots/shutdowns. This was very convenient, especially for businesses, as it meant at the end of the work day, systems would be updated without interrupting work.

For the most part, this worked. Any updates could be held off until such a time as to when the user chose to install them. The problem is that some people chose to keep the updates withheld for weeks or even months at a time – not good practice for the security conscious.

With Windows 10, this ability to choose when and where updates could be installed was removed. All updates were mandatory and were installed at a time Microsoft chose to install them.

Sure, you could tell Windows to put off the update until later that day, or until you reboot (as long as it was now). If you don’t see the prompt that says updates are about to be installed, like you just so happen to be on a lunch break, Windows will kindly reboot your PC for you to install the updates. Any unsaved work, gone. Thank you very much, Microsoft. Thank you…

That right there, is at the heart of this issue. Microsoft has made a very serious and fundamental mistake:

A PC Is Not A Person

It seems obvious, right? We’re surrounded by computers; some in use, some not. Some are always on, like our routers and modems. Some are on standby until we need them, like phones and TVs. Some sit in the background, performing the odd, low-level task, with long bouts of idle time.

Problems arise where the system is ‘idle’ but is actually doing something. Maybe, like me, you have a really bad Internet connection, and downloads can take many, many hours. This is considered an idle task, since downloading at less than 1MB/s is hardly taxing for the system – but it is doing something.

With 12 hour downloads becoming more and more common for me, especially as games are regularly exceeding 50GB, it’s nice to know that those security updates take precedence and reboot the system half way through, effectively wasting several hours of time.

Lost download time is more often than not, just a mild inconvenience to the real problems that can crop up. Take this for example: A long simulation that took a week to complete, is wiped out because Windows Update needed to install an update. The system obviously wasn’t idle, but because no user was present to postpone that update, Windows kindly rebooted the system for them. It goes without saying, “mild inconvenience” would be an understatement.

What aggravates the issue is that the person above actively took steps to prevent the system from rebooting to begin with. Microsoft chose to ignore these settings and rebooted the system anyway. The recent Anniversary update that was rolled out changed a great deal of settings relating to Windows Update, effectively disabling people’s ability to prevent system initiated reboots.

In the past, Windows installed updates when the system was ‘idle’. Now with 10, it doesn’t care. If the system is in use, it’ll nag you with prompts that it needs rebooting. You can postpone the update sometimes, but you are limited by how long.

Switching the default behavior to schedule updates instead of automatic may help, but this is again another rule breaker. Schedule will only define a 12 hour slot in the day of when to leave the system alone. Microsoft has yet again assumed the PC is a person who works 12 hours a day. 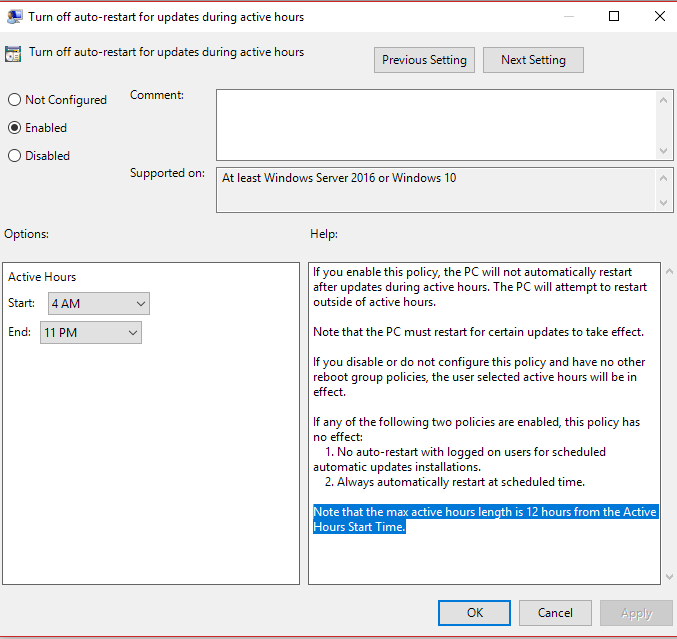 Security is important, and Microsoft wants to prevent that maelstrom of bad press and breach after breach that was Windows XP. By getting as many people as secure as possible as quickly as possible, it wants to initiate herd immunity. One less system infection can prevent dozens or even hundreds more from being infected too.

The problem with forced updates is that people who actually need to work, and typically have some kind of security practice in place, are getting lumped in with this change. If you want to take back full control of updates, you have to cough up for Enterprise and Education editions of the OS. The problem is that you can’t actually buy individual licenses for those editions, and instead have to setup a volume license plan and a license management server. If you run a small business of less than 10 people, it just doesn’t make sense to use the Enterprise edition.

If you have Windows 10 Pro, you can take back some control of updates by using the group policy editor and enabling notify only, instead of automatic downloads (read our guide here). The catch is that you don’t have selective control over the updates; you install all of them, or wait to install all of them later.

Group policy works to some extent, but after a few days of ignoring updates, Windows will kindly start putting full-screen splash notifications that steal focus from apps (including fullscreen apps like games). This warning can not be closed unless you go to Updates, and it prevents you from clicking anywhere else. Again, another work interruption.

Windows 10 Home users are almost completely out of luck with this one. At least with Pro and the Group Policy Editor, updates could be installed at a time you choose, even with the nag screen that can pop up twice a day. Home users’ only effective method is to completely disable Windows Update altogether, which also disables the Windows Store (there goes another cash-cow). The user then has to remember to turn updates back on in order to install anything or use the Microsoft Store.

Being told of updates and postponing/ignoring them is up to the user. If they decide to not patch the system for 6 months because it’s inconvenient – that’s their problem. If a user disables updates because Windows repeatedly interrupts or even causes loss of work/time, that’s Microsoft’s fault for pushing the user into that situation.

Of course, if work is that critical, the user should upgrade to Pro or Enterprise, and then go into group policy and change some setting buried four layers down a huge tree, just to get back the same functionality that has existed with every version of Windows for the last 15 years.

For the average Home user, even the old setting of ‘install updates on shutdown’ is no longer available. Microsoft wants you to install those updates now, convenience be damned. If that update just so happens to put your system into an infinite loop, or in my case, install the Anniversary update without my consent, breaking the system in the process, requiring three hours of troubleshooting to determine that Windows had corrupted the system password and PIN, requiring my Microsoft account’s password to be reset… then tough luck. Better upgrade to Pro.

Windows 10 is a great OS. It has many useful features, it fixed a lot that was wrong with 8, introduced people to multi-desktop environments – there are lots of little things that make it great. But the changes to Windows Update… while not as obvious a problem as the removal of the Start button from 8, is an inherently bad design choice. Microsoft’s stance on the issue? Complete silence, despite it being one of the biggest complaints against the OS, the next being updates burning through data caps.

It’s easy to say that people should switch OSes, but quite often, people really don’t have a choice. Until business moves away, and Autodesk, Adobe and game publishers take an active role in taking other operating systems seriously, we’re going to be stuck here for a while. All we can really do is complain until we’re blue in the face and say ‘no’ where possible.