Windows 8 Review – Part One: The Things I Hate

You’ve heard it here first: Microsoft is about to release a new version of Windows. Called “Windows 8”, the OS aims to change the way we use our computers, and it’s been built from the ground up with touch in mind. Like all other OS releases, there’s both things to admire and things to complain about. First, we’ll tackle the latter.

UAC can be a nag

Way back in 2007, prior to the launch of Windows Vista, I wrote an article much like this one where I tackled the top 8 things about the OS that annoyed me. Lo and behold, one of the mentions there makes a return here, although perhaps not for the same reasons.

In order to experience Windows 8 as it will be by the average user, I’ve left UAC on for the time-being. I wanted to see what kind of nag it could be over time, and also see if I could actually end up leaving it on. You know… to feel a bit safer. Well, so far, I’ve been finding it to be more problematic than it’s worth, and for reasons I’m not sure of.

As an example, Notepad++ won’t save certain customization options unless I run the program as Administrator. This could be considered a Notepad++ issue, but what could the program possibly be doing that doesn’t let me save a font choice? Because of this limitation, the only way to have Notepad++ run fine all the time is to run it as Administrator – which, because of UAC, results in me having to click a “Yes” each time I open it.

I also need to authorize any Steam game any time I start one up. It’d be nice if Windows asked me if I’d like to permanently add a program to a whitelist, but it doesn’t. So I either have to put up with these regular nags, or disable UAC entirely.

The search can be useless – until you configure it

I’ve never been a big fan of the search tool in Windows, but with the new Start screen (did I talk about that already?) it’s made even more useless – unless what you’re searching for happens to be in your main user folder. A couple of nights ago, I wanted to search the entire PC for a particular folder, and upon hitting Ctrl + F, I was brought not to a pop-up search tool, but a search tool found within the Modern UI. For what I was trying to do, this was totally useless.

In order for the search to find a lot more than just what’s in your user folder, you’ll need to add directories to the search index. The problem is, it’s not immediately obvious that this is what you need to do. This becomes yet another issue I am sure will creep up for a lot of people – those especially not exactly the techie type.

For those who don’t want to mess with indexes, the alternative is to open a folder up and use the top-right search box. This in itself should negate the problem of the limited Modern UI search, but honestly, if I push Ctrl + F, I want to see a real search. In addition, when searching from this box, the entire PC will be searched – there are no fine-tuning options available in Windows 8.

Shutting Down and Rebooting is tedious

A video that made the rounds last week showed a host interviewing random folk on the street to see what they thought of Windows 8, and one of the tests offered was shutting down the PC. Now, these people were left clueless. That’s sensible, right? These are just random people found on the street, after all. But no, it’s not that at all. Even I, the first time I used the Windows 8 beta, was left seriously confused about shutting down.

This might be fine if it’s a case where, once something is learned, it becomes easier, but this is an exception. The easiest way to shutdown in Windows 8 is to hover your mouse over the bottom right-hand corner to bring up the Charms bar. Once there, you click on Settings, then Power and choose your option. The alternative is to logout and then choose the option there.

Microsoft, was there something wrong with offering the power options right inside of the Start screen? A common retort to this issue I’ve seen is, “Just hit the power button on the computer.”, and that’s fair, but useless if what you really want is a reboot. This is something that’s going to lead many to create their own shortcuts to place in their Start screen (the command is ‘shutdown -s -t 0’, for the record; -s is shutdown and -r is reboot).

Thanks to the fact that Windows 8 employs both regular desktop and Modern UI apps, using two programs for a similar task can be a little frustrating. The best example for this I have is with Web browsers. I use Chrome as my primary, but on rare occasion I load up Firefox or Internet Explorer for the sake of testing a change on the site or some other purpose. Prior to Windows 8, this was never a problem. Some apps might ask you to set a default, but once you tell them to lay off, they do. 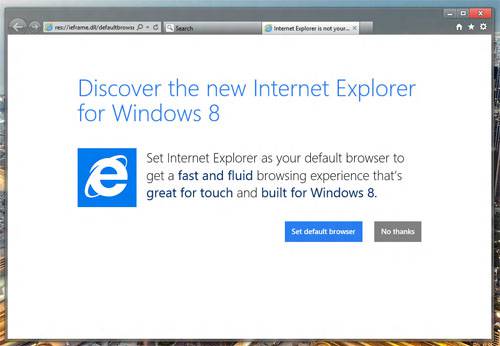 In Windows 8, it’s assumed that the browser you make default is the one you want to use in the Modern UI as well. As such, you’re simply not allowed to use more than one browser in the Modern UI interface at once, because in order for one to work there, it must be made default. So – don’t expect to use Chrome on the desktop and IE in Modern UI.

For someone who likes Windows 8, I sure do have a lot of complaints, don’t I? As I touched on before, when there’s a piece of software that people use day-in-and-day-out, there’s going to be a lot of issues that stand out when a major revamp like this is seen. It’s just a given. Windows 8 is the most ambitious OS Microsoft has ever released, and also the riskiest. This is definitely a revolutionary release, not just an evolutionary one, and it may very well take the entire release generation for people to reach their own conclusions.

We may end up seeing more people favor the changes Microsoft has implemented here than dislike them, although as pointed out in this article, there could have been a lot that Microsoft did different to make the transition just a bit easier. A robust tutorial, for example, would have helped things a lot, rather than have just a quick introduction video.

To me, the biggest issue with Windows 8 – aside from the lack of choice between Start menus – is with the lack of customization in the Modern UI. You can’t perfect the color scheme to your tastes, can’t change the background wallpaper, can’t change the sizes of the tiles, can’t place the tiles wherever you want (it insists upon a specific orientation) and you can’t adjust its sizing so that it doesn’t take up the entire screen. That last part is important, because not everyone has a billion apps installed, and not everyone will use any of the Modern UI apps. Having the option to scale the Start screen, then, would have been excellent.

As I mentioned at the outset, there’s a lot to love about Windows 8, too. That article will be posted very soon, because we really need some love to balance out this article!