I can hear you asking, "But Matt, how does it perform?" I’m getting to that, be patient.

Now the numbers for the base cooling of a Swiftech Apex Ultra with an MCW60 on the GPU: 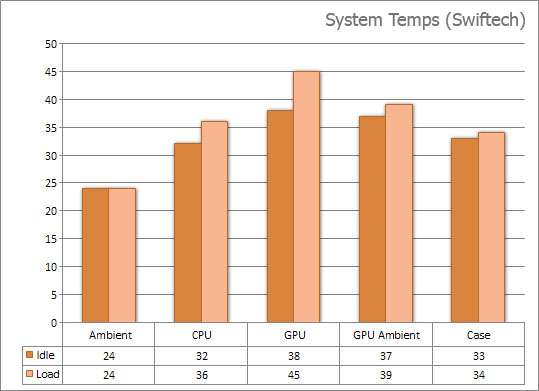 Not too shabby considering that the heat from the radiator is being dumped in the case.

And for the numbers from the Reserator: 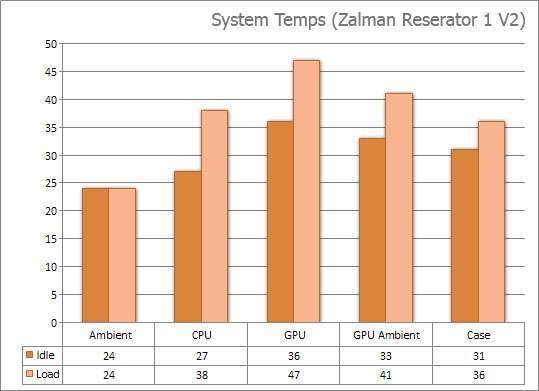 What I find interesting is that overall the highs are on average 2°C higher and the lows are 2°C lower except on the CPU, the CPU is running a full 5°C lower at idle but the loads are still showing a 2°C increase. Considering that this is widely regarded as a non-performance kit I’m very impressed. I’m putting a close to 200W(calculated) heat load on the loops and the Reserator is handling it like a champ. Does this mean that the Zalman is a replacement for high end water cooling? Let’s not get ahead of ourselves. I’m running my Swiftech with the fans turned down to about 6V, there’s considerably more overhead to it’s capability but I was running it for as much silence as possible. This begs the question, what added capability does adding the ZM-RF1 Fan Kit add to the mix? 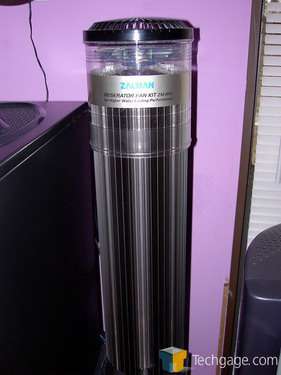 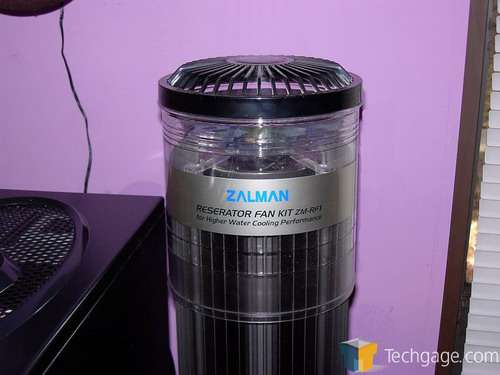 Having the warm water return to the top of the unit and having a pump capable of causing the water to become agitated throughout the body of the unit would radically increase its thermal capacity. That said this unit is an effective replacement for high end air cooling. It’s dead silent, looks cooler than hell and it’s painless (mostly) to set up. It removes a lot of the heat generated from the case thus allowing for lower overall CFM’s required to evacuate the heat from your PC. This translates into noise prevention and makes for an improved computing experience.

If you do decide to get the Reserator 1 V2 forego the Fan Kit and spend that money on some silent case fans. The Fan Kit is extremely loud at full speed and even at the full speed makes no difference in operating temps so the money would be better invested elsewhere. Now, if you decided to use an external pump such as the Swiftech 355 and modified the water return to bring the return water to the top of the Reserator’s tank the fan could have an effect but it would still add considerable noise to the unit.

Let’s run it up the flagpole and see who salutes.

Just too far out man

Overall I walked away from the Reserator 1 V2 impressed. For what it does it does it well and that’s giving very good cooling with no noise. Indeed I could not hear a single sound from the pump during testing. I do think that upgrading the pump to a Liang DDC would be a wise move on Zalman’s part. That and extending the return port to bring the heated water up to the top of the tank would really bring this unit to life.

That said I’m awarding the Reserator 1 V2 a 7/10 and advising against spending the extra cash on the ZM-RF1. Like I said before, you’d be better served to use that money elsewhere.