With everything installed, we are now ready for testing. To test the Reserator 2, temperatures with the CPU running idle and under 100% on both cores will be taken. This will be done at stock clocks as well as under overclocked conditions. The Intel E6600 will be overclocked to 3.29 GHz at 1.35v. To get the CPU up to 100% load, instances of CPU Burn-In will be ran, one for each core. This will be done for 45 minutes and the temperatures (in Celsius) will be recorded. Ambient temperature in the office is set at 75 degrees Fahrenheit (23.8 Celsius).

Before we get into the results, letâ€™s take a look at the test system. 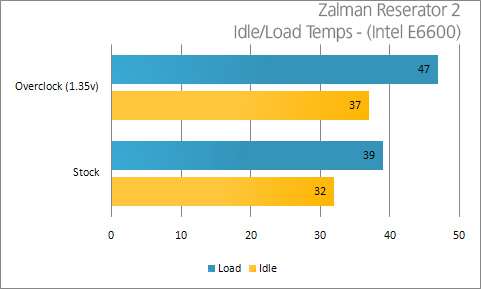 There it is. While not as powerful as a custom water kit from some of the larger water companies, the Reserator performs exceptionally well. It should be mentioned though that it was never Zalmanâ€™s aim to supplant the likes of Asetek, Danger Den and Swiftech, but to rather provide a complete, easy to install option. Zalman has accomplished this all while making a perfectly silent product. In fact, the Reserator is so quiet that unless I placed my ear to it, I couldnâ€™t even tell it was running. I would be willing to bet that 99% of all users have enough ambient noise around them, no matter how quiet it may be, that they wouldnâ€™t even know the Reserator was on if it werenâ€™t for the flow meter in the front of the unit. 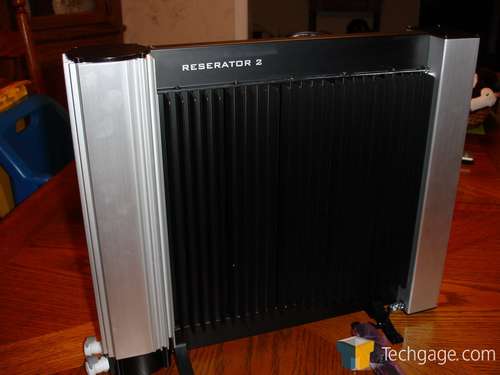 Installation of the Reserator took just under 2 hours and that was with me taking pictures throughout the process. This included taking the benching PC and placing it in a computer tower as well. If you take the silent operation, the better than air cooling capacity and the classy design, you get one solid product that for the price is a viable choice for those who need a quiet PC. Something like this would be absolutely perfect for people with their PC in their room. I have read articles that suggest that this would make a great cooler for an HTPC machine but for me, I donâ€™t care for the external design and would not want this setup in my entertainment center. That is just one manâ€™s opinion though.

The uses for this cooler are vast. I personally like how this looks on my desk, next to my PC. The soft blue light, which can be turned off and on for those of you who keep their PC in their bedroom, looks nice in the dark and ultimately adds to the overall feel the Reserator. With that said, my only main complaints are the lack of extra screws and the external nature. One or two extra screws arenâ€™t going to kill anybody is it?

With a street price of just over $300, the Reserator 2 isnâ€™t cheap but with all of the benefits that come with it, Zalman managed to squeeze every pennies worth into the cooler. With all things considered, the Zalman Reserator 2 earns a solid 8 out of 10. The coolers not perfect, but itâ€™s pretty darn close. Well done Zalman.