It’s been a good two-and-a-half years since we’ve taken a look at a Zalman chassis, so with the announcement of the ~$69 Z9 Plus, we were eager to get one in and see how it compared to the current fleet of sub-$100 offerings on the market. With that, let’s see what the Z9 Plus gives us aside from its good looks and focus on efficient airflow.

This being my first experience with a Zalman case, I wasn’t sure what to expect. I have used its CPU coolers in the past and reviewed an external hard drive enclosure, but have heard good things about its cases. Along the way, though, I ran into two problems that will make or break this case.

The first was that the frame didn’t seem quite square. When installing the motherboard I was able to line it up with the standoffs but it didn’t quite line up to the rear I/O shield. It wasn’t off by much but it’s enough to cause some concern. As I worked my way down the case and installed the GPU and NIC card I found that they did not line up properly either.

In order to secure the GPU in place I had to push it towards the PCI slot opening and hold it there while I secured it in place. The same had to be done with the NIC card but to a greater extent since it was further down the case in the bottom PCI-E slot. Both components did install but there is a fair bit of force being placed on the first PCI-E slot since it locks the GPU in place and the NIC card almost feels like it’s close to not making proper contact. 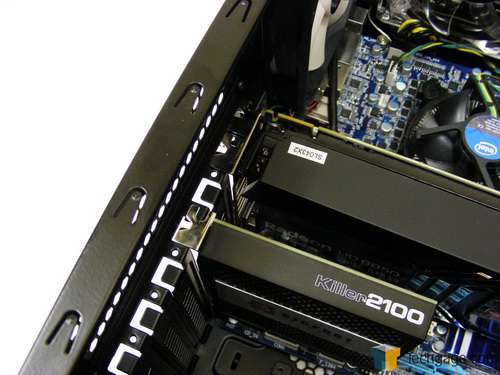 The second issue was when installing a solid-state drive behind the motherboard tray, the four tabs where the screws are threaded through were too tight. I was able to bend them out by hand to allow the drive to fit. The fact that I could bend them by hand coupled with the issue with the expansion cards makes me think that this case may be prone to warping. The shipping box was in near perfect condition and the Styrofoam end caps used to keep it safe during transit were in tact as well.

Aside from that, everything went in lickity-split. All of the front panel cables were long enough to reach the connections on the motherboard, even the poorly placed audio header at the very back of the board. Kudos to the Zalman design team on the hard drive mounting system too. It is one of the most solid tool-less systems I have ever used. Screws are pushed through rubber washers and are secured into the side of the drive. The drive then slides in on the drive bay rails where plastic clips keep them firmly in place. 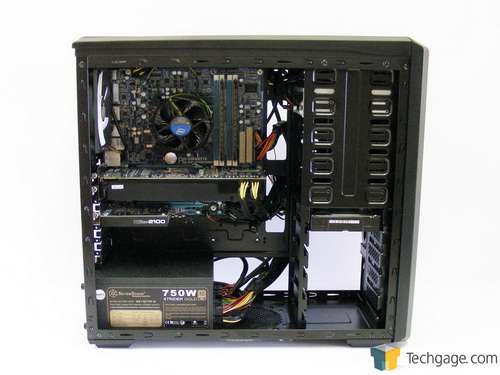 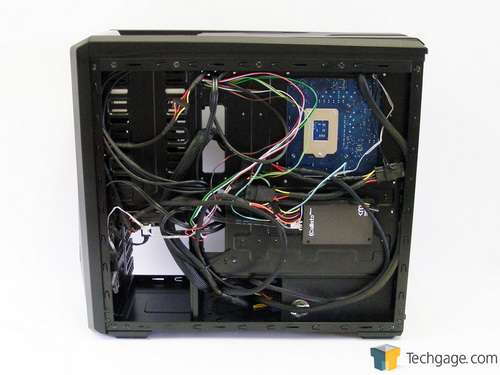 Sadly, the CoolIT Vantage used in my earlier review of the SilverStone FT03 met with an untimely demise, so stock cooling is being used to test temperatures. Due to the fact that the stock Intel heatsink is grossly underpowered, even running LinX through the use of OCCT to test full load temperatures proved to be too dangerous as they went into the 90s. Due to this, only stock idle CPU temperatures are available.

I was able to test the temperatures on the GPU however. A 20 minute run of OCCT’s built in GPU test was performed at stock clocks and again while overclocked. The final clocks were 1020MHz on the core and 1200MHz for the memory with a +0.025V increase using Sapphire Technology’s TriXX overclocking utility. Stability testing was done prior to ensure the GPU test completes the full run with AIDA64 Extreme Engineer monitoring and recording all temperatures.

Our case testing system is still in the works but once those components are finalized, a database of stock and overclocked CPU and GPU temperatures will be built for comparison purposes to ensure future cases deliver on cooling, so stay tuned for that.