In the introduction to this article, I mentioned that due to a string of what some might consider bad luck, this article wound up being posted far later than I hoped it’d be. But, despite it finally being up, it’s still lacking a few things, most notably overclocking reports and power consumption.

Let’s start with overclocking, which we had to forego testing of due to time. For the most part, neither of these cards “need” to be overclocked, as they are two of the most powerful on the market right now. Some might consider even contemplating overclocking to be a waste of time, and for the most part, I’d agree.

However, the GTX 295 might be the card to benefit a little from a boosted frequency, only because its clocks are lower than the GTX 285. But, it will be difficult to achieve high clocks on a dual-GPU card, so it’s really up to you whether or not you want to spend an evening finding a sweet spot for only a few extra MHz’s.

The lack of power consumption results is simple. During the string of bad luck, my Kill-A-Watt decided that it was time to kick the bucket. Talk about great timing! Because I live in such a remote country (Canada), I wasn’t able to get in a replacement as quick as I’d like, but it will be here this week. Once it hits my doorstep, I’ll go back and re-test each card to produce some results. Once done, I’ll update this article with the respective graph.

Lastly, another issue that crept up were problems with ATI’s graphics drivers, which was the main reason for being able to include only two ATI cards. Even still, I’m not entirely confident with the results shown for both the HD 4870 1GB and HD 4870 X2 2GB, because I found many hitches during runs in a few select titles (Call of Duty: World at War, and Far Cry 2, especially). I won’t get deep into the story here, but you can feel free to check out both my news post where I explain the issues, and also the discussion thread where I delve even deeper into things.

With all of that whining out of the way, let’s get right to my conclusions on NVIDIA’s latest releases. One of NVIDIA’s goals with these new cards was to grab back the top spot for performance, and they’ve accomplished that with both of these. On the GTX 285 side of things, the card proves to be the fastest single-GPU solution on the market, and has a comfortable lead ahead of the GTX 280 in most tests.

That card is a little unique in a strange way, though. Essentially, it didn’t really have to be released, because it doesn’t add much in way of major performance gains, over the GTX 280. However, since NVIDIA finally managed to bring their GTX 200 core to a 55nm process, it only made sense to release a single-GPU version of the card, so that can’t be faulted.

Is the GTX 285 worth it, then? For the most part, it can be, but it depends on what you are looking for. From a performance perspective, it scales pretty well with the GTX 280, and for that increase, there will be ~$50 tacked onto the final price. Additional benefits would be slightly lower temperatures and a lower power draw, clock-for-clock, compared to the previous card. So you can take that information into consideration when trying to decide on one. 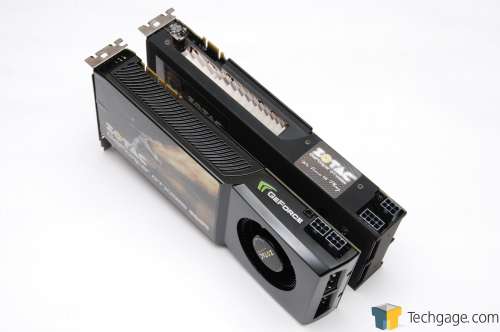 How about the GTX 295? Well, despite the $500 price tag, I have to say that this card is one of the most fun I’ve benchmarked with in a while. Plain and simple, it’s a powerhouse, and becomes the fastest dual-GPU graphics card on the market. Like most things, there’s a price premium to be had with the GTX 295, but it’s not that stark, and in some ways, scales well with the performance of the HD 4870 X2. While the latter card can be had for as low as ~$410 nowadays, the GTX 295 is currently selling for precisely $499.

With the power that the GTX 295 offers though, there’s only one type of consumer that it’s targeting… one who owns a 30″ display capable of running a 2560×1600 resolution. If you don’t own such a display, the value just isn’t there. It’d be similar to purchasing a Ferrari to drive around a small town. You would be buying way more card than you need, and as a result, you’d be throwing your money away. Future titles may benefit more with this card at 1920×1200, but chances are good that it’s far enough in the future that you’d still be throwing your money away now.

As seen throughout all of our results, smaller cards, such as the GTX 260/216, is capable of running most games just fine at 2560×1600, and where it can’t, it can usually handle 1920×1200 with increased settings at great average FPS’. Both the GTX 285 and GTX 295 are for the enthusiasts, those who want to see their games at the highest quality levels, with good framerates. If you own a 24″ monitor, the GTX 285 would be a far better choice over the GTX 295.

The GTX 295 has become one an instant-favorite of mine, though, because it ran well in every game I ran it through (though it lagged behind in NFS: Undercover for some reason), and despite being a dual-GPU card, I didn’t run into any of the common issues that can at times plague such cards. The experience overall was great, and if I were to build a new machine today (and include a 30″ monitor), I wouldn’t hesitate to pick one up. $500 used to be the norm for high-end GPUs… but look at what this one actually gives you. The dollar to value ratio continues to grow ever-better, and it’s great to see.