A Quick Reminder That It’s Important To Keep Good Backups!

Many times over the course of Techgage’s life, we have extolled the virtues of keeping your data backed up. If you didn’t ever realize it because we told you, you’d definitely know it after losing important files because you were too careless to protect them. I have lost data that I’ve wanted to keep, twice – and the last time was over a decade ago. Today, I try to keep the best backups I can, and this week, being proactive saved me.

On Thursday, I had done quite a bit of work on our internal test scripts for fresh benchmarking that’ll be taking place for some upcoming performance content, and before the night was through, I decided to load up a game. Before long, I was flashed a blue-screen-of-death – and long story short, my C: drive SSD died. 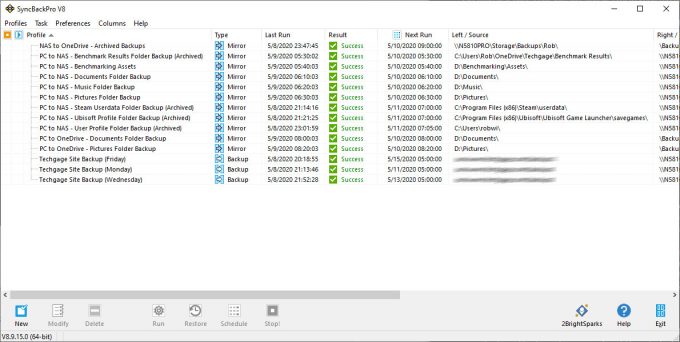 SyncBack does the bulk of my backup heavy lifting

On this C: drive, I keep absolutely everything related to the website, from content to scripts, and while I have everything backed up each morning at 6AM, using the seriously useful SyncBack utility, any work I get done on the PC during the day would get lost if the PC managed to crash before that next morning backup. Which is of course exactly what happened.

If this was as far as my backups went, I would have lost significant work, and not to mention, significant steam. Fortunately, OneDrive was here to save the day, as I have it continually monitoring all integral work folders, ensuring that everything is instantly synced to online storage as quickly as it can get uploaded. Because my SSD decided to die while I was playing a game, my work folders were fortunately completely synced. As it happens, it wasn’t only SyncBack saving backups to network storage and OneDrive syncing all my work to the cloud that saved me headaches, but also Acronis, which I have been using to keep my C: backed up online. While some of my SyncBack profiles capture a lot of my Windows User profile folder, Acronis allowed me to restore what I accidentally had left out of the profile. Acronis True Image syncs my C: to cloud once a week

I have recovered from system crashes in the past, but this latest hassle reminded me of just how important good backup schemes are. I could have lost a lot of data, but instead, I don’t think I lost anything, because of how meticulously the backup schemes have been set up. To keep things easier to follow, I keep a notepad file that reminds me of every single backup process I have in action, which both helps to ensure that I know when backups are going to take place, where, and also figure out easier if I am still missing something that should be captured.

It only takes a single failure to truly make you want to kick your own arse for not taking enough precaution – so let this post act as another warning! Now if only RAID 1 of M.2 drives was a little more straightforward…