A Quick Look at Our Updated Motherboard Testing Suite

As regular readers of Techgage are no doubt aware, we have been working to update some of our test suites that we use to benchmark various bits of hardware, from CPUs to motherboards to GPUs and beyond. We’ve most recently finished up a revised motherboard testing suite, and that’s what I’m going to talk a little bit about here. While we’re knee-deep in benchmarking some of the boards we have, we’re still about a week off from being able to publish some related content. 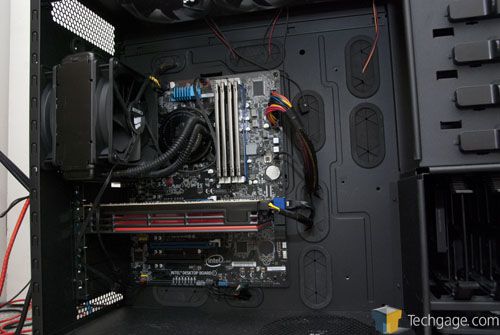 With this suite revision, we’ve updated some of the benchmarks we use, purged others, and added some new ones. In the past, we’ve overlooked a couple of important motherboard features that we could have been testing all along, so we’ve remedied that in this revision – with the most notable additions being Ethernet testing, and also Windows boot times.

When all said and done, here is our updated test suite:

Overall, we feel that our updated test suite hits all the marks where it counts. With it, we’ll be able to test the overall performance (and performance hindrances) from a given motherboard, and tackle certain other aspects that we don’t often consider – such as boot times and Ethernet testing.

I mentioned “performance hindrances”, and to me, that’s the reason we’re interested in running so many benchmarks – not to see how one board performs over the other. After all, while you’d expect performance differences to be seen when comparing one CPU to another (different models), motherboards are not the performance factor in the PC – or at least, they shouldn’t be. Hence, the hindrance.

Given this, it might seem reasonable to believe that all motherboards should perform just about the same. For the most part, there’s no fault in that logic. But, because some vendors use higher-quality components, the overall performance might not falter on some level as a board that uses sub-par components. As you’ll see in our results once published, an Intel board performed notably worse than an ASUS board, and the reason boils down to both the components used and also the overall design (and sub-systems like power management, voltage regulation, et cetera).

That all said, some aspects of our list above might seem a bit odd, but all have a purpose. BCLK value, for example, will be tackled due to something we’ve noticed over the years – vendors inching their BCLK just a bit higher than stock values, to gain a slight edge. If we publish this information (99.8MHz vs. 100.4MHz can make a difference in synthetics), then it can give you an idea that if one board performs just a bit better than another, it could be due to an increased BCLK.

After a too-long drought, we’ll be publishing some reviews beginning next week, with a P67 roundup to kick things off. Not long after that, we’ll be tackling Z68 boards, and anything else that comes out down the road. So, stay tuned, and as always, comments are welcome.