At January’s CES, NVIDIA impressed us so much with their ION platform, that we awarded it one of our Best of awards. Since that time though, the company has been rather quiet with regards to how ION was progressing, and the excitement was beginning to fade as no announcements had been made. That changes today though, with the unveiling of Acer’s AspireRevo, the first PC to use the ION platform.

Compared to a standard ATX chassis, the AspireRevo is 30x smaller, but it’s able to deliver 10x the graphical horsepower of similar Atom-based machines. The name “ION” is now more than just a name, as it’s become both a brand and the name of the included GPU… no “GeForce” here. The GPU is similar to those found in current MacBook’s, however.

Despite its size, the AspireRevo features a fair amount of connectivity. For video, a VGA and HDMI port are made available, with DVI being accomplished with the help of an adapter included in the box. There’s no shortage of peripheral connectivity, as the back of the unit sports 4 USB ports and also the LAN port, while two more USB ports are found on the front and top, for a total of six. Also in the front are the audio connectors, eSATA port and also a memory card reader.

For the size and price-point, this machine is truly packed. NVIDIA stressed the fact that even though the machine draws a low amount of power compared to modest desktops, it’s powerful enough to a) run Windows Vista with Aero and b) handle high-definition playback. Users can either run HD content right off the machine itself, or use an external Blu-ray player and enjoy their movies that way. 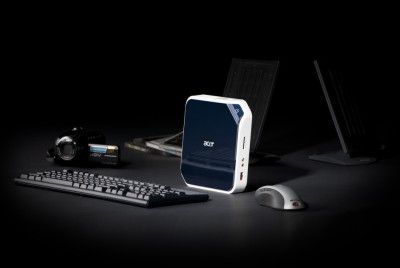 It took a little while before we were able to see that ION was still alive and well, but with a big name like Acer backing the platform, it has a good chance of succeeding in the marketplace. Not to mention that at this price-point, adoption will be much easier for many people. For $300, you get a small PC that’s capable of regular desktop use and HD playback, includes tons of functionality and a copy of Windows Vista Home Premium. If that’s not a good value, I don’t know what is.

I’ve included the full specs of the machine and additional pictures in the thread.