AMD is making available the next installment in its Radeon Navi GPU rollout with the release of the RX 5500 series. These GPUs will be first Navi GPUs to be released to the mobile market, as well as desktops.

These GPUs will be released straight-to-AIB products, meaning no reference design restrictions, so companies can release custom coolers and overclocks as they see fit. However, rollout will be slower than normal, likely due to high-demand from TSMC, AMD’s silicon production partner. 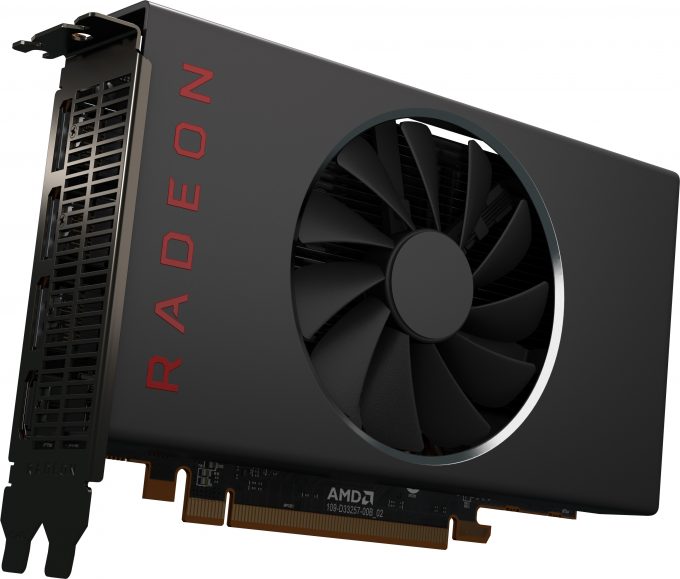 Instead of being released as discrete GPUs available for retail, they will first be released to System Integrators (SI partners), such as HP and Lenovo, and in laptops from the likes of MSI. Board partners will slowly start to release stand-alone RX 5500 GPUs in the coming months.

The Radeon RX 5500 is a rather modest GPU, and at first glance appears to be somewhat underwhelming compared to the existing Navi-based GPUs, the RX 5700 and XT. During our briefing, performance was mentioned to be 12% better than the rather old Polaris-based GPUs, not the RX 580 or even the RX 590, but the RX 480. If we go by pure TFLOPS, then the RX 5500 is comparable to an RX 570, but we know from history that TFLOPS is not a clear indicator of real-world performance, and it will be up to benchmarks to figure out where the card actually sits.

Being compared to an RX 480 or 590 isn’t necessarily a bad thing, if the price is right, since this is a low-end Navi GPU compared to a top-end Polaris GPU, so there is a generational leap. Being Navi, the RX 5500 uses the 7nm manufacture process which will cut down power, and will use PCIe 4.0 as well. 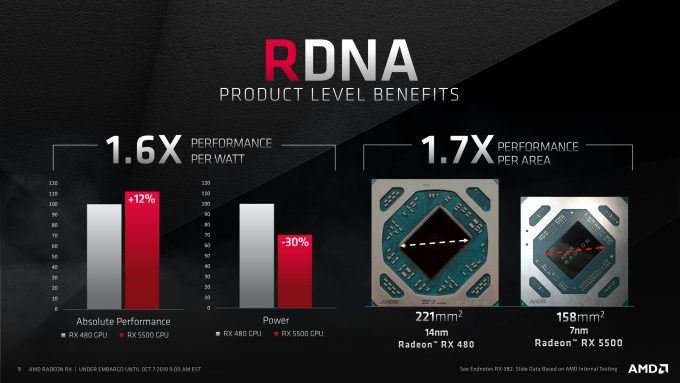 What caught attention was some weird memory listings. Let’s take a quick look at the specs: 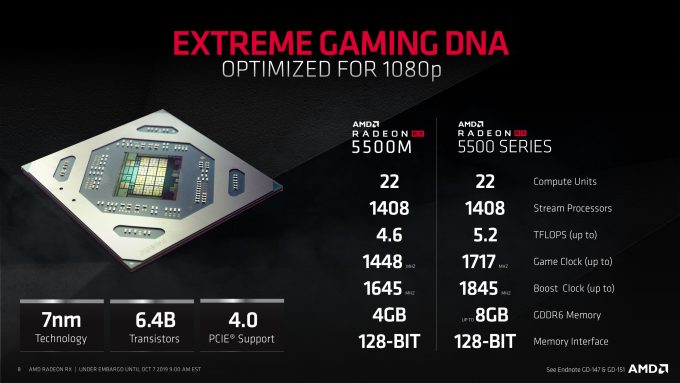 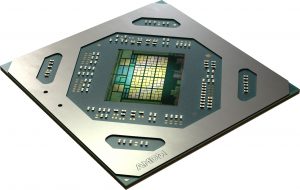 First off, the memory bus is 128-bits, half that of the other Navi cards. It’s GDDR6 at least, which is a step up from Polaris, and NVIDIA’s low-end Turing cards which still use GDDR5, but AMD is using 16Gb modules for higher density. AMD stated that the limited bus isn’t an issue due to both the higher clocks speeds of GDDR6, plus architecture improvements for Navi. There is also the infamous ‘Up to’ being used for 8GB on the desktop card, meaning that there will be a 4GB SKU of the RX 5500 to worry about for those not paying attention when purchasing.

Fundamentally, the RX 5500 is targeted squarely at 1080p gaming, with more of a focus on eSports titles. AMD also appears to be targeting NVIDIA’s GeForce GTX 1650 as well, with self-reported performance being 10-37% faster in a variety of games, including Fortnite, Apex, PUBG, Overwatch, Borderlands 3, and Gears 5. Reading the footnotes, these tests were done with the 4GB variant of the RX 5500, DX11, with medium settings for premium titles, and high/ultra graphics for eSports. 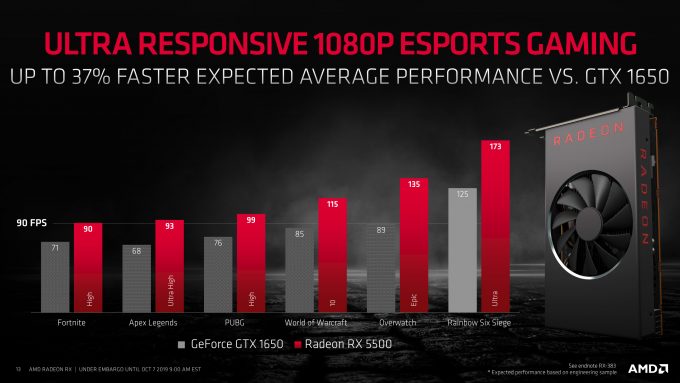 AMD is also changing up how it reports clock speeds as well, and is ditching base-clock from its material moving forward, and is instead reporting ‘game clock’, the boost clock will remain the same. The game clock has been used before, but not directly mentioned, and is the expected average frequency a game will run at under normal load.

Being a 150 Watt TDP card, RX 5500 will make use of a 6-pin PCIe power connector, or an 8-pin for board partners that sell overclocked cards. This rather high power target does place these Navi cards as more mid-range than low-end, so there may well be lower-tier GPUs coming, most likely for mobile, though. 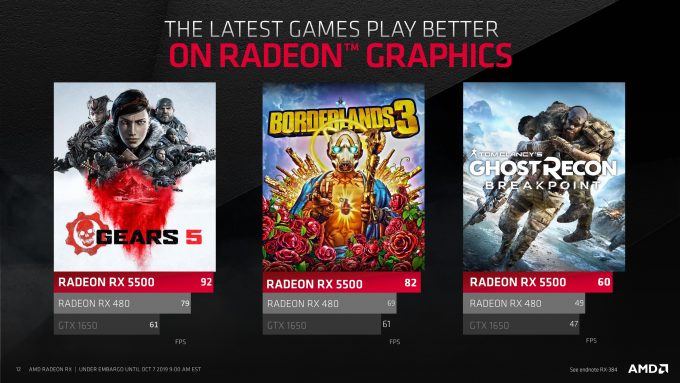 The mobile version of the RX 5500 has a much lower TDP of 85 Watts, but keeps many of the same features, just limited to 4GB of memory and lower clocks. These are still expected to be eSports GPUs for mid-range laptops. One of MSI’s first gen laptop to come with the RX 5500M, the Alpha 15, will also come with a 144Hz 1080p IPS display, so there is an expectation for 100FPS+ in some games. 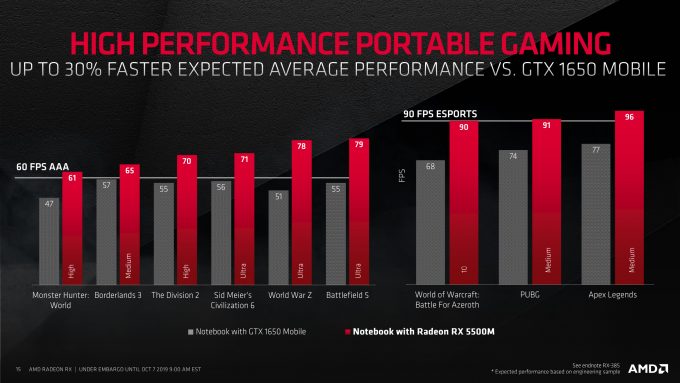 No price or availability has been announced at this time. As stated earlier, this is mostly an SI availability announcement more than anything. AIB partners will likely be fighting for limited availability at least initially, as TSMC continues to expand its deployment of 7nm capabilities with very high demand.

AMD also took the opportunity to remind press about FidelityFX, the OpenGPU effects library for games, including Radeon Image Sharpening being used in games like Borderlands 3. There is also Anti-Lag, which reduces input lag by up to 23%, without interfering with frame rates. There was also the rather lucrative deal that AMD is doing with game bundles, as part of its Raise the Game campaign, offering free copies of Borderlands 3 and Ghost Recon Breakpoint with the purchase of any modern AMD GPU, which we covered in a previous story.