As expected, AMD had quite a bit to talk about at this year’s CES, although not all of it was strictly consumer focused. The company spent a lot of its keynote talking to partners about how AMD’s products are used in their workflows, and what they’re capable of.

To our surprise, both Lewis Hamilton and Toto Wolff of the Mercedes-AMG F1 team came on to talk about the “insane” amount of computer horsepower needed for development of the team’s car and race plans. Hamilton also talked up the PlayStation 5, a console that features both an AMD CPU and GPU under-the-hood, which he says he thoroughly enjoys enough to carry it around on travel. 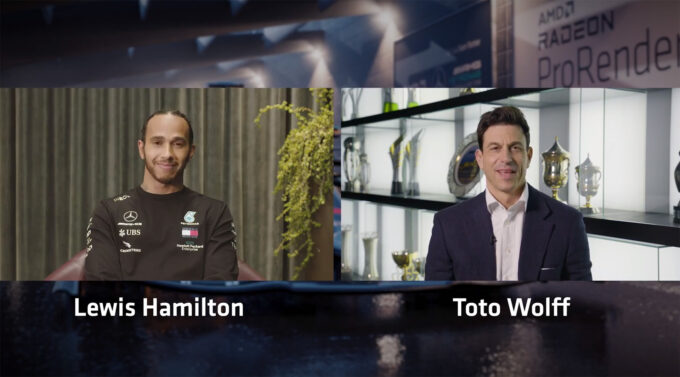 For those hoping to see the release of some new CPUs and GPUs for the desktop, there’s unfortunately nothing to really talk about. CEO Lisa Su did talk at some length about RDNA2’s desktop launch this past fall, but no new products have been announced. Those announcements instead revolved largely around new Zen 3-based mobile CPUs, as well as Zen 3-based EPYC CPUs for data centers. We hoped to hear about Zen 3-based Threadripper, but alas, we’re going to be waiting on that. 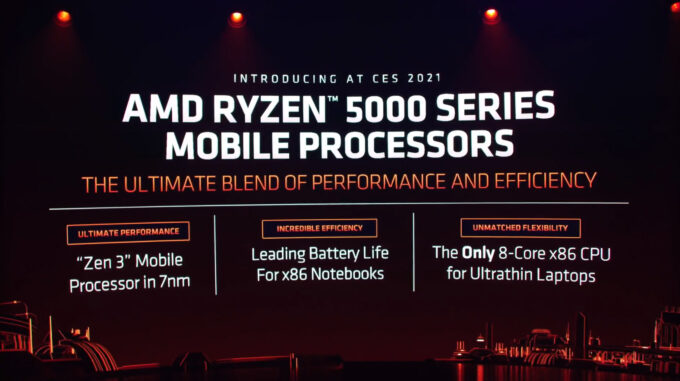 A day after Intel announced its new 10nm quad-core mobile CPUs for ultraportable gaming notebooks, AMD made it a point to say that it’s offering the “only” 8-core x86 CPU for ultrathins, and like the rest of AMD’s current-gen lineup, they are built on a 7nm process. Here’s the full lineup of Ryzen 5000 SKUs announced today:

There’s pretty much something for everyone here. Some may prefer ultra-low power processors, or the fastest one possible. Almost all of the Ryzen 7 and 9 SKUs include 20MB of cache, with the exception being the low-power 5700U, a Zen 2 chip offering 12MB. Speaking of Zen 2, three of these models stick to the older architecture, so if you want the latest and greatest, you’ll want to keep your eyes focused on the others – and away from the lone quad-core. 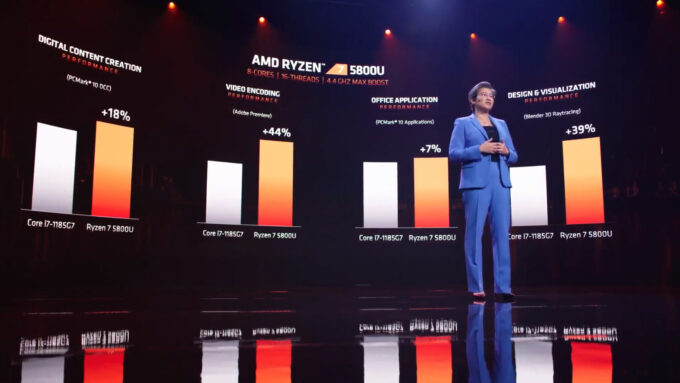 AMD says that the world’s top notebook vendors are on board with this new series, including ASUS, HP, and Lenovo – all of which are expected to release the first models next month. 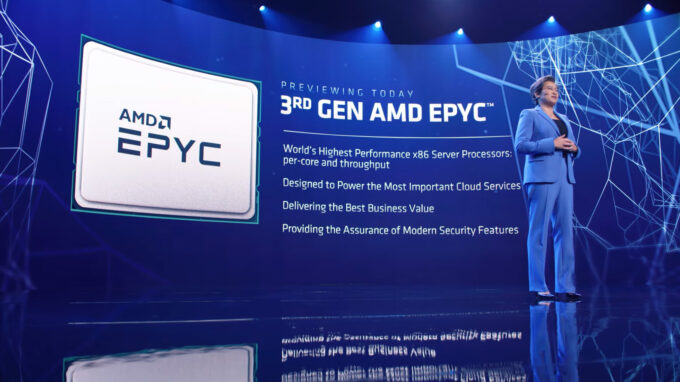 As mentioned before, 3rd-gen EPYC also got a mention. These “Milan” processors are built around Zen 3, so they of course bring forth all of the architecture improvements we saw with the move from Zen 2 to Zen 3 on the desktop – including much-improved single-threaded performance. Even our multi-thread workloads saw notable gains over the previous generation, so the most grueling workloads out there will be able to take great advantage of the latest architecture.

AMD gave an example of a weather forecast model being crunched with two of AMD’s 32-core Milan processors, and vs. a dual-socket top-end Intel Xeon platform, a 68% performance uplift could be seen. What’s interesting about that is that 32-cores is likely not going to be the top-end option on EPYC 3rd-gen, based on what we’ve seen in the past.

AMD says that the next-gen EPYC will be discussed more at some point during Q1, which at the very least would include tentative release dates. On the desktop side, we still look forward to hearing about next-gen Threadripper, as AMD has been pretty quiet on the series as of late!