Last week, AMD ushered in the Ryzen Threadripper PRO generation, catering to those demanding the most powerful (and feature-rich) workstations, with capabilities even exceeding the desktop Threadripper variants. This week, the company follows-up with the launch of some more modest chips, but like those Threadripper PROs, these new chips are also OEM-only. 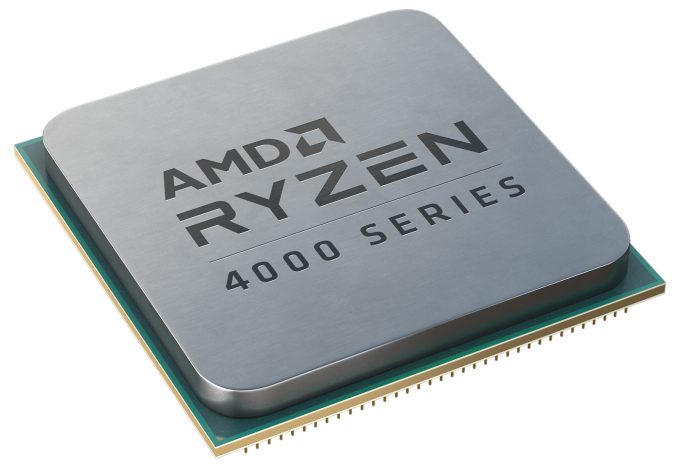 The fact that this is an OEM-only launch should be addressed first, because we know that many of our readers have been anxiously awaiting the launch of these chips. After all, Zen 2 + integrated graphics sounds pretty damn tasty – especially since we’ve already seen people do really cool things with the older models.

Based on what we heard during the briefing for these chips, it seemed obvious that AMD wanted to cater to what’s really a massive market. Chips like these are perfect for vendors to jump on, because it removes the need for a discrete GPU, allowing them to build modest form-factor rigs. A rough estimate was provided that the OEM market is at least five times larger than DIY, so AMD clearly wants to make sure its vendor partners have ample supply.

Ample supply will be important, too, because there are many models of these Renoir chips launching today. We’ve typically seen AMD release just a few for any given APU launch, but there are many (at the bottom) here:

Please note that while the regular Ryzen PRO series is not listed here, we included the brand-new graphics-equipped models here to show how they stack up in the overall lineup. You’ll also notice an addition at the bottom, with Athlon series APUs, which are based on the last-gen Zen architecture. See what we mean about a lot of new model choices? There are even GE complements to each of the new Ryzens that scale clocks down to fit into a 35W power envelope.

AMD says that these new APUs improve the graphics performance up to 60% per compute unit, which is really impressive, and is one of those alluring factoids that will make DIYers really want one. Because the Zen 2 architecture has been upgraded to here, the general performance will see a huge boost in some cases, gen-over-gen. 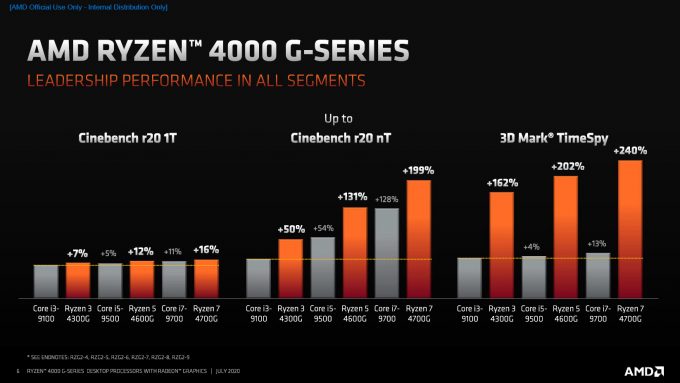 AMD naturally has many performance comparisons to bring about, such as the standard Cinebench and 3DMark Time Spy test results seen above. AMD noted that Intel’s 10th-gen CPUs are elusive on store shelves, so it’s using 9th-gen parts for its comparisons here. Even if we were to see the Intel models bump to 10th-gen, the only place we’d see a noticeable difference would be with the single-thread result. With IGP gaming and multi-thread Cinebench, AMD’s new chips perform very well.

Perhaps an even more interesting set of results is AMD’s own comparisons to the last-gen 3000G chips: 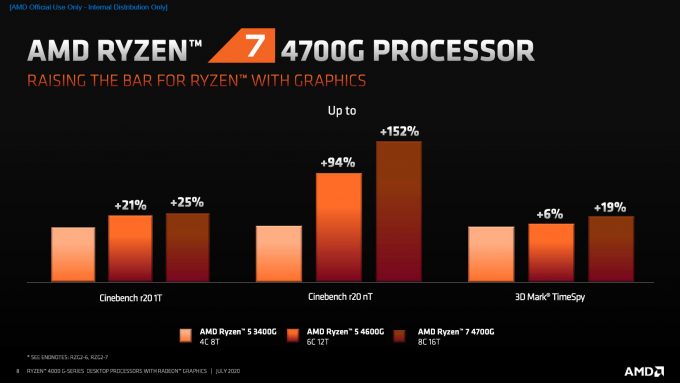 The most impressive result of this bunch is likely the single-thread Cinebench, because a 21% increase there is huge, and important when it comes to system responsiveness. It’s impossible to ignore the monstrous gains seen in the multi-thread test, as well. The GPU score boost is likewise nice to see, but actually not as big of a gain as we were hoping for. +19% is still no joke, however, especially when AMD claims it will still easily beat out Intel’s top-end IGP in games like Rocket League, Dota 2, CS: GO, and GTA V.

As mentioned above, this launch also brings about some new Ryzen PRO 4000 G-series models, catering to the business, and bundling a fleet of security features – like full-system memory encryption. 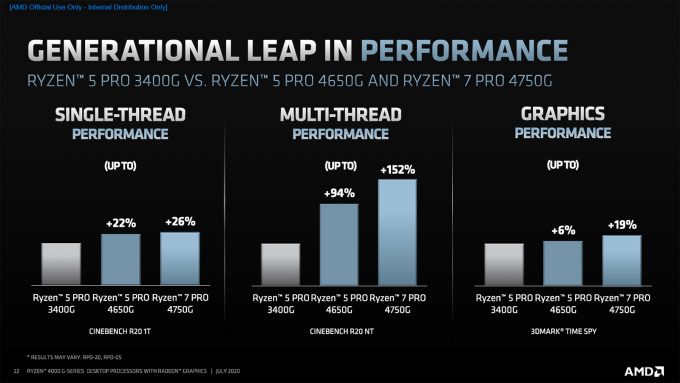 When comparing to the last-gen Ryzen PRO parts, there’s no doubt that these new chips are a major step forward. Again, we’re seeing nicely augmented single-threaded performance, dramatically improved multi-thread performance, and a nice boost to graphics. Compared to the previous generation, AMD claims that its new 4650G can perform about 20% better in Microsoft applications, peaking at 53% with Excel. Knowing all of the improvements made in these new chips, none of that would surprise us.

While it’s unfortunate that the DIY crowd is skipped over for this launch, AMD made it clear that there are APUs en route for those users, but likely, they will not carry over the verbatim naming of these newly-launched chips. We can’t wait to eventually test one, but how long that wait will be, we’re not sure.