Until we caught the rumor last week that AMD would be releasing a Ryzen Threadripper Pro series, we didn’t really expect to see anything Threadripper-related new this year. As we learn today, the rumor from last week was pretty spot-on, although there are still some surprises.

Threadripper has always been about giving the user as much CPU horsepower as possible to get big jobs done fast (or more accurately, quicker). When AMD released the mammoth 64-core Ryzen Threadripper 3990X, that to us felt like a fairly proper workstation part – aside perhaps from the 256GB memory limit. Well, that limit is one of the reasons this “Pro” extension has come into play. 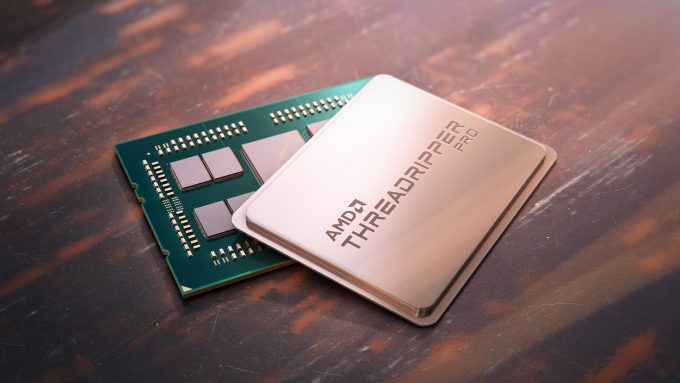 There are sure to be plenty of questions, so let’s square those away. These chips are not compatible with current TRX40 motherboards used for regular Ryzen Threadripper. These Pro models feature eight-channel memory support, so while the sockets are similar, the circuitry is not. A Threadripper Pro will not boot in a TRX40, and Threadripper will not boot in the new TRX80.

Who is Threadripper Pro for, then? It’s effectively for anyone who yearns for the most powerful, most stable workstation possible. For these machines, ECC memory will be a standard (UDIMM, RDIMM, and LRDIMM are supported,) not just a luxury, and so stability is obviously the name of the game here. AMD is specifically targeting the most power-hungry industries with this platform, with media and entertainment, design and manufacturing, and sciences all in its sights. In its briefing, AMD talked about Adobe After Effects and Premiere Pro (check out our recent performance look) on the M&E side, KeyShot for rendering (ditto), and even Unreal Engine and compilation work (compile results here).

As alluded to earlier, the 256GB maximum memory limitation on Threadripper is bumped significantly to 2TB on the Pro models, which even includes the comparatively cute 3945WX, with its 12 cores and 24 threads. Since the third-gen enthusiast Threadripper series didn’t even include a 16-core, it’s neat to see both 12- and 16-core options available here. Access to eight-channel memory on those smaller models could be attractive to those needing bandwidth more than raw CPU compute. 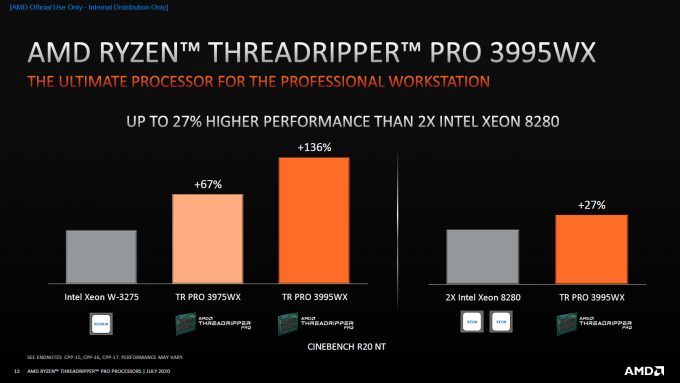 As you’d expect, AMD has plenty of comparisons against Intel platforms, touting its horn that it takes just one particular AMD CPU to beat out two Intels. On the top-end, AMD compares its 3995WX to dual Xeon Platinum 8280, a configuration that would still lead to AMD having a few more cores. With PCIe 4.0 in tow on these Threadripper Pros, those with huge I/O needs will be especially drawn to this new workstation platform. This is further reinforced by the inclusion of 128 PCIe lanes, rather than 64 on the non-Pro Threadrippers. This effectively makes the Threadripper Pros single-socket versions of the EPYC server CPUs. Much like the EPYC CPUs, Threadripper Pros can not be overclocked.

The Ryzen Threadripper Pro series is so far going to be a OEM/SI-exclusive, and out-of-the-gate, Lenovo announced it will be using its Thinkstation P620 to show off AMD’s latest and greatest. We expect it won’t be long before others follow suit, especially since these parts are not going to be available to DIY consumers any time soon. We expect to see availability of these CPUs some time Fall this year, and since these are OEM products, no pricing has been given either.