Since the pandemic has done a great job of skewing our perception of time, have you realized that it’s been nearly two full years since the launch of enthusiast/workstation grade processors? The previous launch came with AMD’s first-gen Threadripper PRO, built around its Zen 2 architecture. Intel’s most recent Core X-series processors were released over two years ago, in Q4 2019. Why things have been this quiet can be left to speculation, but AMD wants to break the silence today with some more Threadripper love.

First, some context. To date, AMD has offered its mainstream desktop series Ryzen, as well as Ryzen Threadripper, for high-end desktop or workstation users. The biggest perk of Threadripper was its many available cores, as well as a bolstering of memory bandwidth, thanks to a quad-channel controller. Then comes Threadripper PRO, a series that effectively becomes the EPYC for workstations, sporting more advanced features, and notably, an eight-channel memory controller.

Today, AMD is announcing the effective second generation of its Threadripper PRO series, with CPUs built around the company’s current Zen 3 architecture. This announcement is one we’ve heard people clamoring for, for a while, so we’re glad to see it finally land. 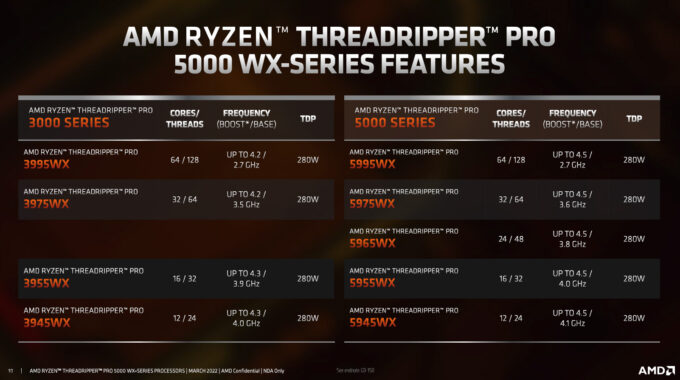 This new Threadripper PRO series one-ups the previous one by offering a fifth SKU, catering to those wanting a 24-core option. Across the board, all of the chips retain their 280W TDP, but manage to bump the boost clock speeds to at least 200MHz better than the previous generation. Another perk comes by way of an efficiency improvement, moving from 4-core clusters having access to 16MB of cache, to 8-core clusters having access to 32MB cache. The total amount of cache remains the same as before, at 256MB.

We must highlight the fact that the mere moving from Zen 2 to Zen 3 is huge in itself. Zen 2 was an efficient, and very fast architecture, but Zen 3 enjoyed lots of polish, which especially improved inner-core transfers and cache sharing. If Zen 2 had any known “gotchas”, Zen 3 pretty much evaporated them.

If it’s not obvious enough, Threadripper PRO is designed for users who demand the absolute top of the pops in terms of capability from a single workstation. Many industries can benefit from platforms with many CPU cores, especially those related to design, especially AI-aided design. Such high-end platforms can become a boon for architecture and science, especially when paired with high-end GPUs. 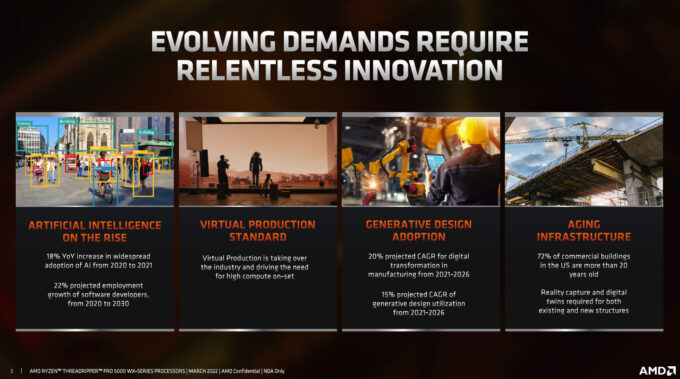 As you’d expect, AMD has many comparisons between its latest Threadripper PRO series, and Intel’s current Xeon W-series, one also focused on workstation users: 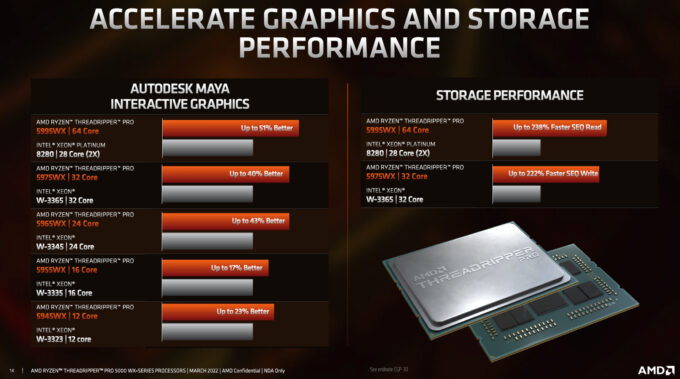 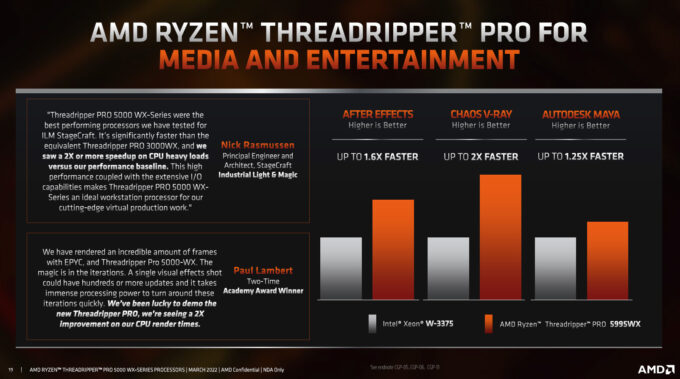 AMD provided many performance comparisons; a couple of which we’ve provided above. The company also talks of seemingly simpler scenarios like software compilation, highlighting the wide-range of workloads that having many CPU cores can accelerate. While scientific research would be ideal on such a platform, M&E users can greatly benefit from all of the extra power, as well.

While we haven’t personally tested Intel’s Xeon W-series, or AMD’s latest Threadripper PRO, the performance above seems believable based on all of our previous testing of similar platforms. To date, Intel hasn’t been able to fully catch up to AMD on the core count front, but perhaps that will happen with the next generation. That said, not everyone needs 64-core processors, but having such an option is a good reason for AMD to gloat a little bit. 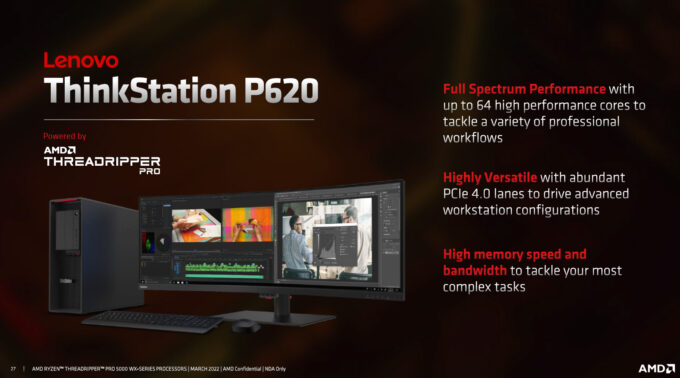 As before, this Threadripper PRO series is launching exclusively with Lenovo, in its P620 system. At quick glance, the Lenovo website is reflecting the previous generation Threadripper PRO processors, so you’ll have to keep an eye out for the refresh to hit, if you’re interested in jumping on board.

Overall, we’re excited to see this latest Threadripper PRO launch, as it’s felt like it’s been a long time coming. Similarly, we hope that AMD isn’t planning to give up on the regular Threadripper series, as we feel it still nicely caters to the high-end niche, while keeping to a lower price point. On that note, Intel hasn’t released any new Core X-series parts since Q4 2019, so it truly feels like we’re due for an update there.

That all said, there are rumors floating about that normal desktop rigs will be soon graced by new CPUs, as well, so maybe the next two years will be much less quiet than the previous two have been.