AMD has just released the first Radeon Pro Software for Enterprise driver of 2021, and as it happens, it packs a nice punch. After installing this new driver, Radeon Pro users will immediately notice that the entire Radeon Software interface has been overhauled, now aligning with the latest update that launched on the gaming side two years ago.

Up until this point, the Radeon Pro driver installed a control panel similar to the one AMD introduced for gaming back in 2015, and while it itself was a lot better than what came before it, the latest update represents a lot of great polish, and not to mention new features. 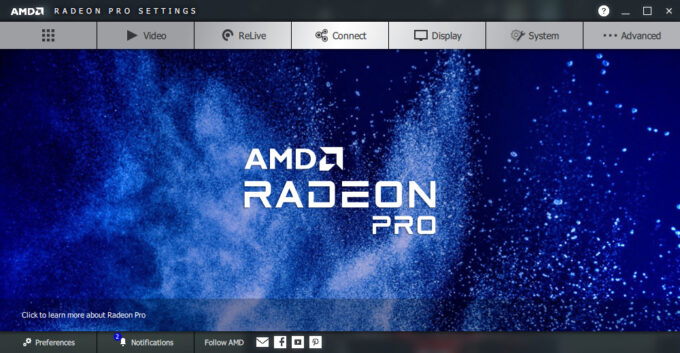 Once the new Radeon Software is opened, the main page will greet you. From here, you can launch a recently-used application, monitor for driver updates, or take advantage of screenshot and video options. This launch screen may look pretty simple at first, but there is a ton of functionality to take advantage of once you move into the submenus. For example, if you click the little gear next to the Media & Capture box, you’ll be brought to an advanced settings page for all things capturing.

While most software can likely be used in their default states, as the driver will apply useful defaults to begin with, you may want to hit up the Create tab to fine-tune settings on a per-application basis. In the second shot in the slider above, you can see advanced settings for Autodesk Maya, such as Vsync, FreeSync, or anti-aliasing.

If you click the “Tune Application Performance” button on the same Create page, you will be brought to a simple fan control interface. AMD doesn’t support overclocking on its Radeon Pro cards, so there are no options for adjusting clocks or voltages like there are in the gaming version of Radeon Software.

Streaming may not be commonly associated with creators like it is with gamers, but whether you want to livestream or publish to your Twitch or YouTube channel, AMD gives plenty of options to take advantage of. Within the Streaming tab, you can associate your favorite service, with Facebook, Restream, STAGE TEN, Twitch, and YouTube all natively supported. That even includes the ability to use the chat from within the Radeon Software interface.

UI aside, AMD also bundles some performance improvements into this release, with particular boosts being seen with the CATIA test in SPECviewperf 2020. AMD claims an up to 45% performance boost with that test over the previous driver, so we’re hopeful that boost likewise carries over to the real CATIA software just the same.

If you think your body is ready to handle the excitement of a refreshed UI, you can go here to grab the new driver. If you need more convincing, you can read through AMD’s take on 21.Q1 first.