The past few SIGGRAPH conferences have seen the launch of some new hardware from AMD and NVIDIA, with AMD’s Radeon Pro series having been announced there a few years ago, and both the Radeon Pro WX 8200 and NVIDIA’s Quadro RTX launched last year – which happened to come soon after our interview with ray tracing legend Turner Whitted. Remember NVIDIA’s DGX Station? That was announced at SIGGRAPH in between those two. So it’s a bit unfortunate, then, that neither of the companies decided to unveil some new hardware at SIGGRAPH this year, but… both companies seem to have killed it in software announcements.

At this year’s SIGGRAPH, AMD’s focus revolves hugely around ProRender updates, of which there are many. At last year’s conference, ProRender was integrated into Cinema 4D, which was quite a big win overall. But this year, the company can boast about five integrations in total, with Modo, InstaLOD, Edificius, and Z-Emotion all adopting it. In addition, new versions of the ProRender plugin are available for Blender (2.80!) and Maya, with additional updates to come soon. 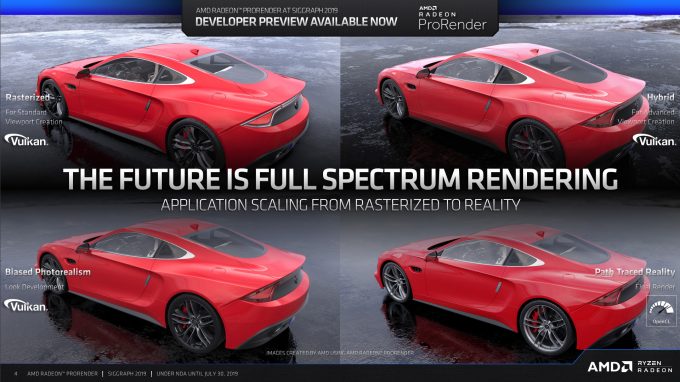 AMD is also offering a ProRender SDK update for developers, allowing its users to take advantage of its new “Full Spectrum Rendering” capabilities. Depending on the current task, renders can happen one of four different ways: Rasterized, Hybrid, biased Look Development, and unbiased Path Traced. The first two are ideal for working inside of the viewport, while Look Development will provide a quick(er) render preview, and Path Traced should deliver the most accurate, cleanest end result.

In addition to Full Spectrum Rendering, AMD has also deployed updates to its Image Filter libraries, adding Windows support through Microsoft DirectML, and Linux support through the company’s own MIOpen, enabling AI upscaling that benefits from the fruits of machine-learning. 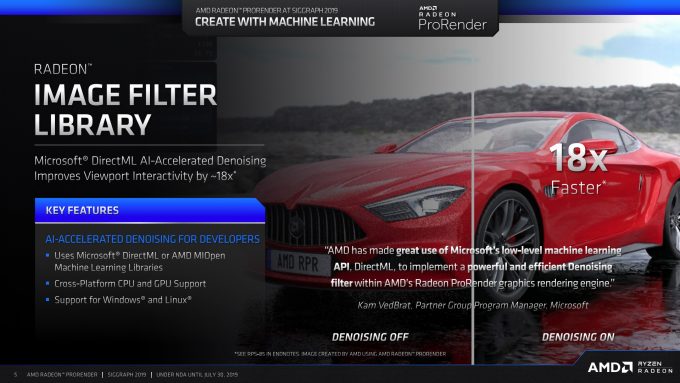 Other notable updates include A.L.I. Technologies offering cloud services to ProRender users, and upgrades to the support of Pixar’s USD, such as by offering path tracing to applications supporting a USD viewport. 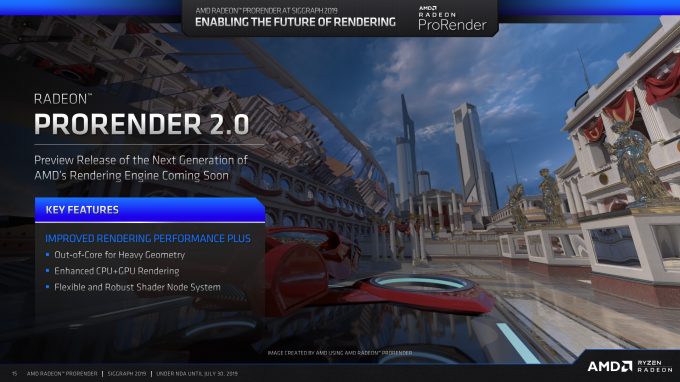 As if all of this news wasn’t enough, AMD has also decided to tease the upcoming ProRender 2.0, which will have a huge focus on heterogeneous improvements, and add out-of-core rendering for heavy geometry. Other features planned for the future include light baking, a thin film shader, and built-in cloud rendering support. Fortunately for those anxious for new features sooner, the next big ProRender release will include a preview of 2.0, as well as the production release of Full Spectrum rendering.

You can head over to AMD’s ProRender downloads page to snag the latest version of the plugin for your software suite of choice. Note that Blender and Maya reflect the most up-to-date ProRender. Updates for all of the other suites should come soon.