This year’s CES has had the usual onslaught of product announcements, but it feels like the CPU market has been catered to more this go-around than in previous events. We wrote the other day of Intel’s new CPU launches, with an almost ridiculous number of SKUs targeting both desktop and notebook. Now, AMD wants to show off its goods, with a handful of new models also for both desktop and notebook.

Up until this point, AMD has offered just four Ryzen 7000 models for desktop, a number which changes to ten following the CES announcement. While everyone and their dog who watches the CPU market expected AMD to debut a 3D V-Cache-infused Zen 4 chip at this year’s CES, the company managed to catch everyone off-guard by instead announcing three of them. That includes the new top-end Ryzen 9 7950X3D: 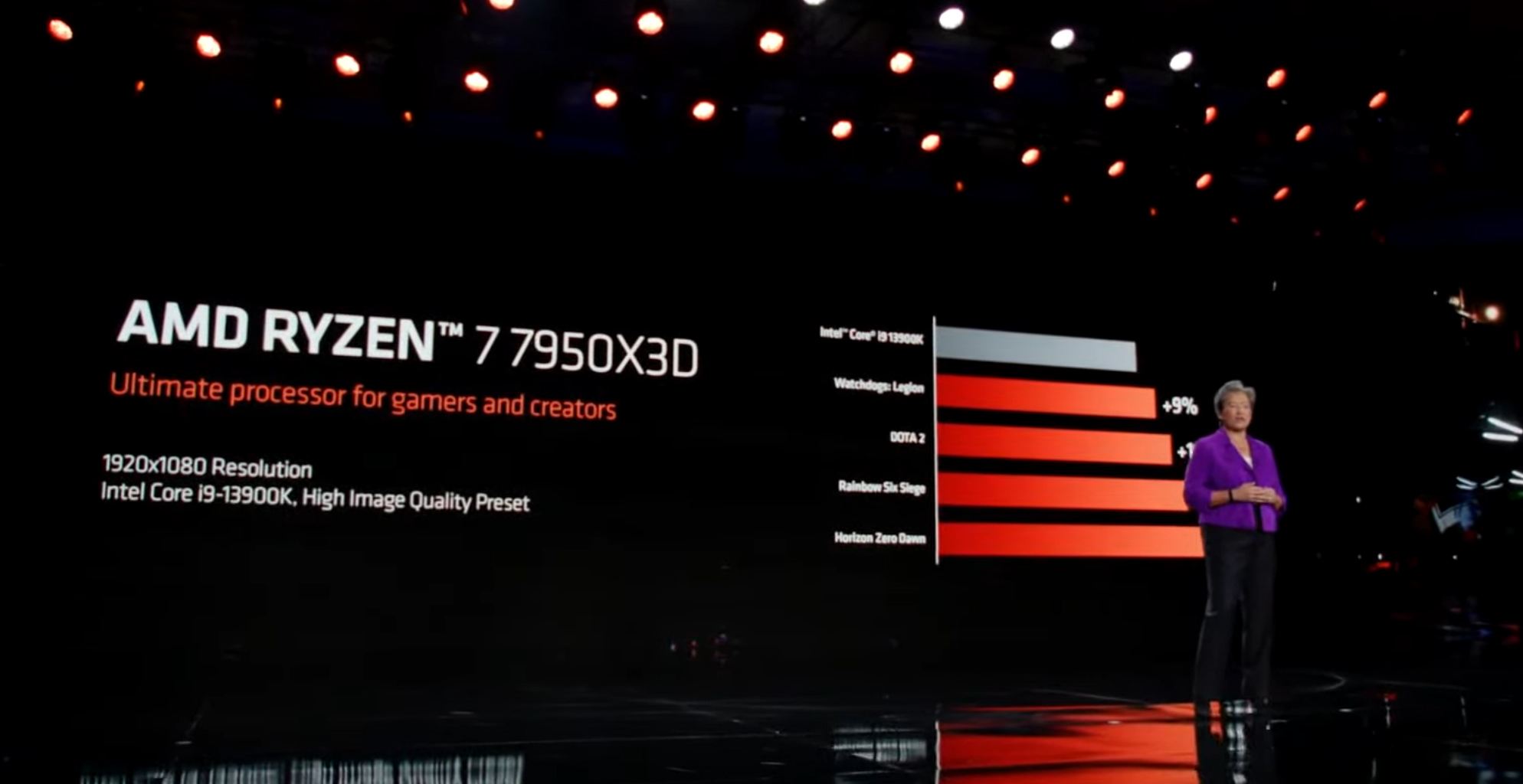 In the previous generation, only the eight-core Ryzen 7 5800X3D came equipped with the stacked cache, leaving many to hope that higher-end versions would come. It was widely believed that AMD stuck to the single model because an eight-core chip has just one CCD, and it’s easier to double the cache for one CCD than multiple. So… what’s changed?

Well, it might sound odd, but both the 7900X3D and 7950X3D will give only one of their two CCDs the extra cache, leaving the second CCD to run at even higher clocks in the background. If this design sounds like trouble in the making, especially considering how rough threading has been for AMD CPUs in recent Windows versions, it kind of does. Thankfully, though, AMD says that it’s working with Microsoft to ensure this unusual architecture design is properly supported in Windows.

While the new 3D V-Cache models arguably stole AMD’s desktop CPU show, the company’s added additional non-X models to slide in alongside the others. Those include SKUs that revolve around a 65W TDP, making them ideal for those looking to build smaller form-factor PCs, or those who simply want a cooler-running CPU to begin with.

As of this CES, here’s AMD’s current-gen Ryzen lineup, with previous-gen models left in tact for easier comparisons:

As we saw with the 5800X3D in the last generation, opting for a 3D V-Cache-infused model means that clock speeds will be sacrificed in certain areas. Both the 7900X3D and 7950X3D retain their respective boost clock speeds, but the base clock speed drops 300MHz. The 7800X3D sees an even bigger drop vs. the 7700X, of 400MHz. AMD’s website doesn’t list the base clock for this particular model, for some reason.

While the new 65W parts may not seem as exciting as those enhanced with 3D V-Cache, those lower-power models do have an extra treat: an included CPU cooler. Both the 7700 and 7900 include a Wraith Prism, while the 7600 includes the Wraith Stealth.

Another thing worth noting is that this entire collection of Zen 4-based CPUs includes a built-in GPU, so if you want to buy a CPU now but save a discrete GPU purchase for later, you can.

On the notebook side of the market, AMD debuted a handful of new mobile CPUs that fall under the 7045HX branding. These SKUs begin with the Ryzen 5 7645HX delivering six cores and twelve threads, and go up to the flagship Ryzen 9 7945HX, which sports 16 cores and 32 threads – just like the flagship desktop Ryzen. All four SKUs can peak at 5GHz, with the Ryzen 9 variants both doubling the effective cache over the smaller models. 80MB of cache in a flagship mobile CPU is pretty cool to see, we must admit.

As Intel only just released its 13th-gen mobile CPUs, it will hopefully not be too long before we see more up-to-date comparisons – especially since the 13900HX doubles the number of efficient cores.

It’s also worth noting that these new mobile SKUs bring forth a brand-new feature: Ryzen AI. This is dedicated AI hardware found in the CPU, which AMD says improves performance for real-time AI tasks. In comparing against Apple’s M2, AMD says its new AI hardware is 20% faster, and 50% more power efficient – the latter being quite a bold statement.

For ultrathin notebooks, AMD has also announced the 7040HS series, featuring three SKUs. The Ryzen 9 7940HS and Ryzen 7 7840HS have the same core and cache counts, with the 9-series chip clocked just a bit faster. The Ryzen 5 7640HS includes six cores, and still manages to peak at 5GHz.

Overall, this year’s CES hasn’t proven just great for desktop CPUs, but notebook, as well. Hopefully it will not take too long for both AMD’s and Intel’s new models to trickle out to the market.