As soon as DDR3 hit the mainstream market in 2008, the appeal of fast RAM kits seemed to disappear almost instantly, and it was this point that I stopped reviewing individual kits due to the apparent lack of need or interest. When DDR3 kits are as fast as they are, the fastest kits out there become a niche product, and given the current pricing, non-overclockers don’t need reviews to figure out what kind of kit to pick up.

This all became even more evident when we began to see OCZ noticeably shift focus away from memory products, RAM in particular, and inevitably discontinue its entire product-line earlier this year. At this point in time, it’d be hard to imagine another company joining the other RAM vendors out there, but it’s happened, and the company is AMD.

Yes, AMD as in Advanced Micro Devices. The products at this point in time seem to be minimal in quantity, with AMD listing just three different kits on its website. Of these, all three consist of 2GB modules, and where performance is concerned, there’s little to be excited over. 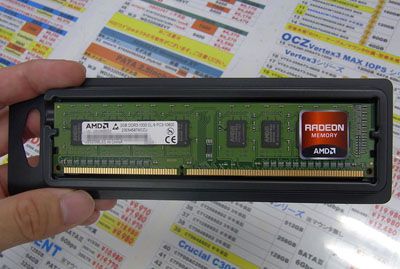 The “Entertainment” kit runs at DDR3-1333 and features 9-9-9 timings – timings that are more common on DDR3-1600 and higher kits elsewhere. The “ULTRAPRO Gaming” kit bumps the speed up to DDR3-1600, but offers timings of 11-11-11. Timings like those are almost unheard of, with even the highest frequency kits on the market sporting a max of CAS 10.

According to Japanese tech site PC Watch, the modules are already available for sale in Japan, which takes away my guess that these were to be OEM parts only. It’s still unclear if they will become available for sale in North America, but in truth, it shouldn’t matter to most people. While AMD will claim that these modules will suit its APUs well, the specs couldn’t be more boring, and most kits that people purchase off of a site like Newegg even without looking at the specs will be faster than these, or at least have tighter timings.

Judging by the picture, it also appears that AMD produces the DRAM itself, though it could also be that it’s been sourced from somewhere else and then branded by AMD (a rather rare occurrence where memory chips are concerned).