When AMD released its HD 6000 series of graphics cards this past fall, the rumor-mill went wild and led everyone to believe that thanks to the good IGP solutions from Intel, and AMD’s upcoming Llano APUs, we wouldn’t see another entry-level GPU from either AMD or NVIDIA. But, it looks like we were all proven wrong, thanks to the release of the Radeon HD 6450.

First launched in early February as an OEM-only part, it seems that AMD decided to fill in the lowest-end gap with the same solution while we all wait to see what Llano is made of. It doesn’t seem to be some typical lacklustre ~$50 GPU, either, as AMD boasts being able to run most games just fine at 1600×900, including the recently-launched Total War: SHOGUN 2. That’s quite a step up from the 1280×1024 resolution that we might see on Intel’s IGPs.

Why choose a card like the HD 6450 over an IGP? Pretty much, it’s all about the gaming. On Intel’s IGPs, unfortunately, many games don’t work as well as they could, and in essence are not all too compatible. Things are certainly getting better, but it’s tough to beat either AMD or NVIDIA in the gaming department thanks to their many years of experience.

AMD touts that video performance and quality is also improved on its GPUs, though. According to its internal tests, while the Intel HD 2000 IGP scores 160 in the HD HQV test, the HD 6450 scores 188. For those who care a lot about film quality, these higher numbers may prove important. 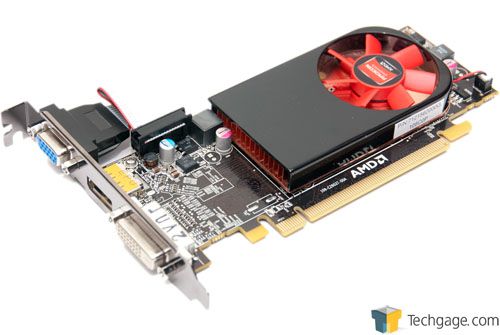 Believe it or not, despite being a cheap offering, the HD 6450 fully supports AMD’s Eyefinity technology. The sample we received includes a VGA, DVI and also DP port, and each of these can be used to power 3 displays, and given the use of a VGA connection, it’d be safe to say the typical resolution across those three displays wouldn’t exceed 1920×1080 or 1920×1200 if you want them to be matching.

While the main version of the card will feature VGA/DVI/DP, another version will be available that offers both DVI and HDMI. That card won’t support 3×1 Eyefinity, but would allow HTPC enthusiasts who don’t have a DP display to still take advantage of what the HD 6450 offers.

At $55, the HD 6450 looks to be an amazing upgrade from an IGP solution, but with Llano right around the corner, are people going to jump on board? It’s not a bad stop-gap measure, but some might still choose to wait for AMD’s upcoming big release (due by the late fall to hit stores). Due to an overwhelming schedule, I’ve been unable to tackle this card up to this point, and am unsure when I’ll be able to. It’ll be lingering around here to remind me, and I’ll tackle it if able. If anyone out there has any desire to see us post a review sooner than later, speak up!