The moment many PC gaming fans have been waiting for has arrived: AMD has just released the first iteration of Super Resolution, the latest feature to join others under the FidelityFX umbrella. When FSR was first announced a few weeks ago, it wasn’t immediately clear if anyone outside of AMD would actually be able to take advantage of it at its June 22nd launch, but sure enough, we all can.

Today, AMD greets the launch of FSR with support for seven titles: Anno 1800, Evil Genius 2, Godfall, Kingshunt, 22 Racing Series, Terminator: Resistance, and The Riftbreaker. In the future, Far Cry 6, Resident Evil: Village, Forspoken, Myst, Dota 2, and Necromunda: Hired Gun are a few other games that will soon gain support, with more planned later in the year. 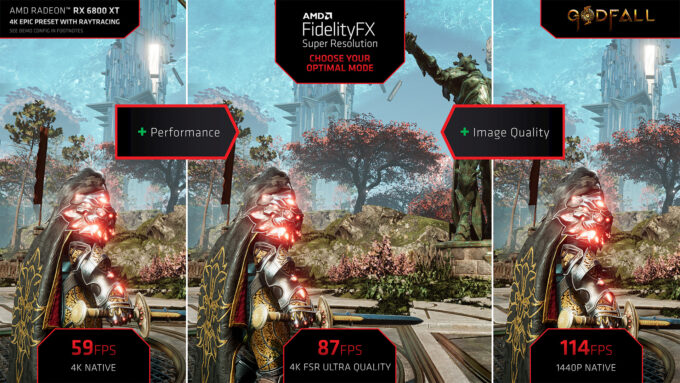 Both NVIDIA’s DLSS and AMD’s FSR go about their upscaling duties in different ways, with the green team taking advantage of the RTX series’ dedicated Tensor cores and deep-learning, and team red going the the spatial upscaling route that’s supported on a wider-range of GPUs. AMD has noted before that even NVIDIA GPUs are supported, as far back as Pascal, as well as its own Radeons, going back as far as Polaris. While it’s not guaranteed, you may possibly see the feature usable on even older hardware, as well.

Like DLSS, FSR works by rendering a lower resolution version of a game and upscaling it to mimic as close to a native resolution as possible. This can sometimes lead to some graphical anomalies, but based on comments around the web so far, it seems like most who’ve already tested it have been pretty impressed. We’d suggest checking out Gamers Nexus‘s video below for a good deep-dive.

Because FSR is driver agnostic, companies like NVIDIA and Intel don’t need to do anything special with their drivers to take advantage of the feature, although we’re sure they could still optimize performance further if they wanted to. Like DLSS, FSR has to be plugged into a game, but any game that already supports FidelityFX would likely have the easiest time of having it added. Again, like DLSS, AMD wants to make sure FSR is readily available in the most popular game engines, easing development hassles. 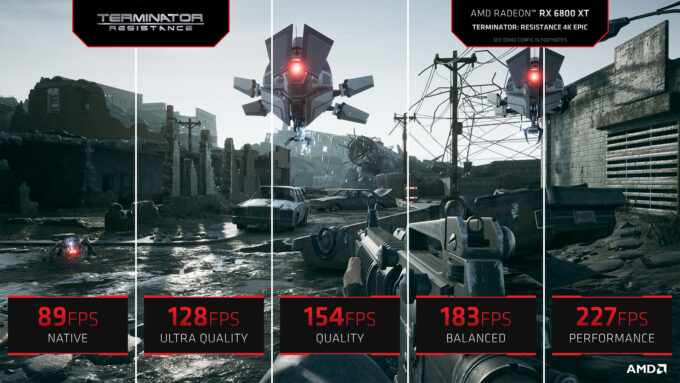 According to the FSR reviewer guide, AMD suggests that gamers could expect up to a 2.4x improvement to performance at 4K, while using the FSR Performance option. Currently, that doesn’t seem like a fault-free mode, in that you will notice some obvious anomalies, but those dwindle as you increase the quality level. Most important to note, though, is that even at the highest FSR level, you’re going to be gaining in performance, so if you have the option to use it, it seems like a no-brainer, even if it can’t directly compete with DLSS’ top-end settings quite yet.

Some reviewers so far have said FSR’s current release is better than DLSS 1.0, which seems fair based on what we’ve seen. What we hope that means is that FSR will continue to improve in the same way DLSS did, which managed to turn naysayers into believers with its 2.X release.

Overall, we’re both surprised that FSR has supported games available today, and are really stoked that there’s an initial answer to NVIDIA’s DLSS. Some don’t like to see the two compared directly, but realistically, when they both attempt to achieve the same end goal, they are comparable enough. With FSR being open source, we may just see its development accelerated, thanks to more eyeballs pursuing the code. In the end, FSR’s release and open source nature is a standout move by AMD.