Right on schedule, the Blender Foundation has released the latest major version of its popular open-source 3D design toolkit, 2.90. This is the first release since the launch of the 2.83 LTS, and naturally won’t replace that LTS, but instead sit alongside it. Users who want Blender to remain as close to the same as possible for the long-run would do well to stick with 2.83, while those willing to explore new features quicker should adopt 2.90. Of course, you can always run two versions side-by-side if you want to compare.

Blender’s UI is one aspect of the software that gets a lot of polish over time, even if some of that polish is super-subtle. The end goal is to make Blender easy-to-use, and look good. More than anything, flexibility is crucial, and Blender has always been great with that. With 2.90, minor improvements will make it even easier to use, such as with the ability to hide or show memory usage near the version number in the bottom-right corner, enabling a statistics overlay in the viewport, or moving modifier menu items around to better suit your workflow.

With the 2.90 version of the Cycles renderer, Blender adopts the use of Intel’s Embree ray tracing kernels, which should prove to be a boon for scenes with heavy motion blur. One such scene is Agent 327, which Blender developers have seen improve a render time from 54 minutes down to 5 – with less memory used in the end. Here’s some other comparison data, straight from the developers:

It’s nice to see up-front that performance won’t be improved in all cases, but where there is a drop in performance, it’s minor at worst. Meanwhile, scenes that use motion blur stand to gain handsomely. In other Cycles augmentations, NVIDIA OptiX support has officially been added for 700, 800, 900, and 1000-series cards, although you will obviously see the best performance on RTX cards, thanks to their inclusion of RT and Tensor cores.

If you’re running a really high-end workstation, you may be happy to know that NVLink support has also been added, for both CUDA and OptiX. This allows someone to effectively pool the memory from two NVLink-supported GPUs together, so that they can act as one monolithic framebuffer. As for some bad, but expected news, macOS support for CUDA has effectively gone the way of the dodo, thanks entirely to the fact that Apple decided that its customers shouldn’t have access to one of the best-supported and most feature-rich APIs going.

Also worth noting is the fact that denoising in the viewport has expanded to include the use of the CPU, should an NVIDIA OptiX graphics card not be present. The tech behind this is Intel once again, with its OpenImageDenoise framework. For those interested, we last benchmarked both Embree and OID this past spring with the launch of the 64-core Ryzen Threadripper 3990X. 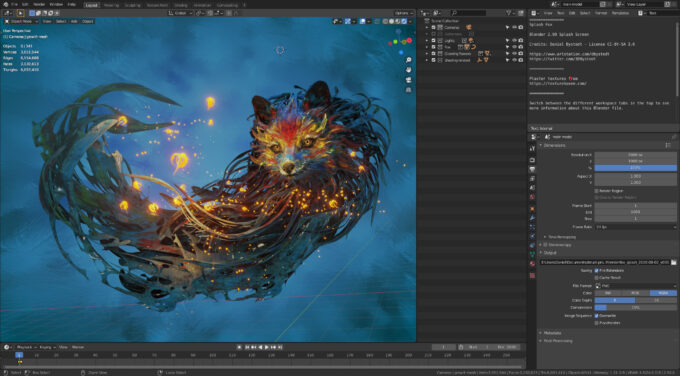 Eevee hasn’t seen quite as much polish as Cycles, but it too adds improvements to motion blur, both with regards to performance and implementation, as its motion blur implementation been rebuilt from the ground up.

As we did with 2.83, we plan to dive into testing 2.90 as soon as we can, and get some fresh performance numbers to you for the current CPU and GPU stacks. If you are freshly topped up on your coffee or other beverage, you can read a lot more about what’s new at the official release notes page.