The Blender Foundation has just released the latest stable version of its popular free and open-source design software. As we’ve come to expect with new Blender releases, there are quite a few additions and notable improvements to be found within the new 2.92. Perhaps the most intriguing new feature of the bunch is a new Geometry Nodes editor, which allows you to create and tweak geometry to create really useful (or cool) designs faster than ever.

The first iteration of the Geometry Nodes editor has a focus on object scattering and instancing. A number of demo files can be checked out, with one representing creating pebbles with the new tool, and a really cool cubic whirlpool animation (seen above). Once you open any of these projects, you can play with the various node options and understand quickly just how powerful the feature is.

Blender has been improving its sculpting capabilities for a while; the latest version takes things further by adding smear and pinch options to mold, and a new silhouette grab ability that will mask vertices based on the normal and grab delta, and when used on thin meshes, you can grab from one side of an object without impacting the other. This all comes in addition to an elastic deformation option being added to the Snake Hook tool. 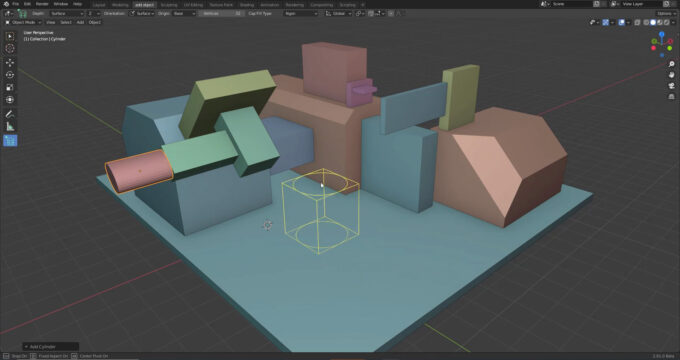 Another great 2.92 feature worth mentioning is the add primitive tool, which allows you to create primitives quickly – click and draw a box, move your mouse in a direction to grow it, and click again to place. You can easily build properly-affixed primitives on top of each other, as seen in the shot above.

Also worth noting with 2.92 is that NVIDIA’s OptiX API now supports ambient occlusion and bevel. More than ever, if you’re an NVIDIA user who hasn’t moved from CUDA to OptIX, you should give it a go. In our tests, even a GTX 1660 Ti can see a performance benefit with OptiX over CUDA, despite not having dedicated ray tracing cores.

You can read even more of what’s new on the official release page, or just skip to the download page. As we’ve done before, we’re going to be taking a look at performance in Blender 2.92 soon, and for the first time will include a Linux focus in the same article. We’ll be delivering this in the days ahead, so stay tuned.