In advance of the CPU launches from AMD and Intel set to happen over the next month or two, we’ve been updating and augmenting our respective test suite. Some preexisting tests like Premiere Pro and Corona Renderer have been bolstered, while some other new tests are being added – one of those being Adobe Lightroom.

To say we’re “adding” Lightroom to our suite would be a little misleading, though, since we’ve been testing the software since its first release, and only stopped testing with it a couple of years ago because the way it was threaded wouldn’t give us truly useful results (it was not scaling as expected). We actually have that issue with another competing solution right now, but we need to investigate more before reaching conclusions. 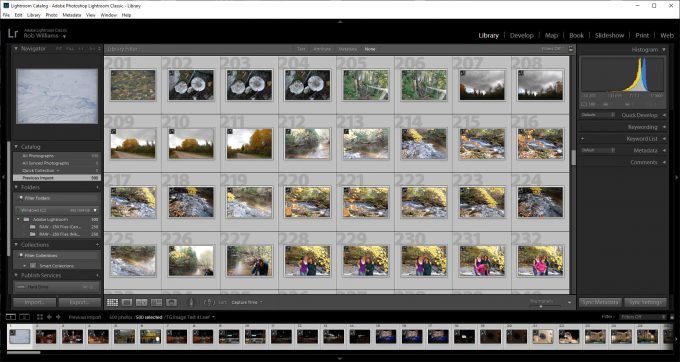 There was once a time when Lightroom wouldn’t use more than a couple of cores, but back with version 7.X, one of the point releases ushered in some major performance improvements, though we still held off on adding the software back in because we didn’t expect it to scale that well. Multiple recent requests from readers made us want to get it added back in now, and we’re glad they asked, since the results are surprising.

Similar to before, our test involves exporting 250 Nikon and 250 Canon RAW photos. There are variances with the resolutions throughout, since multiple cameras of each type were used, but the average is around 12 megapixel. We export using the default file output of JPG, but change quality to 90, and add a 1600x resize as well as a matte sharpen. We tested output with 8- and 16-bit TIFF, but performance was identical to JPG.

Compared to before, Lightroom seems to scale pretty good nowadays. When you export photos, you’ll see 100% of the CPU used, rather than just a partial amount of each core. With the latest Capture One from Phase One, for example, each core hovers around 40%, and the results prove that it could be more efficient (more on that another day). Here are our initial LR results: 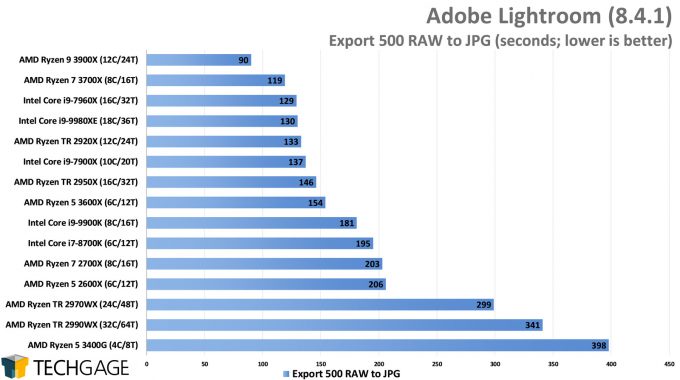 There are a number of takeaways here. The most obvious, and probably most important, is that AMD’s new Zen 2 processors have a clear advantage in this workload. We can’t help but feel like the sheer amount of cache AMD packed into these chips has helped dramatically here. The 3900X doesn’t have an ideal comparison, but the 3700X can be directly compared to the last-gen 2700X. Despite the minor clock speed differences, the 3700X turned a 203 second result into a 119 second one. That is downright impressive.

Another angle is that the 3900X leaps ahead of the equally 12-core Threadripper 2920X. At the same time, the Intel 9980XE does not place where we think it should, based on what we’ve seen in the past – but, all sensitive models were reinstalled a second time for sanity checking (inc. 9980XE). The gains seen on each Zen 2 chip kill off the idea that his is a fluke.

If AMD’s 3900X dominates this workload, we have to hope that the scaling continues once the 3950X arrives, and even more so: the third-gen Threadripper. Threadripper in particular had a rough go in this chart, and anyone who’s followed our coverage of those chips already, are likely unsurprised by the results. For those not familiar, it comes down to the odd memory management.

Given the updated architecture and package design of Zen 2, it could be that third-gen Threadripper will truly get rid of the issues the previous generation products have been prone to. We sure hope that’s the case, given what we’re seeing from the more “modest” Zen 2 chips here – and in software that has always favored Intel in the past. It pays to be cache-rich.

We might expand this testing in time for our full stack retest, but we’re not exactly sure what test we could add at this point. GPU acceleration was added to LR 8.4, so some processes will naturally involve that, and thus would no longer be ideal for straight CPU testing (the export test above does not touch the GPU). We thought TIFF output may be an option, but our comparison tests showed no difference between their export speeds. If you have ideas of tests that are realistic but would only involve the CPU, please feel free to let us know.