Earlier, I mentioned that one of the reasons I love checking ASUS out at CES is that it tends to unveil products that manage to surprise me, and sometimes even throw me for a loop. While the Transformer AiO is an interesting product in its own right, it’s the TAICHI notebook that takes the cake for interesting design.

By most regards, TAICHI hits all of the marks you’d expect an Ultrabook to, but there’s one feature that will help this one stand out in a crowd: dual-screens. Now, I admit this is a feature that caused me to do a double-take at first, but who could blame me? We’re talking about two displays on a single notebook. No – we’re not talking screens that fold out to create two displays; rather, TAICHI’s hood has a display on either side. 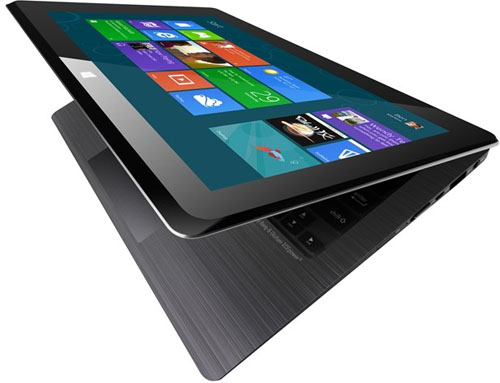 In the shot above, what you’re seeing is the back of the Ultrabook. When oriented like a normal notebook, you’ll see a screen on the other side as well. While this design might strike you as being a little strange, ASUS backs it up with many different usage scenarios. First, consider a business meeting where your client is looking at one screen while you’re looking at the other. These screens could be mirrored, or unique. Second – maybe you want to chill out and use a tablet, not a notebook. Close TAICHI’s hood and that’s exactly what you’re left with.

It’s a product like TAICHI that really makes me regret not getting down to Vegas for CES this year, because it’s one I really feel like I need to go hands-on with. It’s definitely an interesting concept, and the usage scenarios are good. It’ll be interesting to see if this unique design is a little “too” unique, or if it happens to surprise us all and catch on.