It may not have been obvious a year ago, but it is now: many are banking on Android as being the future of on-the-go gaming. Heck, it’s the future for inexpensive gaming in general. We’ve seen OUYA reach major success even before its launch, and recently, GameStick has come along to give us another interesting solution. One thing both of those solutions lack, however, is true portability. Some people simply like a real gamepad while on the go – perhaps something even a PSP Vita can’t provide. For that, we turn to NVIDIA.

Right off the top, let’s reiterate the fact that this is NVIDIA we’re talking about. The company hasn’t been a stranger to releasing interesting non-PC hardware peripherals in the past (look no further than 3D Vision), but this is the sort of product we’d quicker expect to see from Razer. However, NVIDIA has a couple of strong advantages when it comes to a product like this. It already has very tight relationships with many Android developers, and it actually creates the processor that powers the entire thing (it uses the company’s just-announced Tegra 4). And… it doesn’t look too bad, either. 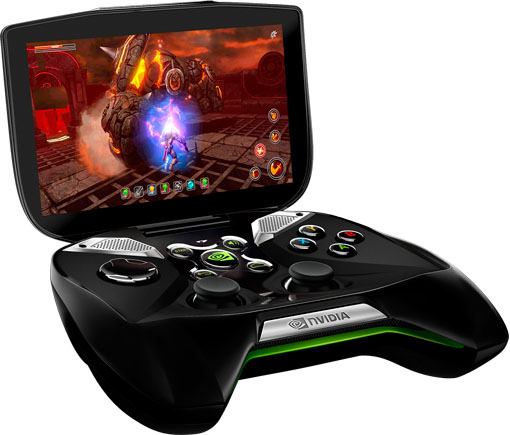 Essentially, “Project Shield” is an Xbox 360-like gamepad with a 5-inch screen that extends out of it (it can be folded down into the gamepad when traveling). You can use the screen like a normal tablet, but then use the gamepad when you want to use the device for its main purpose. Oddly, it doesn’t immediately appear that the screen can be detached from the gamepad, though I’d hope it’d be possible.

It’s probably obvious that Project Shield is able to play most games for Android, but it brings along another, even more interesting perk: it can also play PC games. Now, there’s a caveat to this. Your PC has to be equipped with a GeForce GPU, and the gaming (obviously) has to be done wirelessly. Before you go and think that no PC game would play well this way, it might help to know that NVIDIA has been working with Valve to make sure that Project Shield interoperates with Steam at an enhanced level. Given many games on Steam now officially support gamepads, perhaps we’ll see those titles also officially supported for Project Shield.

Pricing and a release date have not yet been announced. This is a perfect example of a product I didn’t see coming, especially from NVIDIA, but I’m excited to see how it plays out once it’s finally launched. There’s really nothing that strikes me odd about the product, so we’ll have to wait and see if this is what the market actually wants.