As we’d expect, 2013’s CES has brought us many exciting stories so far. But beyond the 4K televisions and Ultrabooks, we strive to bring you the lesser-heard news tidbits as well. As we reported earlier on Synology’s latest DSM beta, it’s fair that we talk about a new release from a competitor that I’ve also come to enjoy over the years; QNAP, with its latest 3.8.1 NAS firmware.

New to 3.8.1 is the company’s Surveillance Station Pro capability, and with that, over 1400 supported IP cameras.  Also new are updated apps for iOS and Android, a new DJ Station, Video Station and TV Station.  Updated in the new firmware is the popular Photo Station and Music Station 3. 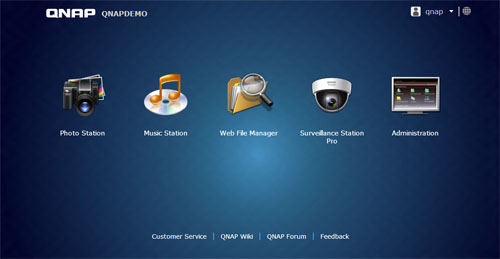 Quoting QNAP’s Product Marketing Director, Ivan Hsu, “QNAP has been focusing designing innovative NAS products with high end features that can fit any IT budget.  During these challenging economic times QNAP has continued on a path of strong growth due to our unrelenting commitment to excellence and delivering products that meet and exceed the expectations of our broad range of customers.  In addition, we continue in the pursuit of challenging ourselves to create the most technologically advanced storage products in the world.”

We haven’t taken a look at a QNAP product in some time – early 2008 to be exact – but its a company I speak with regularly at local VMware Community gatherings.

Also new from the company is its TS-x70U-RP series of NAS.  If the naming of the device turns you off, the specs wont.  10GbE ready, the TS-x70U-RP is capable of reaching over 1,800 MB/s throughput and over 180.000 IOPS.  Incredible.  Pricing was not relayed to us but we were told it would be affordable… at an “exceptional price.”