ROCCAT doesn’t look to be the only company set to show off a new mechanical keyboard at CES; Rosewill’s jumping on board as well, with its Helios RK-9200. Rosewill has become a bit of a de facto standard as far as mechanical offerings are concerned, as the company doesn’t focus too much on bling but rather simply delivering a well-built, easy-to-use keyboard that feels great to type on. The RK-9200 follows in these footsteps, but does add a bit of flavor. 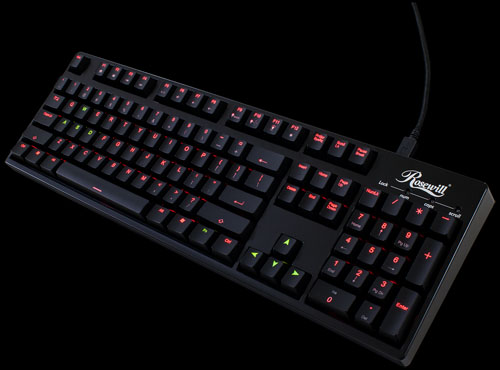 Rosewill touts the RK-9200 as being the “first” dual LED backlit mechanical keyboard, although that’s a statement we can’t immediately back up ourselves. Still, this tackles a problem I’ve had with keyboards as a whole for a while, where you may like the looks of a model but not the color of backlighting the company chose. With the RK-9200, users will be able to choose between red or green and choose between five brightness levels. Sounds good to me.

While not quite as advanced as ROCCAT’s mechanical we talked about earlier, Rosewill’s latest offering does look sharp, and it should appease those who’ve wanted either an RK-9000 or RK-9100 but preferred different backlighting. Not surprisingly, pricing is not yet available, but should be in the weeks to come.