Earlier this week, NVIDIA announced its Tegra 4 processor – one that’s considerably faster than the previous generation and more power efficient to boot. Since then, other vendors have remained a bit quiet, but Samsung broke that silence today by announcing its latest Tegra competitor: Exynos 5 Octa. By the name alone, this is an interesting chip, sporting eight separate cores – something even our desktop processors are lagging behind on (not that the two can be compared, mind you).

To call Exynos 5 Octa an “octa-core” is a little inaccurate in the sense that it’s not a singular chip with eight cores. Instead, it’s designed using ARM’s big.LITTLE design, pairing both a high-performance quad-core with a power-efficient quad-core. For big tasks, the Cortex A15 clocked at 1.8GHz will be engaged, whereas for modest ones, the 1.2GHz Cortext A7 will be called into action instead. 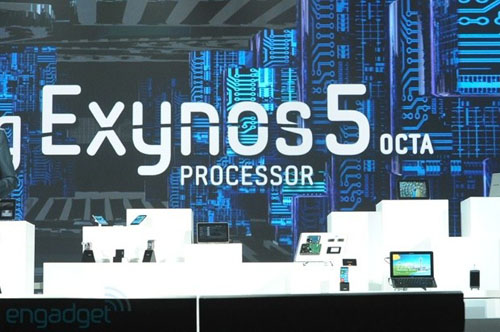 More specifics are not given, though Samsung does claim that Exynos 5 Octa will offer “twice” the gaming performance of anything currently available. Given that Tegra 4 isn’t currently available yet, we’d assume that the company is not counting it, which should keep NVIDIA’s latest chip in the lead.

On paper, Exynos 5 Octa is an interesting beast, but it’s a little unfortunate that it’s not a true eight-core design. Had Samsung been able to create a singular chip that could simply have the ability to shut off all cores that are not needed, it could have been a much more impressive launch. However, if developers can take advantage of both quad-core chips at once – such as to relegate certain gaming tasks to the smaller quad-core – then things could change.

No release date is mentioned, but it seems likely that phones could come equipped with the chip this summer.