No device has opened up the home network like the wireless router.  With most new homes today still being constructed with networking as an afterthought, wireless is often considered the only choice for network access around the home.  Depending on the distance, sometimes a wireless router simply won’t reach.  It’s times like these that power line adapters truly earn the respect they deserve.  We’ve even taken a look at a set in the past.  Almost six years ago, I looked at a set of Actiontec MegaPlug AV200 powerline adapters.  Since then, the technology has advanced slowly but always for the better.  A leader in this space has been TRENDnet.

A global leader in high quality yet affordable networking solutions for home users and small businesses alike, TRENDnet has chosen the 2013 CES in Las Vegas, Nevada to debut their TPL-407E Powerline 500 AV Nano adapter.  If that seems like a mouthful to say, it’s because it is.  Setting this powerline adapter apart from the majority of other similar products is the addition of a built-in outlet – no longer will you have to sacrifice an outlet to use a powerline adapter.  With a theoretical throughput of 500 Mbps, the TPL-407E can support up to seven additional powerline adapters, allowing your entire house to connect to your network in rooms that wireless either won’t reach or isn’t optimal. 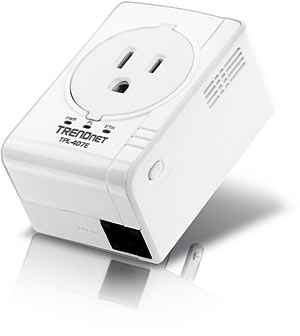 Another great benefit of the TPL-407E is the size.  Measuring 3.07 x 2.17 x 2.32 inches, the adapter is small compared to some of the other powerline devices on the market.  The TPL-407E is available online and at TRENDnet retail partners now while the TPL-407E2K, a kit consisting of two adapters, will be available this coming February.  Costs are $69.99 and $124.99 respectively.