This year’s CES has proven fruitful so far where product announcements are concerned, and naturally, Intel has had a big hand in that. This CES comes just two months after Intel launched its 12th-gen Core processors, so it was largely expected that we’d see the company fill some gaps in the lineup. And… did it ever. Across desktop and mobile, the company is using CES as a launchpad for dozens of new SKUs.

When we took a look at 12th-gen Core in November, there were only six SKUs available, with three of those simply being the IGP-less version of the others. Now, we see this Core lineup fill up with models to suit many different needs, including low-end, and low-power. There’s a lot to digest here, so let’s start with a look at the new high-perofrmance desktop SKUs: 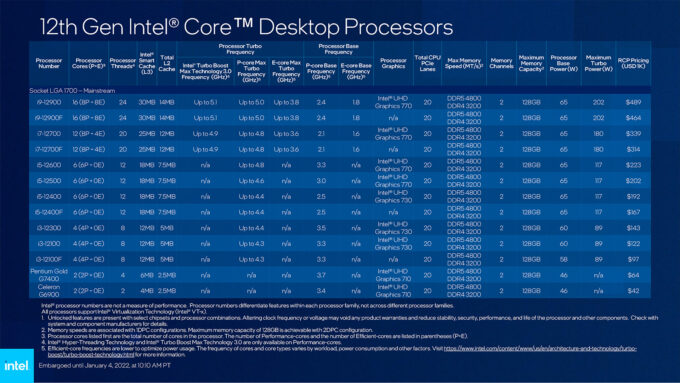 It’s a little unfortunate that this slide doesn’t include the six previously-released SKUs for better context, but as you can see, things are a little crowded as-is. If you want to reference those previous six SKUs, look here. Whereas those previous models catered to those vying for the best possible performance, these new SKUs retain similar configurations, while scaling back enough to make a notable improvement to power consumption. Notably, they still offer support for up to 128GB of memory, have 20 PCIe lanes, and support either DDR4 or DDR5.

To single one model out, the i9-12900 retains the same configuration as the i9-12900K (and KF), but loses some top-end frequency with Turbo Boost, and also the P and E core bases. A solution like this 12900 non-K is pretty intriguing, because it would allow someone to get by easier with a more modest cooling solution – although you’d still want it to be at least dual-rad AIO, or beefy air cooler. Whereas the 12900K could hit 241W at full load, this non-K model peaks at a much more modest 202W.

All six of Intel’s previously-released 12th-gen Core chips sported both Performance and Efficient cores, but this update shakes things up by offering up some models that forego the Efficient cores entirely. The E-less design is found on 2-, 4-, and 6-core models – ignoring the previous K and KF models of the 6-core 12600 which do in fact include them.

As mentioned before, Intel is also offering T variants of many SKUs, all of which are spec’d at 35W base TDP: 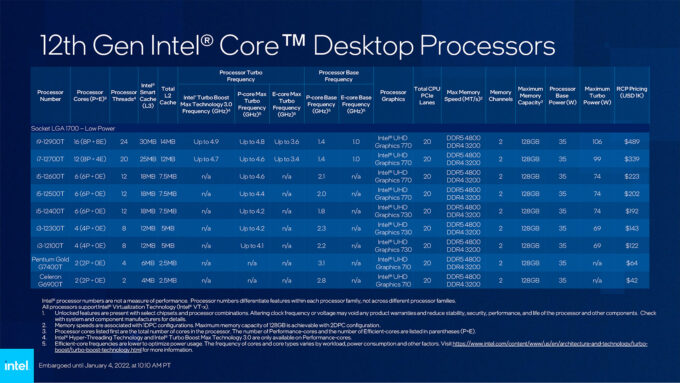 These T models would be great for those with smaller form-factor builds, or builds that don’t have what you could consider great cooling. Whereas the top-end 12900K hits 241W at peak, the 12900T retains the same core configuration, but drops peak frequencies, to top out at 106W instead. Where cooling is concerned, that is an enormous difference.

Speaking of cooling, Intel is also releasing a handful of new coolers that will be provided alongside certain SKUs right inside of the box: 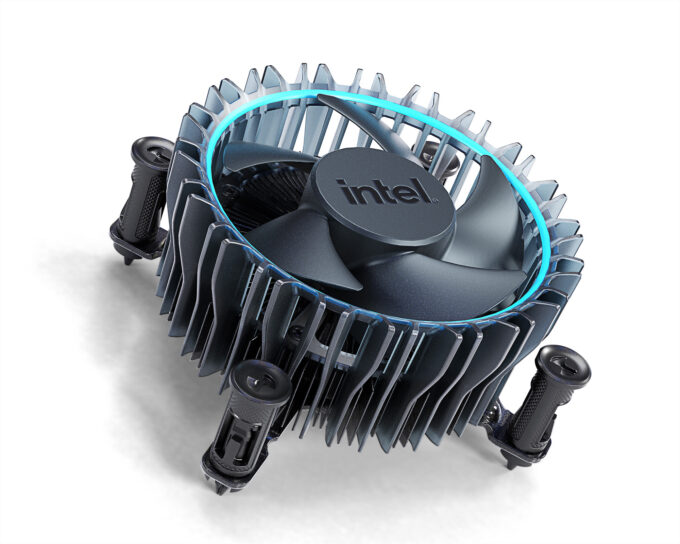 For Core i9 processors, the Laminar RH1 will be included, which offers aRGB lighting, near-silent performance, and a larger base for improved efficiency. For i3~i7 SKUs, you may find the Laminar RM1 cooler, another that promises quiet operation, but not as quiet as the RH1. Finally, there’s the Laminar RS1, which is the simplest of the bunch, included with Pentium and Celeron SKUs. 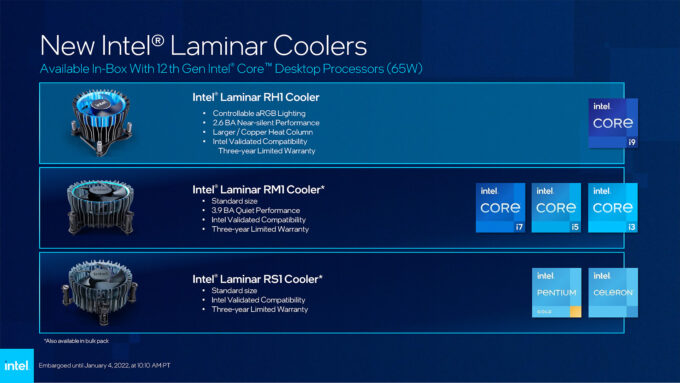 It should be clear that any in-box cooling solution isn’t going to hold a candle to improved third-party coolers, but for those with lower-power solutions, these new coolers will likely fit the bill. We have to say they look really slick, as well, for as much as that matters. Intel’s in-box coolers used to have a bad reputation for not being sufficient enough on either the performance or aesthetics front, but these ones at least look good.

Before we move onto a look at the mobile CPUs, on the desktop side, these new SKUs help usher in the launch of three new chipsets to complement the previously-released Z690. These include H670, B660, and H610: 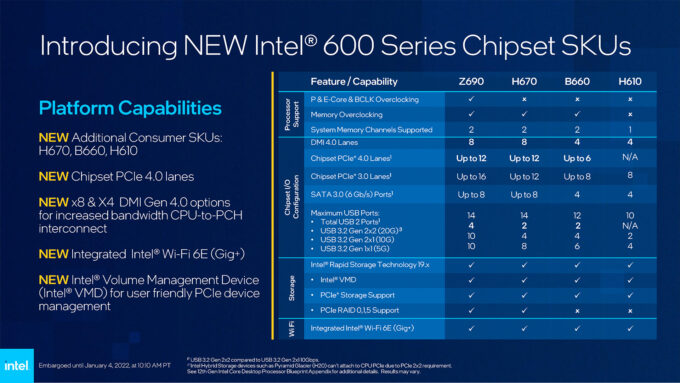 The slide above makes it really easy to quickly understand the differences between all four chipsets. Notably, full overclocking support is going to require the enthusiast Z690 chipset, so if overclocking doesn’t matter to you, nor does additional USB functionality, you should be fine to choose a different chipset. Also notable is the fact that if you opt for the lower-end H610 chipset, you’ll forego 2-channel memory – a limitation that caught us off-guard, but has apparently existed in this particular chipset series since H310.

If you’re more intrigued by mobile than desktop, then don’t worry, Intel has you covered. In fact, just as we saw with the new desktop releases, there are an unbelievable number of new SKUs for notebooks.

For high-performance notebooks, Intel is offering eight different SKUs, with the top-end i9-12900HK sporting six Performance and eight Efficient cores, with an ultimate peak of 5.0GHz on the P cores. If you need to take advantage of Intel’s vPro technologies, you will need to decide your Core model carefully, as only select ones will support the full feature set. 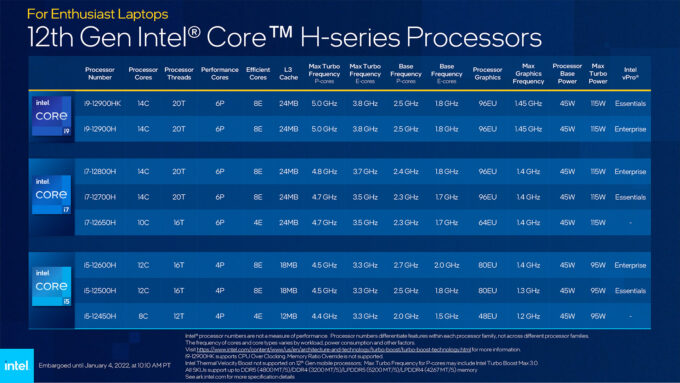 For performance thin and light notebooks, Intel offers seven models that stick to a much more modest power envelope than the high-performance parts. Here, the top-end part once again includes six Performance and eight Efficient cores, and as before, your vPro needs may dictate which chip you’ll want to go with. 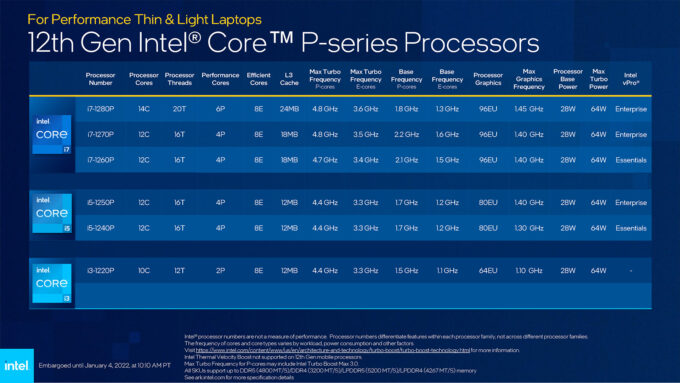 If one of the most crucial aspects of your notebook is long-lasting battery-life, then the U-series might be for you. Intel is offering two complete sets of seven SKUs that come in either 15W or 9W (base) TDP variants. These designs are actually pretty interesting, since at best, these chips offer 4x the number of Efficient cores than Performance cores. With these configurations, Intel is really going hard to do battle with the likes of Qualcomm, and its Snapdragon-on-Windows notebooks. 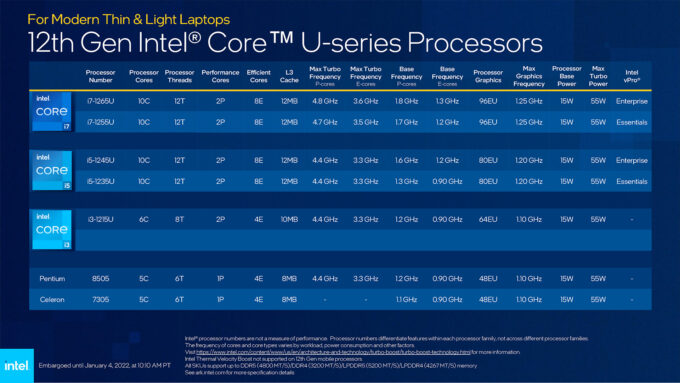 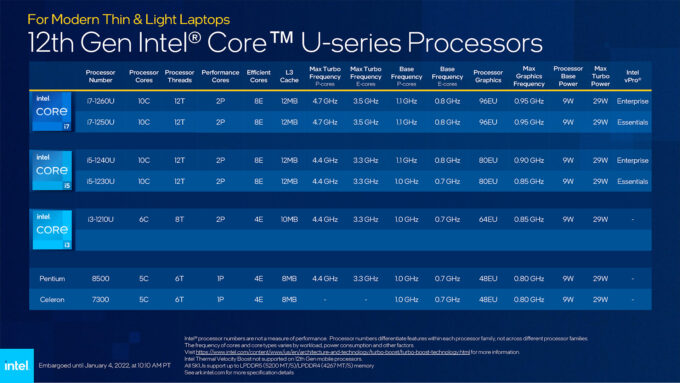 Intel sure has been busy – and to think, we still haven’t covered everything (this focus was just on the company’s latest processors). We look forward to seeing these new SKUs hit the market. On the desktop side, it’s great to see so much of Intel’s lineup filled out, and on the mobile front, it’s really interesting to see unique configurations that ensures it’s got its competitive bases covered.

Now… are we the only ones clamoring for an updated Core X-series lineup? It’s now been over two years since the release of the Core i9-10980XE!